Roger Federer eases into 4th round at Wimbledon despite dropping set 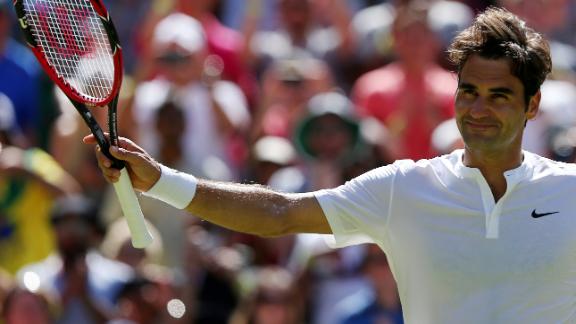 LONDON -- Seven-time championRoger Federer had no trouble moving into the fourth round at Wimbledon despite losing a set, defeatingSam Groth of Australia 6-4, 6-4, 6-7 (5), 6-2 Saturday at the All England Club.

Groth did have his moments, including a 147 mph (236 kph) serve that is the second fastest in Wimbledon history. Federer didn't return it, but he managed to get some racket on it, making it a service winner instead of an ace.

"I think it's about keeping a short backswing on the return, trying to see it," Federer said of his tactics against the big-serving Australian. "And then also sometimes guessing the right way at the right times, remembering patterns where he's gone to, where he's been successful, and where not."

To the locals' delight, 2013 Wimbledon championAndy Murray beat No. 25 Andreas Seppi of Italy 6-2, 6-2, 1-6, 6-1. Early in the third set, Seppi got a visit from a trainer for his lower right leg, and ended up taking six games in a row. Murray received turnabout-is-fair-play treatment for a stiff right shoulder after falling behind 1-0 in the fourth set, and then took the last six games.

In an early match, the curse of beating Rafael Nadal at Wimbledon struck again.

Dustin Brown, the German qualifier with the dreadlocks who surprisingly beat the two-time Wimbledon champion from Spain in the second round on Centre Court, lost in his very next match.

He is the fourth man in a row to eliminate Nadal early at the All England Club and then fail to advance in the next round. All four were ranked outside the top 100 in the world.

"Obviously having the pleasure and being able to play on Centre Court and then to play a match like that (on Thursday), doesn't make a difference if I lost today or not, no one will ever be able to take that away from me," said Brown, who lost to 22nd-seeded Viktor Troicki of Serbia 6-4, 7-6 (3), 4-6, 6-3.

Brown, whose father is Jamaican and mother is German, reached the third round at the All England Club for the second time in his career, but he has never been any further. He also made it that far in 2013.

Isner beat Nicolas Mahut 70-68 in the fifth set in that epic match five years ago.

Vasek Pospisil also advanced to the fourth round, as did No. 23 Ivo Karlovic and No. 20 Roberto Bautista Agut.

Federer: I'm very pleased
Roger Federer talks about his four-set win over Sam Groth to reach the fourth round at Wimbledon.