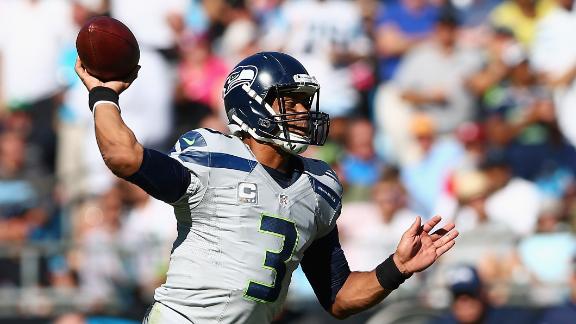 A story posted earlier this week by Bleacher Report cited interviews with several Seattle players, who told the website that some African-American players on the Seahawks think that Wilson "isn't black enough."

"About me not being black enough, I don't even know what that means," Wilson said. "People were trying to find ways to knock us down and distract us, but there's no doubt we're more together than ever before.

"We're probably the closest we've ever been. We keep swinging, and we keep believing in each other and our coaching staff."

Other Seahawks players also addressed the issue in the locker room after Wilson led Seattle on an 80-yard touchdown drive late in the fourth quarter to beat the Carolina Panthers13-9.

"Until someone in this locker actually says something negative [about Wilson], we just take that with a grain of salt," cornerback Richard Sherman said. "Anyone can make up anything and say a source said it. I don't think anybody on this team feels that way. We support our quarterback. He fights for us every game."

Seattle receiver Doug Baldwin, who had six receptions for 61 yards Sunday, said the team stayed together after back-to-back losses and the surprising trade of receiver Percy Harvin to the New York Jets.

"Everyone in this locker room knows it's been a rough couple of weeks for us," Baldwin said. "Obviously, it was emotional with everything that's been said, so this was a true character win for us. We showed we're committed to each other."

Wilson said he never doubted that his teammates are behind him.

"We're the type of team that when our backs are against the walls, we're going to keep fighting," Wilson said. "It's a huge win because of the fashion we won. To come up big at the end was pretty special, and our locker room was pretty fired up about that."

Wilson also said he knows who he is as a person, no matter what may be written that causes controversy.

"I believe I'm an educated young male that's not perfect but tries to do things right," Wilson said. "I try to lead by example and help others. That's all I focus on, and that's all I know."

Wilson on Seahawks' Win
Russell Wilson discusses Seattle's 13-9 win over Carolina, in which he threw the game-winning touchdown to Luke Willson with under a minute to play in the fourth quarter.