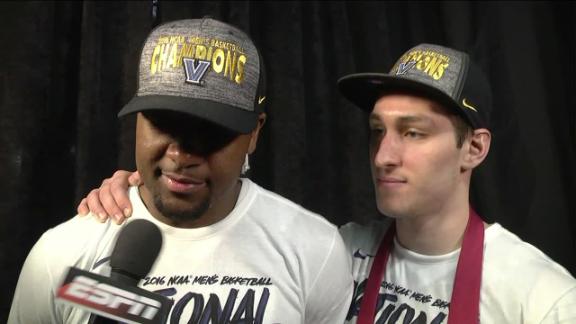 HOUSTON -- Ryan Arcidiacono grew up outside of Philadelphia as a Villanova fan and then played more games than anyone else for the Wildcats.

In his 144th and last game for Villanova, with his last pass, he became a national champion and Final Four Most Outstanding Player.

The unselfish point guard was dribbling toward the basket with the clock winding down and defenders closing in when he heard Kris Jenkins calling for the ball from behind. Arcidiacono passed to his open teammate, whose 3-pointer beat the buzzer for a 77-74 victory over North Carolina on Monday night in the national title game.

"I wanted to be aggressive. If I could get a shot, I was going to shoot it," Arcidiacono said. "But I heard someone screaming in the back of my head. It was Kris. I just gave it to him, and he let it go with confidence."

The Pennsylvania kid born nine years after Villanova's only other title in 1985 -- and with Rollie Massimino watching the Wildcats win another championship -- scored 16 points against North Carolina after scoring 15 in their record semifinal victory over Oklahoma.

"Ryan Arcidiacono, he's one of the best players I've ever played with," Jenkins said. "For a senior to get the ball and make the right play and not try to shoot the ball in double coverage just shows a lot about him and what he's about and how he's just all about winning."

Arcidiacono savored every moment of the championship celebration on the court, hoisting the trophy above his head before he and his teammates stopped to watch the "One Shining Moment" video montage when it was shown inside the stadium. Before walking off the podium, the guard scooped up two big handfuls of confetti, tossed them into the air and enjoyed another shower of the colorful strips as he walked down the steps.

The senior guard hugged numerous people and took pictures with Villanova family and friends. He eventually cut off the last piece of the championship net and was the one carrying the trophy when the team left the court.

Villanova had erased a five-point halftime deficit and led by 10 with 5:29 left. The Tar Heels, the only No. 1 seed to make it to the Final Four, got even when Marcus Paige made a double-clutch 3-pointer with 4.7 seconds left.

The Wildcats called timeout, but little had to be said before they went back on the court. Everybody in the huddle knew what play they would run.