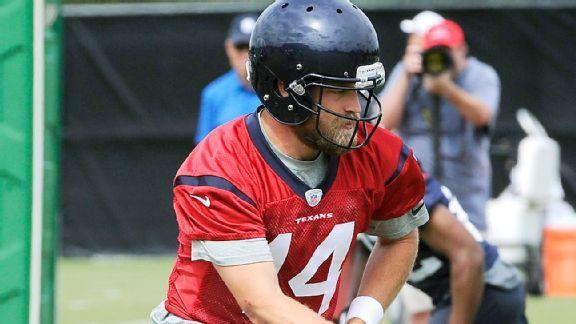 HOUSTON -- The competition is over. Ryan Fitzpatrick is the Texans' starting quarterback.

Texans coach Bill O'Brien announced his decision to the team Tuesday morning and then at his news conference following Houston's first day of mandatory minicamp.

As expected, wide receiver Andre Johnson did not attend Tuesday's practice. Outside linebacker Jadeveon Clowney returned to Houston for his rehabilitation after having sports hernia surgery Thursday. And with the starting competition finished, the Texans narrowed their field for their backup quarterback, too. Houston released quarterback T.J. Yates, sources said. Yates will have to go through the waiver system before becoming a free agent.

Can't thank the Texans organization and the city of Houston enough! We've had some great memories and I will always call Houston home.

- T.J. Yates (@TJ_Yates) June 17, 2014O'Brien said he felt it was important for the team to know who its starting quarterback was heading into the mandatory portions of its offseason.

The Texans signed Fitzpatrick in free agency shortly before trading Matt Schaub to the Oakland Raiders. Last season, Schaub lost his starting spot to Case Keenum midway through the season.

A former starter for the Buffalo Bills, the nine-year veteran started nine games last season for Tennessee after Jake Locker was injured. Fitzpatrick threw for 2,454 yards and 14 touchdowns last season.

"Everybody on our team every single day has to go out there and earn their spot on the team, earn their starting spot," O'Brien said. "So quarterback is no different. We have confidence in his ability to lead our football team. He's done a really good job in the offseason of picking up our system and he's executed it well."

"With all three of those guys we need just a little bit more consistency," O'Brien said. "It has nothing to do with effort or work ethic. Those guys have all worked extremely hard. They've all done what we've asked them to do."

During his news conference Tuesday afternoon, he gave no indication the team was about to release Yates.

The Texans drafted Yates in the fifth round in 2011. He was the starting quarterback in the Texans' first playoff win as a franchise, when starter Schaub and backup Matt Leinart were both hurt.

Last season Yates won the backup job over Keenum, but threw an interception that was returned for a touchdown when he entered a game in relief of Schaub. After that game, Keenum, who had been inactive for every game prior, became the Texans' starter. He showed promise early on but went 0-8 in that role.