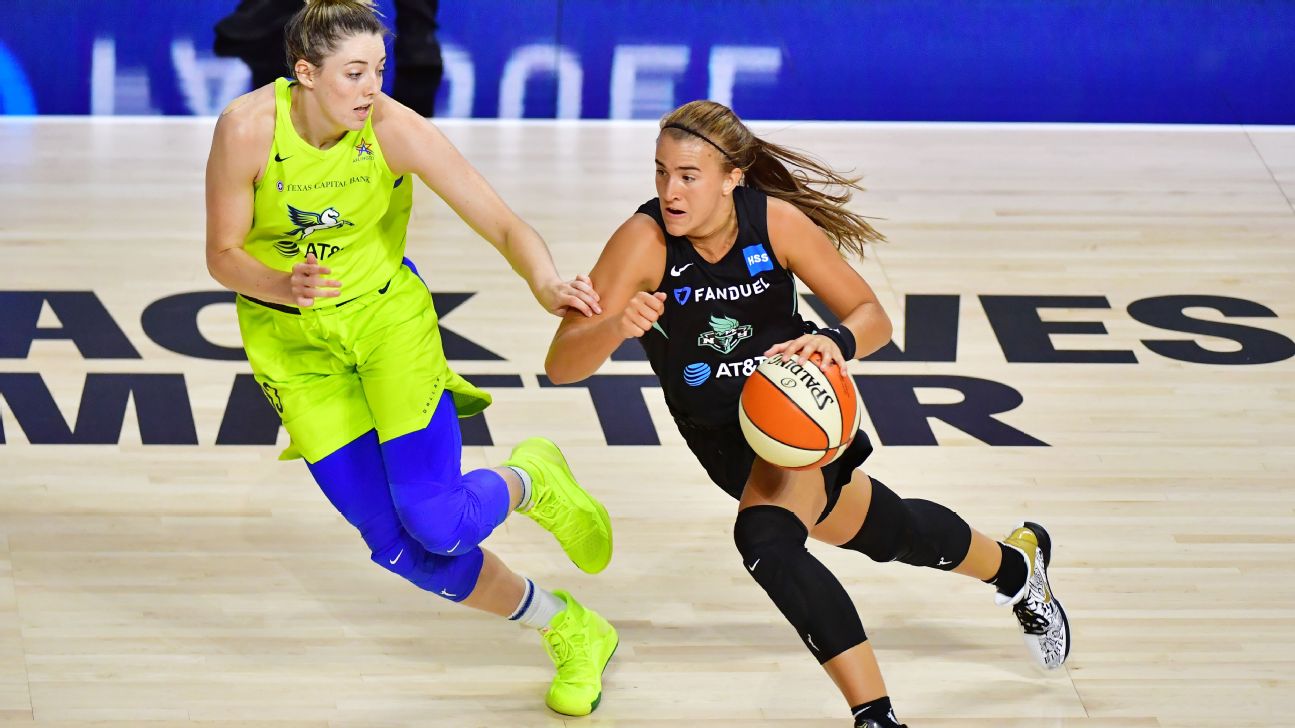 The New York Liberty's Sabrina Ionescu, the WNBA's No. 1 draft pick, came up big in her second pro game with 33 points, seven assists and seven rebounds Wednesday, but the Liberty fell 93-80 to Dallas and Satou Sabally, Ionescu's former Oregon teammate. Sabally was the No. 2 pick in the draft.

It was an impressive game for Ionescu, who had 26 triple-doubles in college and wasn't far off one on Wednesday.


"She had a heck of a game; she did everything she could to get our offense going," Liberty coach Walt Hopkins said. "She saw we needed a boost offensively and she went out and created one. The shots fell tonight and she did a great job getting to [the] rim and had an efficient game."

In Ionescu's debut Saturday against Seattle, she had 12 points, six rebounds and four assists, but was 4 of 17 from the floor, including 0-for-8 from 3-point range. Seattle is an experienced team and the preseason favorite in the league, so it was a tough opener for the rookie.

"I think my shot was a little bit rushed and I didn't have that much confidence," Ionescu said of facing the Storm. "Went back to practice and worked on speeding up my shot and getting it to where I want. I think that definitely helped a lot."

Against Dallas, a younger, less experienced team than the Storm, Ionescu was 11 of 20 from the floor and 6 of 10 from 3-point range.

"I definitely felt a little more like myself, more comfortable and more confident," Ionescu said. "Obviously not happy because we didn't win. We're still getting used to each other, we're still a team with a lot of new faces. It's just going to take some growing pains. My teammates know it took some growing pains at Oregon as well."


Ionescu is one of seven rookies on the Liberty, two of whom saw their first action Wednesday. UConn's Megan Walker, who tested positive for COVID-19 although she was asymptomatic, didn't arrive to the WNBA bubble until last week and started practicing on Monday. The No. 9 pick had two points in two minutes.

Louisville's Jazmine Jones, the No. 12 pick, missed the Liberty's opener because of an ankle sprain, but had eight points in 12 minutes.

"I thought they both did some good things," Hopkins said. "I just didn't think that either one was really at 100 percent, and it showed."

Meanwhile, the Wings bounced back from their opening loss to Atlanta. Sabally had 12 points and four rebounds for Dallas. In all, 10 rookies played in the game.

"It's awesome to be able to see all the rookies in this league," Ionescu said. "Hopefully we can continue to grow this league. It was awesome to see Satou on the floor, definitely weird not having her on my team. I miss playing with her, but she did great. She's going to fit into that team really well." 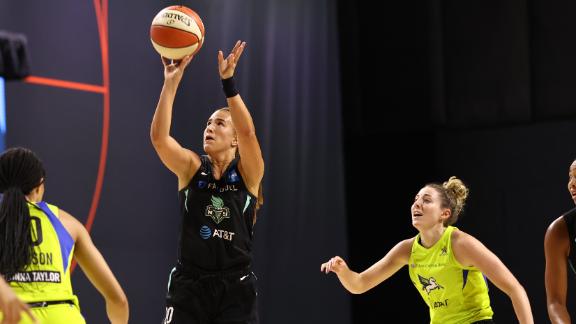