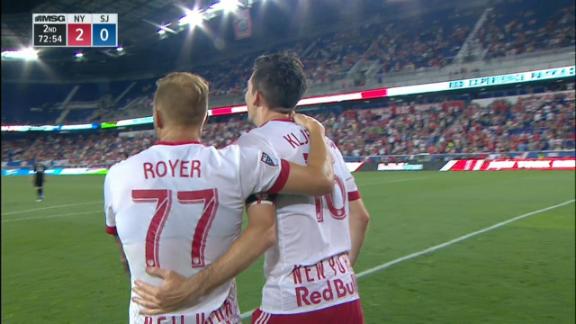 The Red Bulls also sent $150,000 in targeted allocation money (TAM) to Orlando along with their captain, whohas led MLS in assists and chances created in each of the past two seasons.

The acquisition of Kljestan, 32, sees Orlando City fill part of the void left by Brazilian legend Kaka, who recently announced his retirement.

Sources confirmed that Kljestan signed a new, two-year contract with Orlando, though it is unclear at present if he will remain a designated player or if his salary will be bought down with TAM.

That said, he will no doubt be expected to provide the kind of consistent attacking presence that saw him finish his time with the Red Bulls as the clubs' all-time assist leader with 51. Kljestan has also been durable, having played in 97 regular season matches during his three seasons in New York.

Kljestan was a finalist for the MLS MVP in 2016. He has made 52 appearances for the U.S., but was largely left out of the Americans' failed World Cup campaign, making only one substitute appearance in the final round.

This past MLS season, Kljestan scored two goals and added a league-leading 17 assists for a side that finished sixth in the Eastern Conference and was ousted from the MLS Cup playoffs by eventual champions Toronto FC, with Kljestan ejected during the second leg.

He will serve a two-match suspension at the start of the 2018 season as punishment for his clash with Toronto's Jozy Altidore and stadium security personnel.

Kljestan was initially linked with a move to Los Angeles FC or Minnesota United this winter, before word of the Lions' interest emerged last week.

For the Red Bulls, the move sees them trade their captain for the second year in a row, after dealing Dax McCarty to Chicago prior to the start of the 2017 campaign.

However, the Kljestan trade has its benefits for New York, both in terms of youth and finances. One source indicated that Kljestan was expected to make in excess of $1 million this season, so that will free up around $500,000 in cap space this year.

New York also lands a young attacking talent in Rivas, though the 23-year-old never quite lived up to his billing as a young DP, scoring five goals and adding five assists in 30 league appearances last season. Rivas will likely play in midfield, though he is capable of playing forward as well.

The Red Bulls also land Redding, 20, who was part of the U.S. Under-20 national team that took part in the 2017 U-20 World Cup. Redding had consistency issues in 2017, starting 14 matches, but the Red Bulls have a history of developing center-backs like Matt Miazga and Aaron Long, so a fresh start with New York could be just what Redding needs to take the next step.

Argentine clubAtletico Huracan said last month that the Red Bulls had agreed a club-record $6.25 million transfer fee for winger Alejandro Romero Gamarra, but personal terms have yet to be agreed. If Gamarra signs, the Red Bulls will still have one DP slot available after declining Gonzalo Veron's option after last season.

Orlando is rebuilding after the departure of club talisman Kaka, who was the highest-paid player in MLS, and Cyle Larin, who is pursuing a move to Europe.