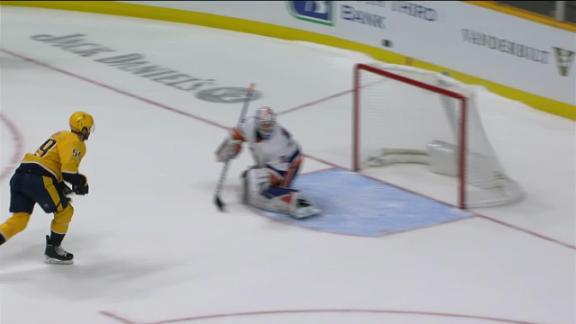 NASHVILLE, Tenn. -- - Filip Forsberg and Roman Josi scored in the shootout to lead the Nashville Predators to a 3-2 victory over the New York Islanders on Saturday.

Tanner Jeannot scored twice and Juuse Saros made 34 saves in regulation and overtime for Nashville, winners of three straight.


"We have a lot of confidence in (Jeannot)," Predators coach John Hynes said. "He's really picked up where he left off last year. We saw some good signs when he got called up and the games he played at the end of the season and into the playoffs."

Ilya Sorokin made 21 saves in regulation and overtime and Anthony Beauvillier and Oliver Wahlstrom scored for the Islanders, which had its two-game winning streak snapped.

"I liked our game," Islanders coach Barry Trotz said. "This is a hard building to come into. We were emotionally engaged right from the start."

Beauvillier scored the game's first goal at 14:46 of the opening period on a New York power play.

With Ryan Johansen in the box for holding the stick and Predators defenseman Mattias Ekholm having lost his stick early in the penalty kill, the Islanders moved the puck around the Nashville zone and Josh Bailey found Beauvillier just below the right faceoff dot, where he beat a sprawling Saros with a wrist shot up high.

Skating in the right side, Jeannot cut to the faceoff dot, where his wrist shot handcuffed and beat Sorokin.

The Islanders regained the lead at 12:04 of the second on Wahlstrom's power-play goal.


He beat Saros high to the blocker side just underneath the cross bar with a wrist shot from the left circle.

"I just tried to put myself in the best possible spot to get my shot off," Wahlstrom said. "This goalie is good, but he's a little small too, so we had to work to get pucks above him. The goalie was tough all night to get pucks by."

Jeannot made it 2-2 with 8:12 to go in the third when he redirected a pass from Matt Benning past Sorokin for his second of the game.

"The boys were just working hard, playing our game we want to play down low," Jeannot said. "(Benning) made a great play going wide and threw it to the net. I was standing there and it happened to go off me, so I got a lucky one."

It was the first two-goal game of Jeannot's NHL career.

Sorokin has started every game for the Islanders this season. The Islanders, who returned to action Saturday, had not played since Sorokin posted back-to-back shutouts of the Arizona Coyotes and Vegas Golden Knights last Saturday and Sunday. He is the first Islanders goaltender to post consecutive shutouts in back-to-back games.

Semyon Varlamov dressed for the first time this season and served as Sorokin's backup in the game.

With two power-play goals in four opportunities Saturday, the Islanders equaled their power play production for the first six games of the season.

"Our power play got us a point in terms of scoring our goals," Trotz said.

Entering Saturday, the Islanders had the league's 25th ranked power play with a 12.5% success rate.

The Predators play at Calgary on Tuesday, opening up a stretch of six-straight and nine of 10 on the road.