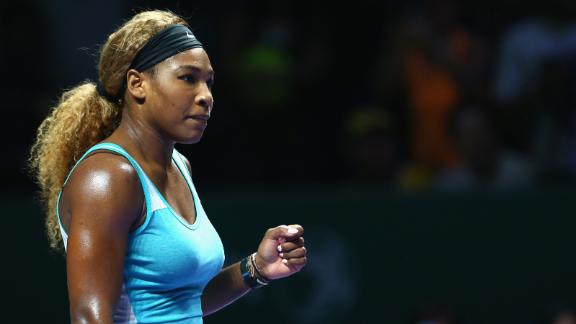 SINGAPORE -- After Serena Williams' embarrassing defeat to Simona Halep in the WTA Finals group stage, the American narrowed her eyes at the post-match news conference and said she was looking forward to having a chance to avenge the loss.

She didn't have to wait long. The pair will face off again on Sunday in the final of the season-ending championships after winning their semifinals on Saturday in contrasting fashion.

Williams beat Caroline Wozniacki in a thrilling contest 2-6, 6-3, 7-6 (6) to remain on course for a third straight title, while Halep swept aside Agnieszka Radwanska 6-2, 6-2 to put herself in a position for the biggest title of her career.

Halep beat Williams 6-0, 6-2 in the group stage, inflicting the American's heaviest loss in 16 years, and the 18-time Grand Slam winner joked about her diminished expectations for the rematch.

"My goal is to win three games," Williams said. "I'm going to go from there. Hopefully I can hold serve -- that would be good. Most of all, I hope to break once."

Halep has been the form player of the tournament, dropping only 27 games across four matches against top-eight-ranked opponents, and the Romanian was justifiably confident entering Sunday's final.

"I have to believe in my chances against her," the French Open finalist said. "I can think that I have the game to beat her.

"I will be nervous because it's the final, but I can't wait for tomorrow because my dream came true, so I have to do everything I can to win."

The irony of Sunday's final is that Williams only qualified for the semis because Halep lost in three sets rather than two in her final group match against Ana Ivanovic. Had the already-qualified Halep eased off and lost in straight sets, Williams would have been packing her bags.

The American's hopes of reaching the final looked just as tenuous throughout Saturday's clash with Wozniacki.

The Danish player served for the match at 5-4 in the third set, but Williams broke back and prevailed in the tiebreaker on her third match point after trailing 4-1.

It was a bittersweet win for Williams, who has developed a close off-court friendship with Wozniacki. The pair attended a Mariah Carey concert together on the eve of their semifinal.

"It was the first match I didn't feel great -- if you take (sister) Venus out of the equation -- where I wasn't happy after I won," Williams said.

"I really wanted to cry because Caro is so nice. We get along and we do so much together. She's like my little baby sister, from a different mother, and father, and different country."

Wozniacki reciprocated the affection, but being on the wrong end of a 10-1 head-to-head record meant she understandably wanted to see less of the world No. 1.

"I told Serena 'Can you just leave me alone? I love you, but stay away from the other side of the court. Quite frankly I'm sick of losing to you," Wozniacki said.

Twice before this year Williams had to come back from a set down to beat the Dane and she again made a slow start, taking only three points off Wozniacki's serve in the opening set and the frustration showed. After the seventh game, she repeatedly smashed her racket into the court, bringing a warning from the chair umpire.

"I don't know how many times I hit it but, boy, that racket will never do me wrong again I tell you," Williams said. "It was definitely legendary. I kind of lost my cool a little bit."

Wozniacki, who had a perfect 3-0 record in the group stage, took the opening set in 26 minutes and held serve to open the second.

"I really thought she was going to win because she was playing so well," Williams said. "She had a whole new strategy. I finally was able to kind of figure it out in the second and then I just was able to play better.

The momentum had shifted and, three games later, Williams created her first break points of the match, converting to take a grip on the set, which ended on Wozniacki's double fault.

The third set went on serve until the ninth game when Wozniacki made the first break. She served for the match but was only able to save one of two set points.

Williams survived a break point on her serve to go up 6-5. Wozniacki then held serve under intense pressure in the 12th game, saving one match point in a dramatic rally.

She started the tiebreaker confidently, but the relentless Williams wore her down with powerful serves and groundstrokes.

"Being so close and still losing, it really (stinks)," Wozniacki said. "It was just small things, but that is why champions are champions. All of them step up when it matters."