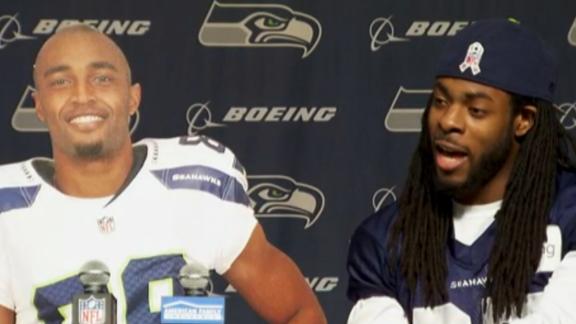 RENTON, Wash. --Seahawks cornerback Richard Sherman and receiver Doug Baldwin did a parody in front of reporters Tuesday, making a point of criticizing the NFL over fining teammate Marshawn Lynch $100,000 for not talking to the media.

Sherman and Baldwin's little comedy routine focused on what they view as the NFL's hypocritical policies over what players can and cannot say.

Sherman went to the lectern in the team's auditorium and stood next to a cardboard cutout of Baldwin, who was crouched behind it.

Baldwin: "No, they sure would not."

Sherman: "Geez, Louise. But you know who pays me a lot of money? Beats by Dre, the wonderful headphones I wear. But the league doesn't let me say anything about them. Doug, why is that?"

Baldwin: "I don't know. Sounds kind of hypocritical to me."

NFL policy states that players are not allowed to show or use items with non-NFL sponsor logos 90 minutes before or after games.

Sherman: "Yeah, it sounds a little bit hypocritical. It seems like we're in a league where they say, 'Players, please don't endorse any alcohol. No DUIs please.' But yet, a beer sponsor is their biggest sponsor. Doug, how do you feel about that?"

Baldwin: "Speaking of health, how do you feel about the NFL making you play two games in five days?"

Sherman: "On my gosh, geez. I almost didn't realize that because they've been talking about players' safety so much. Two games in five days doesn't seem like you care about players' safety much. It's a little bit much for me. But Doug, you look pretty healthy to me. Looks like you've been eating good. What kind of sandwiches have you been having?"

Baldwin: "You know, I like to eat fresh, so I eat my Subway [the sandwich restaurant that makes his cutouts]. And I wash it down with a bottle of Martinelli's [apple juice and cider]."

Baldwin: "Sounds about right to me."

Sherman: "Gotta make some money. Gotta not get fined. Any questions?"

Sherman and Baldwin walked off without answering questions. Sherman later apologized to reporters about it but said they wanted to make their point.

NFL players actually get 45 percent of the money generated from league endorsement deals, as that money then becomes part of the salary cap. A player like Sherman benefits indirectly from the league's Bose headphones deal and gets paid by Apple, which owns competitor Beats by Dre.

Sherman has also been a direct beneficiary of an NFL deal. He is the spokesman for Campbell's Chunky Soup, which is an official sponsor of the league.

Reaction To Sherman's News Conference
The NFL Live crew discusses Richard Sherman's news conference on Tuesday where he talked about sponsorships and speaking with the press.