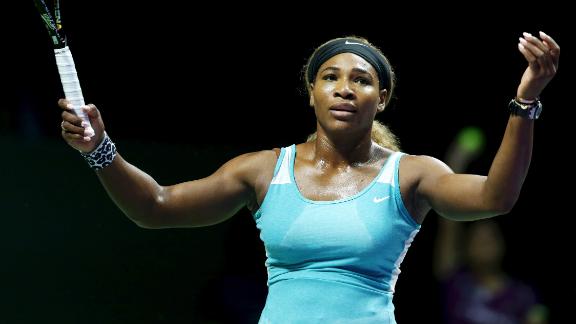 SINGAPORE -- Serena Williams was routed 6-0, 6-2 by Simona Halep at the WTA Finals on Wednesday in one of the most one-sided losses of the 18-time Grand Slam champion's career.

The last time Williams managed to win only two games in a WTA Tour or Grand Slam match was in 1998 when she was 16.

The loss in the round-robin match snapped Williams' 16-match winning streak at the year-end championships, where she is the two-time defending champion.

Williams lost dropped a 6-0 set to Anabel Medina Garrigues at Madrid in 2013.

The loss in the round-robin match snapped Williams' 16-match winning streak at the year-end championships, where she is the two-time defending champion.

"My forehand was off today," Williams said. "It's obviously gone on an early vacation. My serve was at best at the 10-and-under division of juniors."

The fourth-ranked Halep had never before beaten a player ranked in the top 3. In her previous two matches against Williams, both last year, the Romanian had won a total of seven games.

For a player who was ranked No. 47 two years ago, Wednesday's win over No. 1 Williams represented a new career high.

"It was my best match of my life," Halep said. "I played unbelievable shots. It means a lot this match. At an important time I played really well, and after today my confidence will be more high."

Halep, runner-up at this year's French Open, beat Eugenie Bouchard in her opening match and moves to 2-0 in the Red Group. Williams slips to 1-1 and will face Bouchard next.

Williams' defeat jeopardized her chances of finishing the year as the top-ranked player. Had she won Wednesday, the only way she could have lost the No. 1 spot is if Maria Sharapova won the title.

Now, just reaching the final may be enough for the Russian, depending on the result of Williams' match against Bouchard on Thursday.

Halep has been careful not to raise her sights too high at this tournament. She remained cautious even after two dominant victories.

Williams saluted Halep in a tweet after the match.

"I have confidence I can get to the semifinals," Halep said. "First I have to forget this day, but it will be hard to forget. I am so happy."

Williams served six double-faults in the opening set and had 36 unforced errors -- three times Halep's total. But the key to the result was the performance on break points. Both players had six: Williams took none of them while Halep converted five.

Williams was surprised by Halep's performance, saying "she has never played like this before."

"To be frankly honest, I am looking forward to our next meeting because she is going to make me go home, train hard and particularly train for her," Williams said.

Ivanovic had lost both her previous matches against Bouchard, at Wimbledon last year and this year's Australian Open quarterfinal. However she cruised through the first set, winning all but two points when getting her first serve into play.

At the end of the set, Bouchard's coach Nick Saviano had to give his charge a pep talk, urging her to show more enthusiasm and fight, and the Canadian responded with a much more competitive showing in the second frame.

The key moment arrived in the seventh game, when Bouchard saved five break points but double faulted on the sixth, handing Ivanovic the break. The Serb went on to take the victory that put her back in the running for a semifinal berth.

In Thursday's matches in the White Group,Caroline Wozniackimeets Agnieszka Radwanska in a clash of two players who won their opening matches, while Sharapova faces Petra Kvitova.

Serena: 'It Was Embarrassing'
Serena Williams talks about what went wrong with her game during her loss to Simona Halep at the WTA Finals on Wednesday.