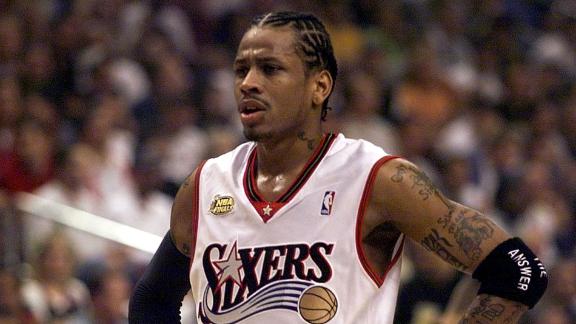 SPRINGFIELD, Mass. -- Only Allen Iverson could deliver a Hall of Fame speech that name-checked '90s rappers, referenced "Chappelle's Show" and thanked just about every person he met along his basketball journey. Only Shaquille O'Neal could follow that act with what amounted to a half-hour comedy routine that needled former coaches and teammates and included a soap-opera shout-out.

The Naismith Memorial Basketball Hall of Fame's Class of 2016 lived up to its lofty billing with an epic three-hour induction ceremony Friday night at Springfield's Symphony Hall, with Iverson and O'Neal stealing the show.

Iverson delivered a captivating 31-minute speech in which he overcame initial jitters during a memorable address that featured multiple standing ovations. Fans with No. 3 Iverson jerseys in the balcony cheered throughout.

Dressed in a black suit with a black shirt and tie, Iverson paused repeatedly to collect himself at the start of his speech while thanking his three presenters -- Larry Brown, Julius Erving and John Thompson -- as well as members of his family.

"[After] the incident happened in high school and all that was taken away ... no other schools would recruit me anymore," Iverson recalled, referencing a racial brawl at a bowling alley that landed him in jail. His conviction in the case was later overturned. "My mom went to Georgetown and begged [Thompson] to give me a chance. And he did."

He said he later left Georgetown only as "an OK basketball player."

"But once I started to listen to Larry Brown and take constructive criticism, I learned how much of a great, great coach that he really is. ... That's when I became an MVP," Iverson said.

In maybe the most memorable moment of his address, Iverson recalled his first time playing against his idol, Michael Jordan.

"Man, I wanted to be like Mike," Iverson said. "I remember the first time I played against him. I walked out on the court and I looked at him. And, for the first time in my life, a human being didn't really look real to me. You know what I mean? I don't know if you all watch the 'Chappelle Show,' but he talked about a certain incident where somebody's seeing Rick James. Like I literally seen his aura. It looked like he was glowing.

After the Jordan story, Iverson seemed to settle in. Nervously rocking at the start of his speech, he confidently thanked a Rolodex of coaches, owners, teammates and rappers.

"I want to thank Biggie Smalls, Redman, Jadakiss, Tupac and Michael Jackson for being my theme music throughout my career," Iverson said.

Twenty-two minutes into his speech, Iverson said, "The Philly fans," and that elicited a monster reaction from the balcony, which immediately engaged in an "MVP" chant.

Added Iverson: "My relationship with the fans in Philadelphia is like no other. I thank you all for the support over the years. ... You never jumped off the bandwagon, continued to support me like true fans are supposed to."

Iverson also paid tribute to "the ones that stuck by me throughout my journey." He cited "all the barbershop talk that my family had and all the arguments my friends had with people in the barbershop and hair salon.

Iverson closed his speech with a nod to the "guys who are not my friends anymore."

"I'm glad that you blew your cover for me to recognize that you [weren't] any good to my family or me. And I appreciate y'all for that. So if I make any more new friends, I know the signs," he said.

Not to be outdone, O'Neal took the stage for a punchline-filled speech as the final inductee of the night.

O'Neal referenced Luke and Laura from "General Hospital" and joked about his commercial endeavors, including how he sat in a "Buick I knew I couldn't fit in." Drawing laughter, O'Neal added, "Hey, they paid me $3 million. What did you want me to say, no?"

His speech had serious moments, like when he thanked his parents, Phil Harrison and Lucille O'Neal, for giving him the discipline and drive that drove his NBA dream.

"If I know my father, he's up there arguing with Wilt [Chamberlain] that his son is the best big man in the game," O'Neal said.

"One day when some father quizzes his sons on the greats of the game, I hope Shaquille O'Neal will be the answer,'' he later added.

"Kobe Bryant, a guy that would push me and help me win three titles in a row," said O'Neal. "He would also help me get pushed off the team and traded toMiami."

"For years, I never spoke to Yao. I thought there was a language barrier there," O'Neal said. "Then one game he hit me with a Hakeem Olajuwon bang-bang fadeaway. I said, 'Hey, Yao, nice move.' He said, 'Thanks, my brother.' I said, 'Whoa, whoa, whoa, whoa. You speak English?' He was like, 'Shaq, you never talk to me. Of course I speak English.'"

And O'Neal didn't miss an opportunity to make a free throw joke.

Yao won the opening tip and delivered a heartfelt speech that showcased his own sense of humor.

"When I heard that I was speaking first tonight, I thought that someone made a mistake," he said. "I think this spot belongs to the great Allen Iverson. You want to know why? Because I need practice more than him."

Flanked by presenters Bill Russell, Dikembe Mutombo and Bill Walton, Yao joked about being confused when Cuttino Mobley invited him over for soul food ("I thought he meant 'salty' food") and thanked Rockets fans for sticking by him through injuries ("I am a Texan and a Houston Rocket for life"). He also referenced his battles with fellow inductee O'Neal by noting, "Every game we played reminded me of the old saying, 'What doesn't kill you makes you stronger.'"

In his speech, Michigan Statecoach Tom Izzo made special mention of his players in attendance, including Golden State Warriors forward Draymond Green, who heard some boos on the red carpet on his way into the event but was cheered by the crowd when referenced by Izzo.

Izzo thanked his parents, Carl and Dorothy, for being his first mentors. The 90-year-old Dorothy was in attendance; Carl passed away in December.

Izzo briefly got choked up as he spoke of his father, who he said instilled in him a work ethic that remains with him today.

"The seven Final Fours and championship are just frosting on the cake," Izzo said.

Reinsdorf chronicled what led him to purchase the Bulls in 1984. It was a move he said legendary New York Yankees owner George Steinbrenner panned, telling him he would never make any money.

He enjoyed proving him wrong.

"It's been a great life,'' Reinsdorf said. "I know it's the fourth quarter, but I'm hoping for overtime."

Two of the themes on the night were family and journeys. That was the essence of Swoopes' speech. She said she was thankful for her path from tiny Brownfield, Texas, and that her cancer-stricken mother, Louise, was able to see it.