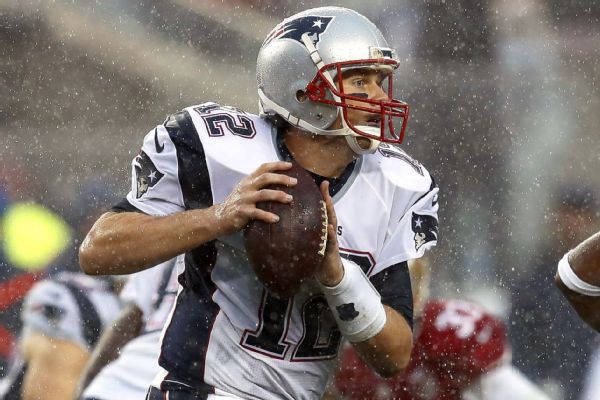 Patriots quarterback Tom Brady has swelling and soreness in his knee but will start Sunday against the Jets, a source told ESPN's Adam Schefter.

Another ailing Patriot, tight end Rob Gronkowski, also is expected to be active for the AFC East matchup in East Rutherford, New Jersey. Gronkowski had bruising and bleeding in his chest area from a hit he absorbed from Seahawks safety Earl Thomas two weeks ago but is well enough to play, the source said.

After playing last weekend against the 49ers, Brady sat out practices Wednesday and Thursday before returning Friday. He was a limited participant, and the Patriots later designated him as questionable on the injury report.

Sources previously told ESPN that there was minimal concern about Brady's availability for the Jets despite the missed practices.

Unlike Brady, Gronkowski did not travel with the Patriots for last weekend's win against the Niners, because he was still recovering from a big hit he took from the Seahawks' Thomas in a 31-24 New England loss on Nov. 13.

Gronkowski was limited this week and had been listed as questionable for the Jets. Sources told ESPN on Saturday that Gronkowski has made a lot of progress and team doctors are "optimistic" that he would play.

Three others Patriots listed as questionable for Sunday -- tight end Martellus Bennett (ankle/shoulder) and receivers Julian Edelman (foot) and Chris Hogan (back) -- all are expected to play Sunday, sources said.