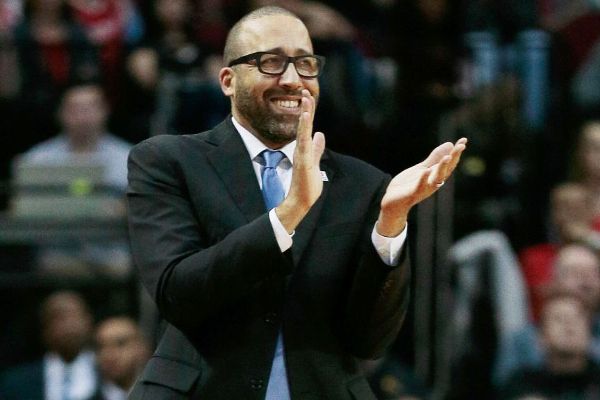 David Fizdale has agreed to a four-year deal to become the next coach of the New York Knicks, league sources told ESPN.

Fizdale on Thursday in New York met with Knicks owner James Dolan, who then gave his approval to president Steve Mills and general manager Scott Perry to enter into contract negotiations with Fizdale, league sources said.

Fizdale, who coached the Memphis Grizzlies into the Western Conference playoffs in his one full season as coach, was New York's primary target from the start of the search process.

Fizdale traveled back to his Los Angeles home Thursday night, and will be back to New York for a news conference early next week, according to league sources. Fizdale also expected to travel to Latvia soon to meet with Knicks All-Star center Kristaps Porzingis, sources said.

Mills and Perry fired former coach Jeff Hornacek shortly after the conclusion of the regular season. The Knicks were a combined 44 games under .500 in Hornacek's two seasons.

Fizdale was at the top of several teams coaching searches, including Charlotte, Orlando and Atlanta, league sources said. He interviewed for those jobs and all three were interested in advancing the conversation with him, sources said. Fizdale and the Suns had discussed deal terms before Fizdale moved on, hoping to get an offer from the Knicks, league sources said.

Fizdale is the Knicks' 11th coach since the 2001-02 season and the fifth since the start of the 2010-11 season. Management hopes that he can start to elevate a franchise that hasn't reached the playoffs in five seasons.

The Knicks prefer to build a young core around Porzingis, who isn't expected back until midway through next season as he recovers from a torn ACL. The Knicks own all of their future first-round draft picks and are projected to clear significant salary cap space in the summer of 2019.

The franchise's next coaching hire will need to "understand today's player" and be a strong communicator, Mills told reporters after dismissing Hornacek.

"Today's players are very different from yesterday's players," Mills said. "So, you have to be a person that understands who these guys are, where they come from, what their basketball journey is."

Fizdale was an integral part of two championships as a member of Erik Spoelstra's coaching staff with the Miami Heat -- where he spent eight years as an assistant coach. He built a reputation on his ability to connect and communicate with players, and strong teaching and tactical ability. He has strong relationships with several players from his Heat tenure, including LeBron James and Dwyane Wade.

"He's a brilliant basketball mind that has exceptional, gold-standard level communication skills," Spoelstra said recently. "He's one of my best friends. But I say that objectively. I just think he's one of the most talented coaches I've been around."

Fizdale engineered a 43-39 season in 2016-17, leading the Grizzlies into the playoffs before losing in six games to the San Antonio Spurs in the Western Conference playoffs. Memphis fired him amid an eight-game losing streak in November.

Beyond the losing, Fizdale's poor relationship with All-Star center Marc Gasol played a significant role in his dismissal. Fizdale benched Gasol in the fourth quarter of a loss to the Brooklyn Nets the night before Fizdale was fired. Gasol voiced his displeasure with the move after the loss.

"That's the league. The best player and the coach aren't always going to get along and that's just how it goes sometimes," Fizdale said later regarding his relationship with Gasol on ESPN's The Jump. "He was the best player on teams and I'm sure he didn't always love his coach. It's just unfortunate circumstances how it all played out on the stage. But that's just normal stuff. Whether we like each or not it's not about that, it's about winning games."

In his interviews with the Knicks, Fizdale stressed his willingness to learn from mistakes in the Grizzlies job and improve with the Knicks. His relationship with Porzingis will undoubtedly be important to his success in New York.

"I really just want to get back on this sideline and take what I learned from this last situation and really try to apply it to the next organization," Fizdale said during his interview with The Jump last December. "I'm not faultless in all this stuff. I don't want to sit here and act like that. I have mistakes that I made and things that I want to grow from and learn. So whatever kind of team that is -- whether that's a contender or a young team trying to be a contender or a young team trying to develop -- I'm ready to face it all."