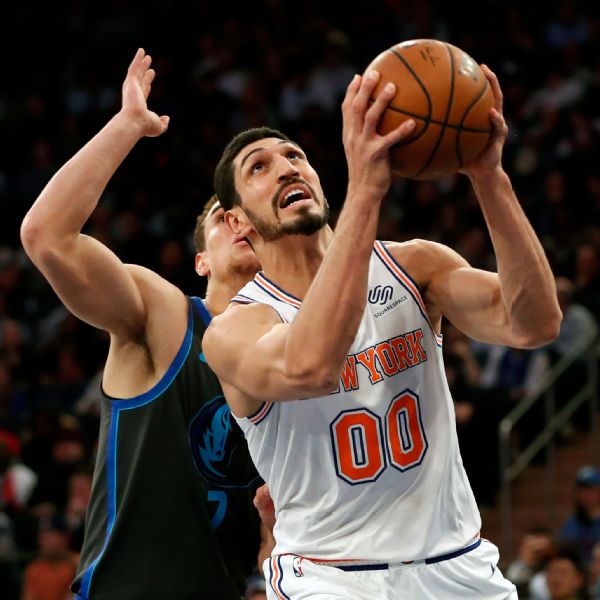 As the New York Knicks run out of time to find a trade for center Enes Kanter and his $18.6 million expiring deal, discussions on a contract buyout are expected to begin as soon as the deadline passes on Thursday at 3 p.m. ET, league sources told ESPN.

The Knicks have talked to teams about potential Kanter trades for the past several weeks, but his contract has proved difficult to move.

The 26-year-old has appeared in just three of the Knicks' past 12 games and has been vocal about his displeasure over the reduced role.

Kanter said late last month that he was "very disappointed" by Knicks head coach David Fizdale's decision to take him out of the team's regular rotation.

Fizdale has prioritized playing and developing younger Knicks in recent weeks, which meant that second-year center Luke Kornet and Mitchell Robinson would play ahead of Kanter.

More recently, veteran center DeAndre Jordan -- acquired from Dallas in the Kristaps Porzingis trade -- has started ahead of Kanter; Fizdale said he wanted Jordan to help the young Knicks learn how to defend.

Kanter averaged 14 points and 10 rebounds in 26 minutes per game this season but ranked last out of 68 qualified centers in ESPN's defensive real plus-minus metric.

His displeasure over the reduced role became a constant storyline around the club in recent weeks. Fans at home games would periodically cheer "We want Kanter!" during games.

Kanter said he appreciated the support of the fan base during home games, but acknowledged on Sunday that it was an awkward situation for the Knicks.