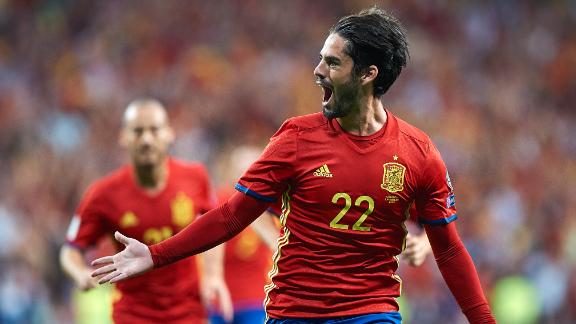 David Villa has been ruled out of Spain's match against Liectenstein after suffering an adductor injury in training ahead of the Tuesday game.

New York City FC striker Villa was a surprise inclusion in Julen Lopetegui's latest Spain squad after three years away from the international scene, and came on as a substitute in the 3-0 victory over Italy on Saturday.

The former Barcelona man picked up his 98th cap at the Santiago Bernabeu, but his hopes of adding to that tally against Liechtenstein are now gone.

An RFEF statement read: "Having monitored the strain suffered by David Villa in this morning's [Sunday] training session, it was decided that the player would leave the squad and not travel to Liechtenstein. The national team's medical services have informed his club.''

Villa, Spain's all-time record scorer with 59 goals, moved to Major League Soccer following the 2014 World Cup but his success in America earned him a return to the Spain squad under Lopetegui.

Villa was recalled to the Spain squad after scoring 19 goals and recording nine assists for NYCFC during the current 2017 MLS campaign.

Isco has become Spain's creative source
The FC crew hail Isco as one of the leaders of a Spanish revival that could make them a 2018 World Cup favourite.