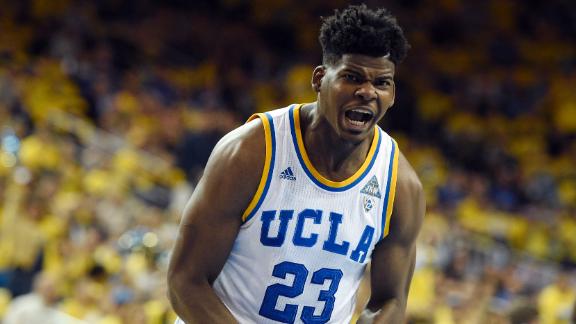 Tom Izzo has mixed emotions about Michigan State being ranked No. 1 in The Associated Press Top 25.

"I've been around long enough to not put much merit into something that happens in December when you really want it to happen in March or April," Izzo said Monday afternoon. "It's more for the fans and the media, but it's also a privilege and an honor for the program."

Michigan State jumped from third to a runaway first following losses last week by then-Nos. 1 and 2 Kentucky and Maryland. The Spartans received 62 first-place votes from the 65-member national media panel.

Kansas (6-1) moved from No. 4 to No. 2 and received a first-place vote even though it lost to Michigan State by six points last month in Chicago.

"I do think Kansas deserves that vote," Izzo said. "They probably outplayed us for over half of that game. And they have the most experience and the most depth."

North Carolina, the preseason No. 1, jumped from ninth to third and received a pair of No. 1 votes.

Iowa State moved up one spot to fourth and was followed by Kentucky, Maryland, Oklahoma, Duke, Villanova and Virginia.

Butler, at No. 18, and Utah, at No. 25, are the week's newcomers. Both teams were ranked earlier this season. The Bulldogs and Utes replace Syracuse, which was No. 14, and Texas A&M, which was 18th.

Syracuse made one of the biggest jumps into the poll last week, debuting at No. 14. The Orange were gone just as quickly. A home loss to Wisconsin and a loss to Georgetown in the first game of coach Jim Boeheim's nine-game suspension knocked the Orange out of the rankings.

After hosting Maryland-Eastern Shore (1-6) on Wednesday in an expected tuneup, the top-ranked Spartans face Florida (6-1) on Saturday. The school plans to honor its 1999-2000 national champion, which beat the Gators in the NCAA tournament final.

"How about that for dj vu? It's kind of coming full circle this week," Izzo said. "Fifteen years later, I think it shows our program has been pretty stable."

Michigan State is off to its best start since the 2000-01 season, when it set a school record with a 12-0 mark. The Spartans were No. 1 for two weeks that season and for a three-week span in November and December of 2013.

In addition to winning against the Jayhawks this season, the Spartans have beaten No. 15 Providence and No. 22 Louisville.

"I think we've earned the right so far to be considered one of the top teams because of the schedule we've played," Izzo said. "But there are a lot of teams that are right here or better than us right now.

"The good thing for us is that I think our ceiling is very high. Marvin Clark hasn't played much, coming back from his injury, and we're still a week or 10 days away from getting Gavin Schilling able to practice."

Schilling, a 6-foot-9 forward, was expected to be a key part of Izzo's rotation that potentially includes up to nine reserves. He has been out with a toe injury.

After playing two games at the Breslin Center this week, the Spartans will not be home again until Jan. 7 against Illinois. They will play at Northeastern next week followed by a neutral-court matchup against Oakland and Big Ten road games against Iowa and Minnesota.

Why some NYC Starbucks closed Sunday