Stamkos says he can relate to Tavares' contract situation 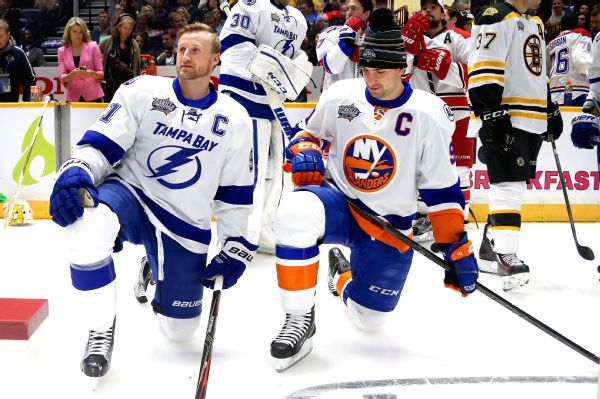 New York Islanders star John Tavares is an unrestricted free agent next summer. Where he'll sign his next contract has been a point of intense speculation, and his friend Steven Stamkos of the Tampa Bay Lightning has heard plenty of it -- specifically, that Tavares could take his talents to Tampa next season.

"I don't know where that rumor started, or where it came from. Obviously the guys have seen that 'John Tavares to Tampa' rumor," Stamkos, currently the NHL's leading scorer with 24 points, told ESPN on Wednesday.

Tavares and Stamkos have a relationship that dates back to their childhood, as teammates on the same summer league team that Stamkos' father coached. The assumption has been that playing with Stamkos would be a draw for Tavares, along with the Lightning's Stanley Cup contending status and the relative niceties of playing in Florida.

But Stamkos said he hasn't communicated with Tavares about his future.

"No, I have not reached out to John to tell him how great the golf is here. But obviously, I can relate to the position that he's in," said Stamkos. "I think he's handling it very well. Look at his play in the last week or two, as he's stepped up to carry that team. It's not the easiest position to be in, when you're being asked questions every day about it."

Stamkos went through this exact experience in 2015-16, while in the last year of his contract. There was heavy speculation that he would return to his native Ontario to play for the Toronto Maple Leafs. There was even some talk that he might join Tavares with the Islanders.

In the end, he never went to market, and signed an eight-year extension with the Lightning.

"It's fun to think of that stuff for sure, and from a media and fans standpoint," said Stamkos.

Could Tavares to the Lightning happen? Potentially, although GM Steve Yzerman would have to clear some cap space and Tavares would have to sign a cap-friendly deal. His future with the Islanders is reportedly tied to the team getting a new arena at New York's Belmont Park, a decision that could arrive in early 2018.