State of the Devils: After adding Subban and Hughes, can NJ win now? 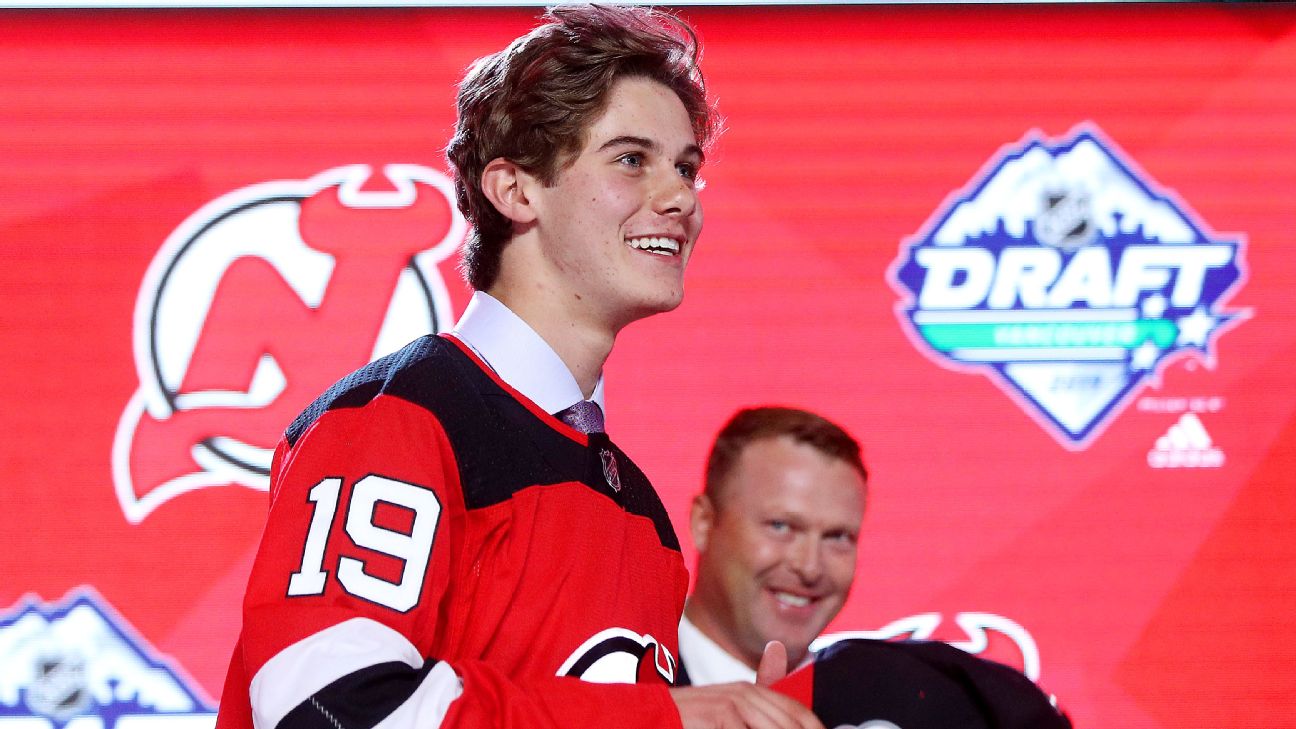 VANCOUVER -- For an NHL player with carefully cultivated fashion sense, P.K. Subban was unprepared for his trade to the New Jersey Devils.

"I got no merch. I got no memorabilia with New Jersey Devils on it," he said during a reaction video posted on social media, picking up a red and black water bottle as the next best thing.

The Devils, meanwhile, were prepared. Team president Hugh Weber told the ESPN On Ice podcast that the Devils called in extra help in their ticket department on Saturday morning in anticipation of the trade and to take advantage of the buzz after the team drafted American center Jack Hughes first overall in the NHL draft on Friday.

The Subban trade was the weekend's most stunning transaction, as the Nashville Predators traded the former Norris Trophy winner for defenseman Steven Santini, prospect Jeremy Davies and a second-round pick in 2019 and 2020. The 2019 second-rounder was subsequently flipped to the Flyers in exchange for picks No. 45 (Egor Afanasyev) and No. 65 (Alexander Campbell).

The reason the Predators traded Subban was also the reason the Devils landed him: His $9 million cap hit through 2022. There were four teams in the derby for Subban, and the Devils were the only one willing to absorb the entire contract.

"That was a big factor," Nashville GM David Poile said, thus the 30-year-old defenseman was headed to New Jersey.

"Are you guys ready for the Subbanator? Because I'm ready to go!" Subban exclaimed in his video message:

Better question: Are the Devils ready for what Subban and Hughes can give them?

The Devils averaged 2.67 goals per game last season, 25th in the NHL. Their power play was at 17.7%, which was 21st. In 2017-18, when the Devils made the playoffs, they were 15th and 10th in those categories. This is the difference between having Taylor Hall for a Hart Trophy season vs. having him for 33 games.

The reality for the Devils is they had two legitimate goal-scoring threats on the roster: Hall, who had 11 in those 33 games, and Kyle Palmieri, who ended up with 27 goals on the season. That they played on the same line, with Nico Hischier (47 points) in the middle, made the Devils a rather top-heavy team.

Enter Hughes, who is going to be asked to anchor his own line immediately. It'll be interesting to see who surrounds him on that line. In theory, the best move would be to slide Palmieri on his wing; Hughes is a rare talent when it comes to his playmaking ability at full velocity. Given that making the leap to the NHL as a 200-foot player is most difficult for young centers, perhaps the Devils will add another established player to his line to, say, handle some draws. Pavel Zacha comes to mind.

If Palmieri does come off the Hall line, 20-year-old Jesper Bratt would seem like a natural fit with Hischier, and he played with him before.

The Devils have some quality grunts down the lineup in Blake Coleman (22 goals), Miles Wood (an agitator), John Hayden (just picked up from Chicago) and elder statesman Travis Zajac, a 33-year-old center whose 19 goals were his most since 2010. The X factor is Jesper Boqvist. The smooth-skating 20-year-old left wing is making the leap from Sweden this season. Where he ultimately slots in will likely be determined by how quickly he adjusts to the North American game.

Devils GM Ray Shero is quite high on him. "Every team I get into [discussions] on a trade, they ask for Boqvist. So that tells me we shouldn't trade Boqvist," he said.

As for Subban, he plays right defense, so the Devils have a few options for a partner: Veterans Sami Vatanen and Andy Greene both play the left side, as does third-year player Will Butcher. Greene and Damon Severson saw the most ice time together last season, playing to a minus-11 in 5-on-5 goal differential. Butcher lost his D partner in Ben Lovejoy at the trade deadline. As with Boqvist at forward, the Devils have a rookie X factor on defense in Ty Smith, the 19-year-old 2018 first-round pick who played in the Western Hockey League last season. There has been speculation that he could partner up with Subban.

Subban and Hughes could have the biggest impact on the power play. Subban is one season removed from having 25 points on the man advantage; Butcher was the highest-scoring Devils defenseman on the power play last season, at 16 points. Hughes could slide into the "bumper" position for the power play, which has a 1-3-1 formation; essentially it's a puck-moving position designed to prevent opposing penalty kills from getting too aggressive on the perimeter.

The most pressing need is a veteran goal-scoring winger who could play with Hughes, allowing the Hall line to remain intact -- if it's not broken, no need to fix it. There are a few interesting options on the unrestricted free-agent market, such as Gustav Nyquist of the Sharks, Anders Lee of the Islanders and former Ranger Mats Zuccarello, if he doesn't re-up with Dallas.

But Shero doesn't typically dabble in bloated UFA contracts with extended terms. Instead, if the Devils are to add scoring depth, it'll likely be with a move akin to the Subban one: Using the cap space to acquire other teams' cap casualties. To that end, a team such as the Vegas Golden Knights would be worth watching.

The Devils have $25.77 million in cap space after the Subban trade, but they have just 15 players under contract. They need to hand new deals to restricted free agents Butcher, Zacha, Stefan Noesen, Mirco Mueller and Connor Carrick, and they need to fill some blanks up front.

It's the following season where things get interesting, as Hischier and Bratt both need their second contracts, and the Devils will need a new one for that Taylor Hall fellow. That's why the Devils are trying to strike while the cap space is large this season.

"There's a certain window to do things," Shero said.

Hall made headlines when he said he was taking a wait-and-see approach with the Devils after last season. Shero had no problem with that.

"It'll play itself out. There's certainly no drama on our end, except when people try to make it. He has one year left on his contract, and I hope to get to it much sooner than that. Let's play it out through the draft. Go through free agency. See where we go," he said during the NHL Awards.

Everything you need to know about Hall's value to the Devils can be gleaned from the fact that they ran the Subban trade by him the day before it was completed. He signed off on it and said the two were friendly with each other.

Winning the Jack Hughes Derby opened the door for Hall to stay with the Devils. Adding Subban kicked it open a bit more. But while the Devils could have an eight-year deal worth huge dollars ready for Hall, it all comes down to one thing for the former MVP as he turns 28 this November: He wants to win. Whether the Devils have shown him that they have a path to that end will determine his next course.

Will Subban have a marketing impact on the Devils' franchise?

"I hope so," said Shero, laughing at the obviousness of the question. "He might be the most marketable player in the league. We've never had that in New Jersey. The Devils were under the radar for a while."

"I worked with Lou for a long time," Devils president Hugh Weber said. "It was a philosophy, and they had success."

But this is a different age for NHL players. Look no further than Subban, a ubiquitous presence on Twitter and Instagram, in a high-profile relationship with Olympian Lindsay Vonn.

"With 1.1 million Twitter followers, he might have more followers than half the teams in the league," Weber said.

"He's exciting, impactful, helpful to the team. He's great for the community. He engages, and it's heartfelt. And he candidly cares about growing hockey. You think about those three things coming to New Jersey -- that's exactly what we need."

Subban also gives the Devils something they haven't had since relocating from East Rutherford to Newark in 2007: a star player who is black in a city that's 49% black or African-American, according to population stats from 2017.

"Newark is a city on the rise. Eleven years ago, when the Prudential Center was built, it was done so as a catalyst to potentially help that community rebound," said Weber, who has been with the team for six years. "When the arena was being built, the community around it saw it as, like, a castle on the hill. They didn't go to games. They had friends who worked at the building, but they didn't really engage. We made a concerted effort in the last four or five years to engage in that community." 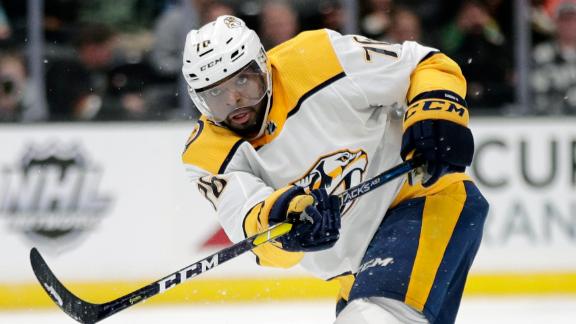