TAMPA, Fla. -- Newly minted Alabamaoffensive coordinator Steve Sarkisian said, "I'm doing great, thanks for asking," when asked specifically on Saturday at the College Football Playoff media day how he is dealing with his substance abuse issues.

It was Sarkisian's first media appearance since stepping away from college football for about 11 months to go through rehabilitation for substance abuse problems.

Sarkisian, who will call plays in Monday's championship game for the first time in about two years, after abruptly taking over for new FAU coach and former coordinator Lane Kiffin earlier this week, faced a throng of reporters and answered every question calmly -- saying he has been exhaustive in his preparations for facing a stingy Clemson defense.

Sarkisian said turning his personal life around has been "a process," but he didn't want to dwell on it and take the focus off of the team.

"More than anything, it really gave me a point of reference that I love coaching football," he said of his time away. "I love being around these players, these coaches. I love the preparations; I love the schematics, the emotions of the game. To have this opportunity again, I'm very grateful now."

Sarkisian has worked on the weekly game plan since being hired as an offensive analyst at Alabama four months ago. He couldn't coach at practices but said when coach Nick Saban made the decision on the Monday after the Chick-fil-A Peach Bowl to move him to coordinator, it was a "natural transition."

"It's not just so foreign where I'm coming in from the outside and trying to pick up where they left off," Sarkisian said. "I've been around this thing. When you start calling plays, you start calling plays. You don't get caught up in everything that's going on outside. You focus on what's going on between the lines, and that's the mindset I have."

The difference, though, is that it will be the first time in years that the former USCand Washingtonhead coach is the one calling the plays in the clutch. He said he's not nervous -- he's excited.

"I haven't made those final decisions you make as a coordinator," he said. "What, ultimately, are you going to run in those third-and-short situations? What are you going to call when you're on the goal line? What's that first call? You make suggestions when you're in my situation throughout the week, but when you're calling those plays, you've got to make those calls."

Sarkisian said he will be on the field for the title game instead of in the press box.

"That's where I'm comfortable," he said. "I've always called plays from the field. I'm comfortable there. I think it's important for me to have the one-on-one contact with [quarterback] Jalen [Hurts] on the field and seeing his demeanor and really talking through things. I always appreciated that as a player."

Sarkisian said he is very "grateful and humbled and honored" that Saban trusted him to do the job.

When asked whether he had any rust, Sarkisian smiled and said, "We'll find out Monday." 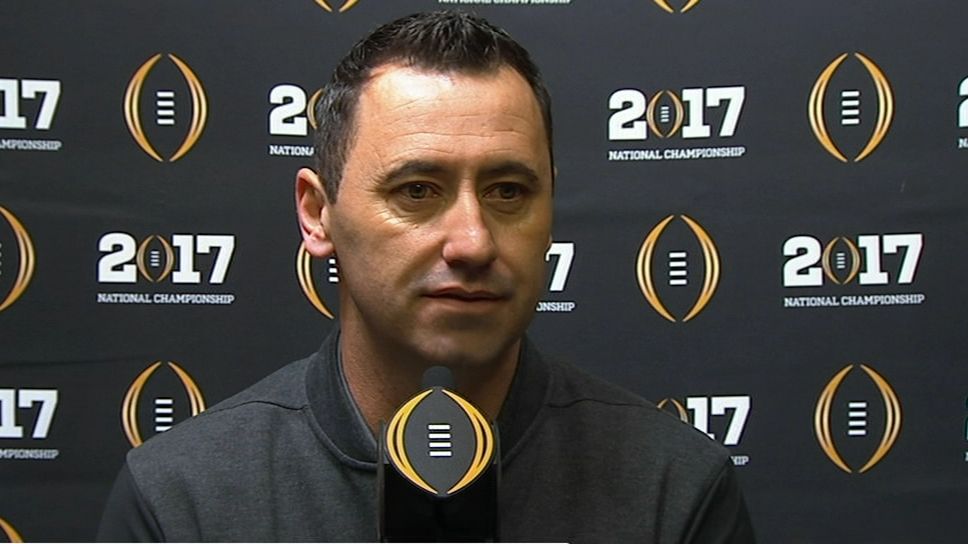