Sun Belt commish: 'Consensus' is that games must be shortened 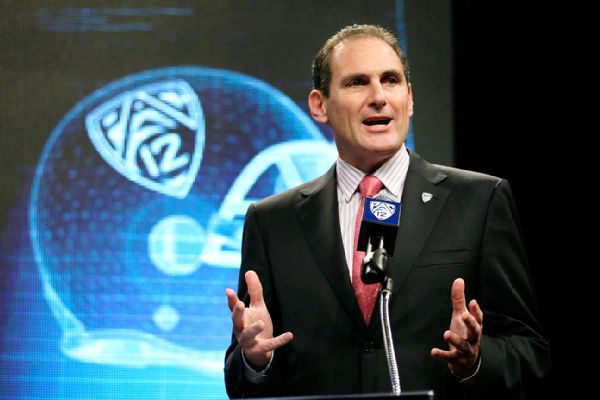 TAMPA, Fla. -- Perhaps it was fitting that the first college football game of 2016, between Cal and Hawaii, lasted almost four hours.

It was a harbinger of the coming season, in which the average game time was the longest in college football history at 3 hours, 24 minutes. That was much too long for a number of people.

"I would like to see shorter games," Pac-12 commissioner Larry Scott said.

Scott is not alone. He is among a number of conference commissioners and head coaches who told ESPN they believe games have become too long.

The biggest challenge, however, is determining how to shorten the games.

"Fundamentally, we have to have that conversation," SEC commissioner Greg Sankey said. "We need a bit more consistency [on length of games]. There are a lot of ideas that merit discussion, such as [shortening] halftime, but I think we should be careful with that."

The NCAA's Football Oversight Committee is expected to discuss game length, among other matters, in a couple of weeks.

"We need to try to look ahead," Scott said. "We shouldn't wait until there's a problem."

Ole Miss games averaged 3:32 and 150.1 plays this season, both among the highest in the SEC. USF, where Taggart coached this season, averaged 154.2 plays, with an average game time of 3:31.

"I would like to see all possible ways of shortening games before I give an opinion on how," Freeze said. "But I firmly believe we have to shorten games for the good of the game."

North Carolina coach Larry Fedora, whose Tar Heels' games were just four minutes longer than the national average of 3:24, said he doesn't believe there is a problem with game lengths. But commissioners Karl Benson of the Sun Belt and Judy MacLeod of Conference USA are among those who believe the games are too long.

"There is a consensus, if not unanimity, the games need to be shortened, but there is also a strong belief that we don't want to reduce the number of plays in a game," Benson said. "So until the majority agrees that shorter games will require fewer plays, we will be at a standstill."

Big 12 commissioner Bob Bowlsby, whose conference's teams had the longest average game time of 3:36, admitted some games are too long.

"Staying under 3:25 is an appropriate aspiration," Bowlsby said.

One Power 5 coach, who wished to remain anonymous, had the most radical suggestion of all. "Shorten the quarters from 15 minutes to 12 minutes," he said.

MAC commissioner Jon Steinbrecher, who is a member of the Football Oversight Committee, is among those who believe there is a need to take a closer look at the length of games. He said he would prefer games closer to 3:15 than 3:30.

Steinbrecher stressed that if any changes are made, "Coaches need to be front and center on this. We need a good look at this from 360 degrees."

In the past 10 years, game times have increased 20 minutes per game, in part because teams are averaging 15 more plays per game than in 2006.

"You don't want to cut halftimes because of the difference between our games and the NFL," he said, citing the marching bands in college as one difference. "It's hard to envision [reducing] commercial times, so we have to figure out ways to make games a little shorter."

Mountain West deputy commissioner Bret Gilliland, another member of the Football Oversight Committee, said he doesn't have a problem with game lengths.

"But there probably would be merit taking a holistic look to see if some tweaks are possible, which might make the games more efficient," Gilliland said. "The college game is unique, though, and has elements we don't necessarily want to eliminate to fit a particular time window, such as three hours."

"If they mess with that, they are idiots," said Leach, whose Cougars were tied for the fourth-longest game average among Pac-12 teams at 3:30. "They should have fewer commercial breaks. If they don't want to cut the number of commercials, then fit them into less [game] breaks."

One conference even keeps track of which networks are quickest to return to play after a commercial.

Mountain West commissioner Craig Thompson said he had not received any complaints about length of games.