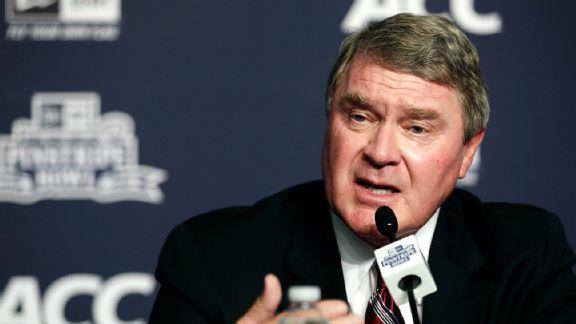 GREENSBORO, N.C. -- ACC commissioner John Swofford is confident a proposal granting the Power Five conferences more autonomy will pass when it comes up for a vote next month.

Last week, the NCAA announced its board of directors will decide on Aug. 7 whether to accept the proposal, aimed at allowing the larger conferences the ability to make decisions that benefit their athletes and institutions. Athletic directors and athletes would have more say in governance as well, two key factors in the proposed changes the ACC has supported.

Speaking at the start of ACC media days Sunday, Swofford admitted the proposal is not perfect, but it does more than enough to get much-needed changes implemented.

"I would guess there is nobody who will get everything they want at the end of the day ... but the primary things I think are moving along very, very, very well, and I'll be surprised if it doesn't pass," Swofford said. "There's always compromise in these kinds of discussions, and the autonomy was the most important aspect of it. Autonomy just opens up a lot of opportunities for the five conferences to do some things that we feel are important, and most of those things are initially related to the student-athletes' situation."

Indeed, Swofford said first on the agenda would be the full cost of attendance, echoing comments SEC commissioner Mike Slive made last week. Swofford admitted there are various ways to enhance the cost of a scholarship, and more work needs to be done to come up with a consensus everyone can agree upon.

Swofford also said the ACC would be in favor of granting four-year scholarships, and believes the other Power Five conferences would be on board with that as well.

"The autonomy gives us the opportunity to come up with something that enough of us can agree upon that it'll move forward for the five conferences, but there will be some interesting discussions," Swofford said. "We'll need to immediately begin developing a process for the five conferences and how we operate together in bringing about legislation that would be permissive for the five as well as permissive beyond the five for those who would want to take part in it.

"There's going to be a lot of work to be done if this passes, in order to start the ball rolling and determine how we are going to function."

The steering committee, tasked with deciding on the best way to restructure, will give the Power Five leagues until Oct. 1 to put together their first proposals. They could possibly be adopted as early as the 2015 NCAA convention in January.

Given the urgency for change, there has been speculation that the Power Five would split off from the NCAA if the type of autonomy they wanted was not granted. Swofford believes autonomy keeps everybody under "the big tent of the NCAA."

"The good ship status quo has sailed," Swofford said. "It's time for some changes and some significant changes, and it's going to present some challenges, but it's time for that."