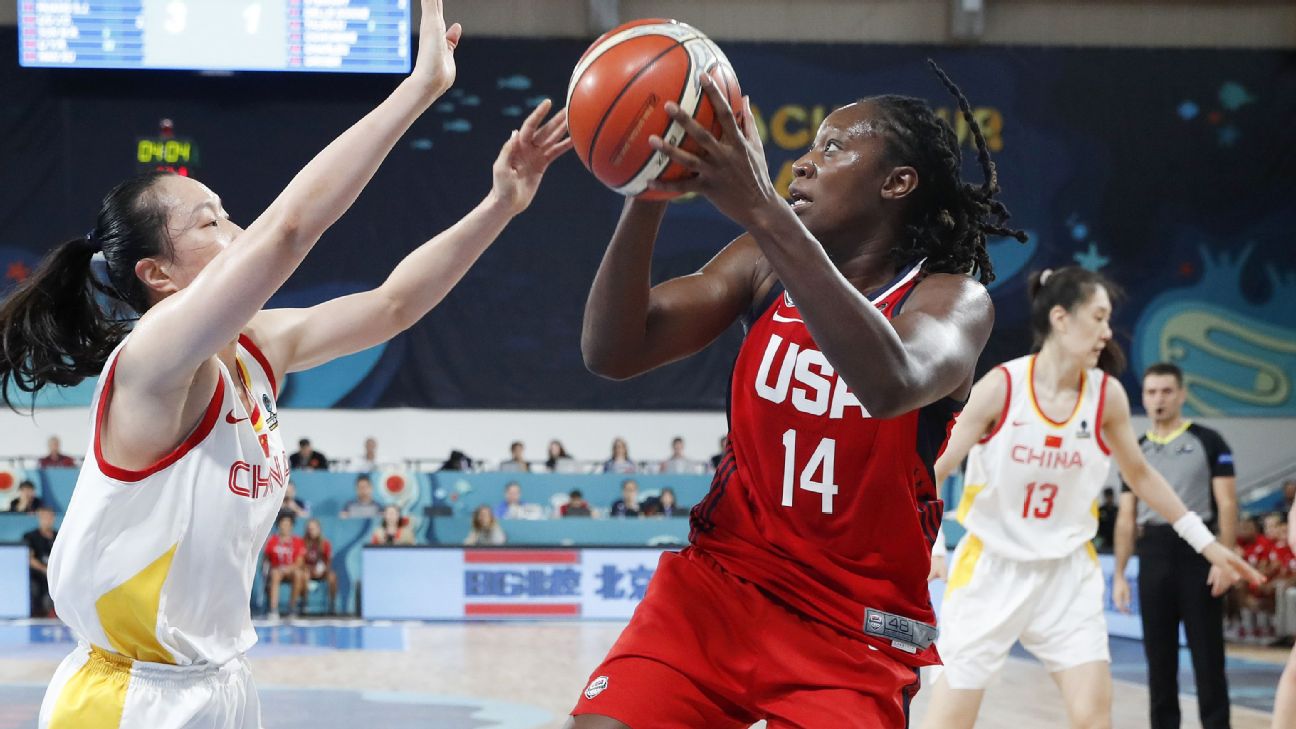 It has been a good September for the New York Liberty. And after finishing the regular season 7-27 and next-to-last in the WNBA, the Liberty and their fans needed the boost.

Coach Katie Smith was inducted this month into the Naismith Memorial Basketball Hall of Fame.

And now in the FIBA World Cup in Spain, Liberty players are taking on important roles for the United States (Tina Charles), Canada (Kia Nurse) and Australia (Rebecca Allen).

The Liberty are still up for sale, and as Smith said multiple times during the season, the players and coaches don't know what the future holds (other than they will pick second in the 2019 draft).

But on Sunday, it was easy to focus on the positive for the Liberty players competing in Tenerife. The United States moved to 2-0 in Group D with a 100-88 victory over China. Canada in Group A and Australia in Group B also are each 2-0.

A lot of people were looking forward to watching Canada in this tournament. Nurse, the former UConn star who was the No. 10 pick in the 2018 draft, was one of the contributors in a strong rookie class this WNBA season. Nurse averaged 9.1 points, second in scoring on the Liberty behind Charles' 19.7, while primarily coming off the bench; Nurse did start seven games.

Nurse went lower in the draft than some expected, but New York was a good spot for her. And it was good for the Liberty too, because Nurse brings the kind of competitive resilience they'll need as they try to climb back to prominence in the WNBA.

On Sunday, Nurse scored 29 points in the Canadians' 82-63 victory over South Korea. She was 11-of-16 from the field, including 6-of-10 from behind the 3-point line. Nurse also had four assists, three rebounds and two steals. Canada started the tournament Saturday with an 81-50 victory over Greece, and Nurse had 12 points. Next up, though, is Canada's toughest matchup of group play, France, which also is 2-0.

Allen played in 28 games for the Liberty this season, averaging 3.8 points. The Aussies are the last team other than the United States to win the World Cup. They took the gold in 2006 over Russia after the Russians had defeated the United States in the semifinals.

Australia would relish a chance to actually defeat Team USA, but for now, the Aussies are off to a strong start in their group. They opened with an 86-68 victory over Nigeria, then defeated Argentina 84-43 on Sunday. As expected, Dallas Wings center Liz Cambage has led the way, with 34 points in the opener and 24 on Sunday. Allen had nine points, five rebounds and three assists against Nigeria, and she posted five points, six rebounds and four assists against Argentina. The Aussies take on Turkey next.

Charles has been the rock for the Liberty since arriving in New York via trade from Connecticut for the 2014 season. She has been one of the most consistent players in the WNBA since being drafted No. 1 by the Sun in 2010, averaging 18.3 points and 9.7 rebounds in her career.

Charles doesn't have to be that kind of offensive weapon for Team USA, of course, but she can be when needed. And one thing the Americans consistently need from her -- and consistently get -- is defense and rebounding.

In Saturday's 87-67 opening victory against Senegal, Charles had six points and six boards. On Sunday, the U.S. had to keep its foot on the gas pretty much the whole way to beat China, and defense was a concern. But that should improve as the tournament goes on, and Charles is one of the players who can lead the way.

She had 16 points on Sunday -- 10 in the first quarter -- as she went 7-of-12 from the field, and she grabbed six rebounds. With center Brittney Griner still out after an ankle injury, the 6-foot-4 Charles was one of the very experienced defenders against China's size. That helped fellow post players such as WNBA Rookie of the Year A'ja Wilson in dealing with the 6-foot-9 Xu Han and 6-foot-6 Mengran Sun, who combined for 36 points and 11 rebounds.

Monday is an off day for games, and then everyone is back in action on Tuesday, as the Americans take on Latvia (ESPN+, 1 p.m. ET). One can expect Team USA to focus on defense in their off-day practice.