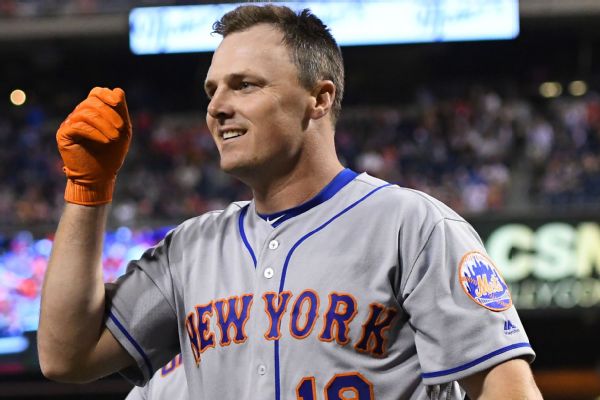 "It gives you a little bounce in your step," Francona said Thursday before the Indians opened a four-game series against Tampa Bay. "There's no guarantees. There's not supposed to be, but he is a really good run producer, and to add him to your lineup is really going to help."

Bruce wasn't at Tropicana Field in time to start versus the Rays. The American League Central leaders acquired the 30-year-old Bruce from the New York Mets on Wednesday night for minor league pitcher Ryder Ryan.

Bruce hit 29 home runs, tied for fourth most in the National League, and drove in 75 runs for the Mets, playing the outfield and occasionally at first base. Francona said he wants to talk with the left-handed power hitter before making any long-term decisions, but he said Bruce probably will bat fifth on Friday night.

Outfielders Lonnie Chisenhall and Michael Brantley are on the disabled list, although Francona hopes to get Chisenhall back by next week.

"If it comes to the point where we have too many outfielders, good for us, because right now, we're playing two short," Francona said. "So to get a bat like this ... I mean, something else could happen. So we've got a stretch of 22 games in a row, so to have that bat should help us."

Edwin Encarnacion is the Indians' home run leader with 22. The Indians have 131 home runs and rank 10th in the league, the same position they finished last season before winning the pennant. The 2016 Indians were second in the league in runs, however, compared to seventh this year.

Francona said he hopes owner Paul Dolan gets the proper credit for acquiring Bruce, whose contract expires at the end of this season.