Texans GM: We know who we want 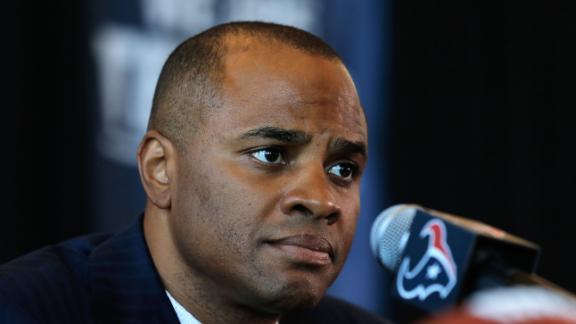 HOUSTON -- Texans general manager Rick Smith said he knows which player he would take with the first overall pick next week -- he just isn't sure Houston will be picking there.

Smith declined to name teams he'd spoken with, nor did he characterize the progress of such discussions.

"I know the order of our board. If we select first, it's a unique opportunity to be the first pick," he said. "If we do select there, I know who we feel good about there. If we move, then obviously there are variables that come into play at that point."

ESPN's Todd McShay and Mel Kiper both have the Texans selecting South Carolina defensive end Jadeveon Clowney with the first pick in their latest mock drafts.

The Texans first suggested their interest in trading the top pick in the draft in January after hiring Bill O'Brien as coach.

Both O'Brien and Smith have said previously they don't see a big separation in quality between several of the quarterbacks in this year's draft. The Texans need a quarterback and have said they will select one somewhere in the draft. Texas A&M's Johnny Manziel previously has been mentioned as a possibility there.

"There's value throughout the draft," Smith said. "Each round has good players."

Despite beginning the 2013 season with Super Bowl aspirations, Houston finished last in the league with a 2-14 record. Gary Kubiak was fired as coach in December, but Smith maintained owner Bob McNair's confidence and kept his job.

This is the third time in franchise history the Texans have had the first overall pick and the first time Smith has presided over one. In 2006, after selecting Mario Williams first overall, Charley Casserly stepped down as general manager. The Texans already had hired a new coach for that season -- Kubiak.

"It's a unique situation and it's very painful to get here," Smith said. "But now that we have lived it for a while and prepared this way, it's a very, very advantageous place to be."

Texans GM: We Know Who We Want
ESPN.com Texans reporter Tania Ganguli breaks down the Texans GM Rick Smith's statement that he knows which player he would take with the first overall pick next week if the team doesn't trade the pick.