The education of Clint Frazier 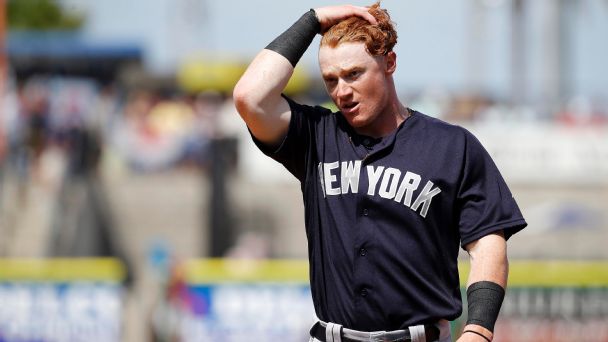 MOOSIC, Pa. -- The lyrics, from The Chainsmokers' song "Don't Let Me Down," blare from the speakers at PNC Field, home of the New York Yankees' Triple-A affiliate, the Scranton/Wilkes-Barre RailRiders. Clint Frazier says he chose his walk-up music simply because he likes it, but the words speak volumes.

It's in my head, darling I hope

That you'll be here, when I need you the most

Frazier's talent is there, but what's beneath his already-famous red locks could decide whether he lets himself down.

The 22-year-old, one of baseball's most highly rated minor leaguers, always sticks out -- even when he doesn't want to. He strides to the plate with confidence, sporting distinctive red batting gloves that match the hint of his favorite color in the lettering of the RailRiders' navy blue jersey. He's the No. 27 prospect in all of baseball, according to ESPN's Keith Law, but Frazier might be No. 1 if there were a sixth tool considered: his ability to grab the center of attention. It puts extra weight on his shoulders.

These days, at Triple-A Scranton, Frazier toils two hours from the Bronx, working every day until when -- not if, in his mind -- he'll be a major leaguer. Frazier has a certain kinetic energy about him, but he's doing his best not to rush. If he can master his emotions, he might be in the big leagues sooner than later

"I think he is getting pretty close," said Yankees manager Joe Girardi, who watches most of Frazier's Triple-A at-bats and is noticing that the game is slowing down for the right-handed hitter.

IT IS SOMEWHAT hard to believe that just four months ago, the 6-foot-1, 190-pound Frazier was a bigger story than Aaron Judge -- who now leads the voting for the American League All-Star team -- and was considered by many to be a better prospect than the 6-7, 282-pound wunderkind.

This spring, Frazier's mane, which flirted with the old George Steinbrenner rules about Yankees hair length, made headlines.

"My hair was bigger than my game in the media," said Frazier in the RailRiders' clubhouse earlier this month.

He knew he was toying with team rules. Frazier, whose hair has always been the longest among his friends, didn't want to give in to tradition.

Finally, the melodrama, which landed Frazier on the front page of the New York Times and the back pages of the New York tabloids, ended when Girardi told him it was time for a trim. His hairdo had become a distraction, both to the team and the player, in the manager's mind, so it had to go -- though, Girardi stresses, he didn't want Frazier to snip his personality in the process.

It's not as if the Yankees haven't had players with pizazz, dating back to an outfielder named George Herman Ruth. Guys like Reggie Jackson and Alex Rodriguez have followed the Babe's tradition with outsize personalities, matched by outsize talent. Frazier has never had a major league at-bat.

When asked for an updated appraisal -- with the trade deadline just a month away -- Cashman applauded Frazier's output this year. He's batting .250 with 12 homers and 41 RBIs in 70 games. His OPS is .813. If the Yankees need to call up an outfielder to play every day, it would be either Frazier or Dustin Fowler, Cashman said.

The GM's actions, more than his words, will show how he truly feels. When Jesus Montero's catching ability was knocked by scouts, Cashman insisted he could be a major league catcher. Then one January day in 2012, the Yankees shipped Montero to Seattle for starter Michael Pineda. So if the Yankees can acquire a talented starter again next month, will they sacrifice Frazier?

So far, there's been plenty of potential for success on the field, and a lot of silliness off it. While the Yankees try to figure out exactly what they have, Frazier is trying to discover exactly who he is. And his expectations are high.

"My goal is for a dad to look at me and tell his son, 'That's what I want you to be one day,'" said Frazier, who turns 23 in September.

That is where the internal struggle and pressure mounts. Frazier wants to be special, on and off the field -- and he understands the impact of being a Yankee.

"It is like you have a cape on your back whenever you say you are part of the Yankees," Frazier said. "Whatever [charitable] organization touches my heart the most, I want to contribute with [as a major leaguer]. I thought a lot about how I want to be perceived."

THERE IS A bit of A-Rod in Frazier. Rodriguez had layers -- historic talent, work ethic and vanity -- which led him to court the silliest of controversies. Frazier might not reach No. 13's heights on the field, but off it, he has started his less than 1-year-old Yankees career with a bang.

A week after the Miller trade, in early August, Frazier, as 20-something kids are wont to do, hit up social media personality Jen Selter on Instagram for a date, and it created some buzz on the Internet. In the spring, his hair made news until he ended up in the principal's office, with Girardi strongly suggesting that he not only trim a little from the side, but shave it all off.

During the season, Frazier was attached to a radio report that claimed he asked the club if the Yankees would ever give out Mickey Mantle's retired No. 7. Frazier wears No. 5, and his go-to number is 19, which he wore in high school. The reporter, Yankees radio analyst Suzyn Waldman, later apologized to Frazier.

But the question wasn't whether it was true or not, but could it be? Like A-Rod and the legend of his centaur painting, the believability of the story said a lot. Could A-Rod have had a picture of himself painted as centaur? Yeah, A-Rod could. Considering Frazier's perceived bravado, could Frazier have asked for a Yankees number to be unretired? Yeah, it's possible.

Meanwhile, Frazier's unwavering belief in his own talent can rub some people the wrong way. Until you make it, of course. Then they'll say that's why you made it.

"I'm not going to shy away from letting people know I'm confident in my ability," Frazier said.

MATT HOLLIDAY, THE Yankees' 37-year-old DH, made a big impact on Frazier during a series of spring training lunch conversations. Holliday's advice was simple and focused, counseling Frazier to focus on his game, limit his social media time and keep his inner circle tight.

"He is a dynamic personality," Holliday said. "There is a lot of appeal with the fans with the hair and the big personality and the ability, but [it's about] getting down to focusing on the things that matter, and matter the most -- honing in his skills and taking advantage of opportunities."

Frazier seems to have had stardom on his mind forever, even though it was just four years ago that Cleveland made him the fifth player picked in the draft. In his mind, that left him with one choice -- going straight from high school ball in Georgia to the pros.

"Zero part of me was going to school," said Frazier, who was given a $3.5 million signing bonus out of Loganville, Georgia. "The blunt way to put it was the money was too significant to turn it down. I had the goal to play professional baseball. I think the opportunity I was handed was too good to risk going to school."

He's now receiving his Yankees education. Despite his perceived cockiness, Frazier is introspective, freely admitting he wasn't ready for the added focus of pinstripes.

"In no way was I prepared for the attention after the trade," Frazier said.

Frazier was dealt to the Yankees at the age of a college junior, a fact sometimes lost when media and fans evaluate young players. While he is trying to fine-tune his game to one day excel at the major league level, he's still becoming an adult.

"I don't think you can be prepared for the attention you are going to get when you are a New York Yankee," Girardi said.

ACCORDING TO RAILRIDERS manager Al Pedrique, Frazier looked a bit overwhelmed when he arrived at Triple-A last July. He hit just .228 in 25 games.

"He put a lot of pressure on himself," Pedrique said.

Frazier conceded he was trying to live up to being dealt for a difference-maker like Miller.

"I paid the consequences for trying to do too much," Frazier said.

Before this season, he entered his first Yankees camp trying to learn from his experience. He felt devoured by the media.

"I think it was just surprising because I think I handled it the right way," Frazier said. "I didn't try and create a headline. People were doing that for me. Like I said, it was surprising because I knew the media was capable of a lot of things, but I hadn't really experienced it until spring training came about.

"I thought I was well-rounded before, but I learned. I'm trying to become more than just a baseball player. In a lot of ways, I've learned a lot of lessons."

Frazier and Pedrique agree he is more relaxed, more himself and better prepared. Frazier is very young to be playing at such a high level. He's tried to keep his circle tighter, as Holliday suggested. Frazier says he spends most of his off-the-field time with his girlfriend, Faith Jewkes. He's determined to figure out what's in his head and not let anyone down.