The legend behind those goofy Nets cue cards 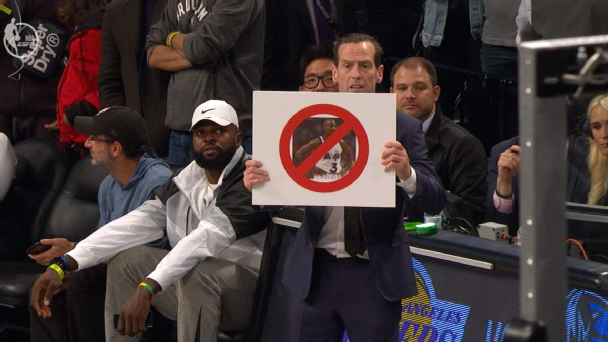 NEW YORK -- The fate of Friday night's game between the Houston Rockets and Brooklyn Nets was all but decided when coach Kenny Atkinson whipped up a large cue card and held it above his head with two hands. The commentators on the broadcast took notice of the sign, ball boys in the hallways after the games chatted about it. What the heck was that sign?

"It's just a defensive coverage we have," Atkinson said. "We've had trouble communicating it to guys in the past. So, we came up with this idea where everybody knows. Sometimes, if you have a little humor in things, it sinks in with the guys."

The thick paper Atkinson waved around while James Harden dribbled up the court late in the fourth quarter had a photo of Dennis Scott printed on it. Scott spent 10 years in the NBA and led the league in 3-pointers made in the 1995-96 season while playing for the Orlando Magic. On Atkinson's poster, which was made by the video coordinators, Scott's image had a slash through it.

The message: guard the 3-point line.

While adjusting his suspenders in front of his locker after the game, Brooklyn center DeAndre Jordan recalled the sign's genesis.

"He told us this crazy story about how it was created," Jordan told ESPN of Atkinson.

After the team returned from China, a stone-faced Atkinson had gathered the team ahead of a film session. At the time, Jordan thought the team was in for a stern talking to about its poor defensive performance. It seemed as though Atkinson had something serious to say. The fable Atkinson told the team, Jordan said, went something like this:

There was an ancient emblem that was welded by assistant coach Jacque Vaughn -- whom the team calls "JV." Vaughn had labored over making sure each line was correct and every marking was in the correct place. Sparks were flying. Blood was shed. Tears were wept. Sweat dripped from Vaughn's forehead as he created the plaque.

"At first, when he told us about this thing I was like, 'Damn, what's going on?'" Jordan said, laughing. "Then he showed us the sign, and I was like, 'Come on, bro.' I don't even know if JV had anything to do with the sign at all."

The story was a joke, but the need for the card was real. Entering Friday's game, Brooklyn's 3-point defense was among the worst in the league. Brooklyn was tied for fifth worst in the league in uncontested 3-pointers allowed per game at 8.4, according to Second Spectrum tracking, and they allowed opponents to shoot 43.3% from beyond the arc through the first four games.

Leagues rules prohibit the use of electronic communication on the bench, but there isn't an explicit rule against holding up signs. If an opposing team finds the signs distracting, though, they could have grounds to file a complaint.

"Uh oh," Atkinson said with a sly grin. "I might be in trouble. I know football does stuff like that."

The sign has now morphed into an inside joke for the team. Sure, it prods the Nets to get out and guard the 3-point line, but it also reminds them that this is a game and not to take it too seriously.

"It is probably more helpful than just telling us because you hear it and then see it, too," Caris LeVert said. "I am a visual learner."

The sign had its desired effect. Harden's 3-point attempt clanked off the front rim and the Nets' sealed their second win of the season. 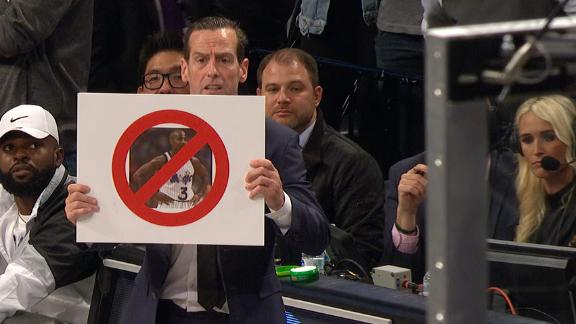 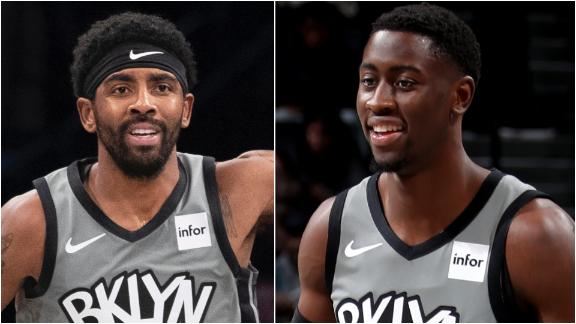