The Wysh List: Unexpected MVPs of the 2019 Stanley Cup playoffs 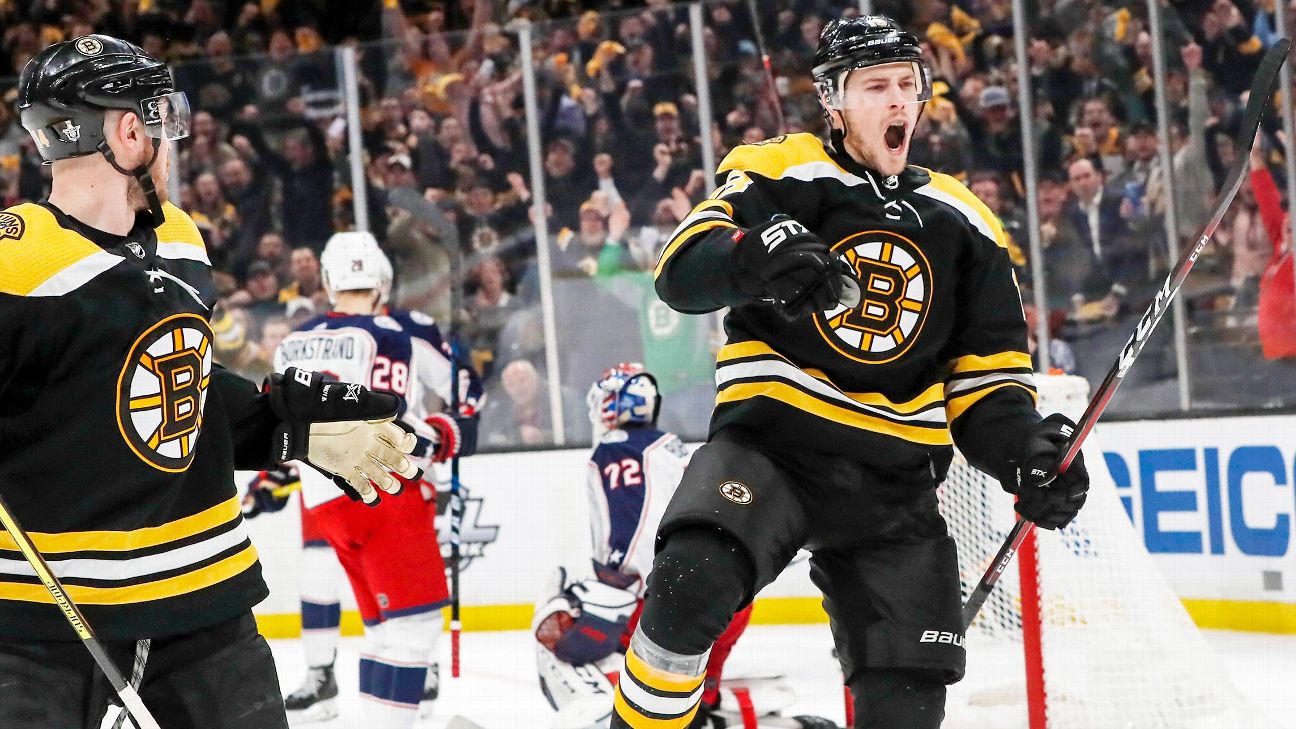 Every time I think about the spring of 1990, I think about seeing "Back to the Future Part III," with that weird steampunk cowboy flex, and watching John Druce.

If you aren't familiar with the name John Druce, it's because he was a supporting cast forward with four different teams from 1988 to 1998. He scored over 22 goals only once. He played over 80 games only once. But in the spring of 1990 playing for the Washington Capitals, he was a playoff superstar. Druce scored 14 goals in 15 playoff games as part of a 17-point performance in that span. He led the NHL in postseason power-play goals (eight) and game-winning goals (four). The 23-year-old was a sensation, at one point scoring 10 goals in the span of seven games.

And then the Capitals were swept by Boston in the Eastern Conference finals.

The point is that postseason heroism can come from unexpected sources. Here are ones from each Round 2 team:

A short plea about the playoff field | Puck Headlines

Charlie Coyle, C, Boston Bruins: In case you haven't heard, Charlie Coyle is from Weymouth, Massachusetts, about 16 miles outside of Boston. He was acquired by the Bruins around the trade deadline for Ryan Donato, who is also from Boston. Coyle -- who grew up in Weymouth, if not previously stated -- had a rough transition from the Wild, recording just six goals and three assists in 34 games. Perhaps this Massachusetts native was saving his best for the postseason, as Coyle leads the Bruins with five goals in eight games, along with an assist. The Boston University product scored a goal in Game 7 against the Maple Leafs, and then two goals in the Bruins' Game 1 win over the Blue Jackets, including the game-winner in overtime, saying after the game that he used to dream about this moment while playing street hockey in a cul-de-sac in a city colloquially known to some as "Suburban Southie." Did we mention he grew up a Bruins fan? Not bad for a kid from Weymouth. Did you know he was from Weymouth?

Warren Foegele, LW, Carolina Hurricanes: It's questionable to list an injurious act that takes out another team's player among the valuable contributions of a player in the postseason -- although, frankly, it's something Washington Capitals fans are uniquely acquainted with thanks to Tom Wilson. But aside from the unfortunate play that broke T.J. Oshie's collarbone and removed a key forward from the series, Foegele has been a heck of a catalyst: four goals and two assists in seven games, five of those points coming in Raleigh. He's been solid defensively too, with an expected goals against of 2.07 thus far.

Cale Makar, D, Colorado Avalanche: Going from the NCAA Frozen Four to the Stanley Cup Playoffs is like playing your first game of Pac-Man on level 200. And yet Makar made the leap and gave the Avalanche a puck-moving defenseman, a power-play point man and someone who has collected 61.45 percent of the on-ice shot attempts in three games.

Oliver Bjorkstrand, RW, Columbus Blue Jackets: The 24-year-old forward has been a microcosm of the Blue Jackets' postseason awakening. Coming into the playoffs, he had four points in 11 playoff games. This time, he was given more responsibility and more trust. He matched that four-point total in the span of four games, and both of his goals ended up being game-winners.

Roope Hintz, LW, Dallas Stars: Once he stopped ping-ponging back and forth from the AHL, the rookie forward had 17 points in 32 games down the stretch and has already added two goals and two assists in the postseason. He brings size and speed, and has untapped offensive skill. Plus his name is Roope Hintz. He sounds like a series of books about a canine detective published in Finland.

Adam Pelech and Ryan Pulock, D, New York Islanders: The two 24-year-old defensemen had a rather daunting task as the Islanders prepared to take on the Pittsburgh Penguins: stopping Sidney Crosby. They bent but did not break against Sid in the first-round series win, losing the possession battle but limiting Sid to one assist. It was the first time in Sid's career he didn't score a goal in the playoffs. But then again, it was also the first time in Sid's career his postseason lasted only four games, thanks to the Islanders.

Martin Jones, G, San Jose Sharks: You'll notice there aren't any other goalies on the list. That's because one expects them to be among the most valuable players on any playoff team. But what if, for example, a goalie is pulled in two out of three games, all them losses? And then he wins three games in a row, including a 58-save effort on the road in a must-win Game 6 that goes to double-overtime, followed by an overtime win in Game 7? Maybe you expected the Sharks could rally. Didn't you think it would have been in spite of Martin Jones?

Oskar Sundqvist, C, St. Louis Blues: Fun fact: Oskar Sundqvist is the only current member of the Blues with a Stanley Cup ring, captured in 2016 with the Penguins. He appeared in only two games, and he hadn't been back to the playoffs since, which is a shame, because the guy earns in the postseason. He has two goals and two assists, but three of those points came in the first two games on the road in Winnipeg, including two goals in Game 2. He's second to linemate (and "expected" MVP candidate) Jaden Schwartz in relative Corsi percentage (12.38).

Some of these players are, in coaching parlance, helping to "pull the rope." A few are having Druce-esque impacts. There's a long road ahead, but these are quality co-pilots.

What's interesting about this Foul is that it could go two ways: a carefully crafted meta joke about how Nicklas Backstrom was in a playoff series against the Carolina Hurricanes, purveyors of the "Storm Surge." Or, on the other hand, this is just a dreadful misspelling.

Many among us have likely been "in one" during trips to Sin City, but our friend blew the Foul. Doesn't this technically read: "Almost-N-One 1?"

Three takeaways of the Maple Leafs losing to the Bruins

1. It's really, really hard for a coach or executive to win twice with different teams. Say what you will about the current state of the Pittsburgh Penguins, but GM Jim Rutherford can always rest easy (on his porch, with a bowl of Werther's Originals) knowing that he built a Stanley Cup winner in Carolina and then built a two-time winner in Pittsburgh. Because he was only the second guy to do it. Ditto Scotty Bowman, who won Cups with three different teams.

Now, four years into this eight-year mega-deal, we begin to see real criticism of Babcock, as the Teflon coating of his previous accomplishments wears thin and demands grow for a return on investment. That he's been out-coached in the playoffs. That his player-usage decisions -- like the inexplicable loyalty to an ineffective Patrick Marleau in key situations in the playoffs -- is daft. That he's not getting more out of his teams than one and done.

It didn't help that Babcock refused to self-critique after the season, laying blame on the roster construction. GM Kyle Dubas was smart enough to read the room and fall on his sword for pretty much everything (even, like, the penalty kill) and was the clear winner in this public relations battle.

There is an immediate heir to Babcock. Sheldon Keefe has long been Dubas' guy, and he's coaching the Toronto Marlies to great success in the NHL. And more and more Leafs fans sound curious about how he'd handle the Big Job.

So let a summer of hand-wringing over the Best Coach In Hockey being unable to turn another team into a winner begin. Hey, maybe Nicklas Lidstrom will come out of retirement so Babcock can win something of consequence again...

I thought he looked like a haute couture "guy taking his dog for a walk on a chilly morning." But I think there might be a gender divide here. My wife said she's into the look. Colleague Emily Kaplan specifically defended the choice of shoes. If nothing else, we can praise Matthews for attempting to rival NBA players in the fashion department.

3. Are we sure that -- given the upcoming financial commitments to Mitch Marner and Auston Matthews, on top of what they're paying John Tavares-- we might not look back at this roster full of entry-level contracts in five years and say, "Yeah, the window to win was widest in 2019?"

Listen To ESPN On Ice

Emily and I made our Round 2 picks and talked about the Leafs' demise with Chris Johnston of Sportsnet. We also had an awesome conversation with John Davidson, president of hockey operations with the Columbus Blue Jackets. Check it out on iTunes here.

Look at these jerks:

Look how excited they are. Unless you're a Capitals fan, you can't help but get caught up in that.

But now comes the hard part: Continuing to care about the Hurricanes. Or the Avalanche. Or the Islanders. Or the Stars. Or the Blues. And so on.

My plea is this: If you are a hockey fan who complains about the imbalance in coverage between the "same old" teams and the new blood in this league, it is your sworn duty to watch these playoffs. If you are someone who has made the same "Chicago Blackhawks outdoor game" jokes for the past decade, then you need to click on every story about these series. I speak from experience: If you want to see a larger variety of coverage in the NHL, then it's on you to let those who make those decisions understand that you're into it if, say, the draft lottery had more glamour franchises than the playoffs do this season.

I know, I know ... there's a certain modicum of selfishness here. I think all of us who cover the game -- writers, broadcasters -- are a little worried what a Carolina vs. Dallas Stanley Cup Final looks like, ratings-wise. Which means it's also on us not to prejudge. Not to let the story become what the ratings or the web traffic will look like, but to instead tell the stories that compel you to watch series that you might not otherwise make time for when the weather turns warmer. If it ends up being Boston vs. San Jose, that's a small-dunk easy Final to hype. If it's Columbus and Colorado, it's on us to make it seem vital.

So enjoy the utter unpredictability of these playoffs. Tell your casual fan friends that the games are awesome (so ... many ... overtimes). Get into it.

Kudos to the NHL for recognizing the farce that was Game 7's major penalty call between the Sharks and Knights and acting accordingly.

The Atlantic has a huge documentary project on the late Todd Ewen and his struggles with CTE.

Have any old hockey sticks you're looking to get rid of? You know who'd like to use them? Oysters.

Reimagining the Pittsburgh Penguins as The Avengers. C'mon, everyone knows Phil Kessel is Groot.

Shane Ryan on The Loop wrote a piece titled "Could hockey ever become cool again in America?" and it will make your brain hurt. "For those outsiders who don't already love the sport -- particularly for those who, like me, loved it once and lost our way -- it's hard to imagine what could reignite that flame and win us back. For the broader American sports zeitgeist, hockey looks like a sport that is doomed to recede in perpetuity." Ugh.

Tim Leiweke on Seattle's NHL team: "As great as Vegas is -- no disrespect to Vegas -- Seattle could be even greater." ($)

We published our oral history of the 70-save Dominik Hasek game earlier this week. Here's the Buffalo News take on this crazy night.

In case you missed this from your friends at ESPN