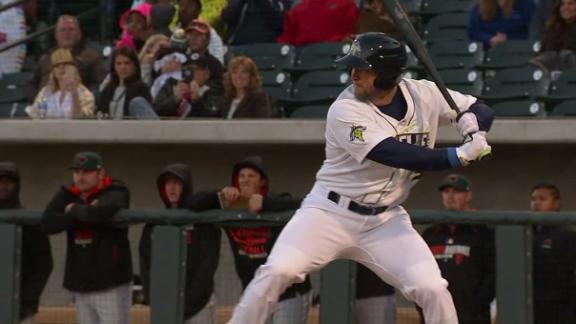 COLUMBIA, S.C. -- Tim Tebow had a lot of big moments in his storied football career, and he kicked off his minor league baseball career with another, hitting a two-run homer in his first at-bat in his debut Thursday for the Class A Columbia Fireflies.

"All of my sports experiences helped me for moments like that," Tebow, the 2007 Heisman Trophy winner, said after the Fireflies' 14-7 victory over the Augusta GreenJackets. "Playing in The Swamp or Death Valley or in Mile High Stadium in the playoffs, they all helped.

"So much about sports is handling moments and handling pressure."

Tebow, 29, handled this moment well. He drilled a 2-1 pitch off the railing in left-center field, where a strong wind had been blowing out all day.

His only mistake was that he initially thought it was a ground-rule double, because the ball ricocheted back onto the field, and stopped at second.

As soon as the umpire motioned to circle the bases, Tebow clapped his hands as if he had thrown a game-winning touchdown.

The home run came off Augusta left-hander Domenic Mazza, the No. 666 overall pick in the 2015 draft and runner-up in golf's 2010 World Long Drive Championship.

The sellout crowd at Spirit Communications Park was sent into a frenzy. But even before the homer, fans were chanting "Te-Bow! Te-Bow!'' after the former University of Florida and NFL quarterback fouled off a pitch.

The chant grew even louder as Tebow circled the bases.

Tebow later had a weak groundout to shortstop and struck out in his next three at-bats -- twice looking and then swinging in his final at-bat. He finished 1-for-5 with two RBIs.

But the home run is what most in the packed stands will remember for a player who batted .148 with eight strikeouts in 27 at-bats during spring training.

"I know so many people want to sensationalize it, but for me it's just one day," Tebow said. "One opportunity, the first of a lot of games. Tomorrow will be another opportunity to wake up and try to get better.

It was announced in August that Tebow would pursue a career in baseball after his time in the NFL fizzled. He was assigned to the New York Mets' Class A team at the end of spring training.

He always tried to envision what his first official at-bat would be like, but a home run might have exceeded those expectations.

"The big games in football have helped me for that moment, being my first at-bat in a real pro baseball game," Tebow said. "But I tried to make the most of it."