Top 31 players who could be available at the trade deadline 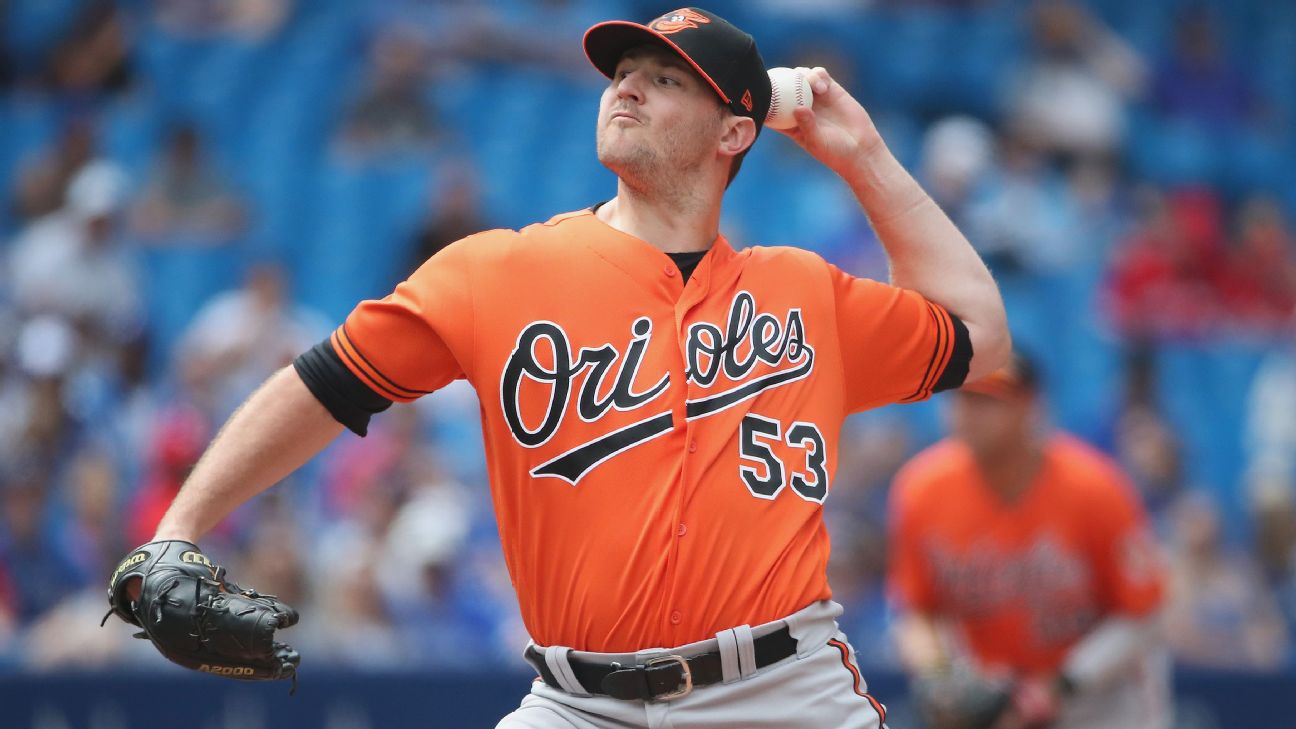 At its peak, the original "Let's Make a Deal" game show had a waiting list of two to three years for tickets. At times, it seems like we've been talking about trade rumors for two to three years instead of months, but it's finally time to unveil what's behind the curtains this year. Manny Machado and Brad Handalready have been dealt, and it's possible they end up being the most impactful trade acquisitions of the month -- Machado for adding another power bat to an already dangerous Dodgers lineup and Hand for adding a much-needed quality reliever to the Cleveland bullpen.

So, two guys down, but here are 31 others who could be traded by the July 31 deadline:

Given the weak crop of starting pitchers available, look for teams to add bullpen help instead. Also consider how teams deployed their pitchers last postseason. There were 76 playoff starts, and the starting pitcher made it through five innings in just 41 of those games (54 percent) and through six innings just 25 times (33 percent). You need deep bullpens in today's game.

1. Zach Britton, Orioles: He hasn't found the form he had when he dominated from 2014 to 2016, so the price won't be as high as the Orioles could have received even last year. Jerry Crasnick tweeted Sunday that the Cubs and Astros are trying to match prospects, with the Braves more reluctant to give up players for a rental.

2. Brad Brach, Orioles: Like Britton, Brach also will be a free agent, so the Orioles might as well get what they can for him. However, as with Britton, Brach has seen seen better days, with a 4.34 ERA that includes a 200-point increase in OPS allowed from 2016.

3. Kirby Yates, Padres: The Padres already traded two relievers, but Yates could still go. The 31-year-old right-hander has bounced around from the Rays to the Yankees to the Angels to the Padres since 2014 with a 4.78 ERA, but the gaudy numbers this season -- 1.43 ERA, 48 strikeouts and just one home run in 37 innings -- might be legit. He has thrown a splitter he developed last season about a third of the time and basically junked his slider, cutting his fly balls way down, and thus his home runs.

4. Ryan Pressly, Twins: He has been with the Twins off and on since 2013 -- pitching primarily in low-leverage roles -- but has suddenly jacked up his strikeout rate this season and ranks 15th among relievers with a 33.0 percent K rate. The rest of the numbers aren't quite as dominant, with a .257/.332/.385 batting line allowed, but he's a guy who can soak up five or six outs if needed.

5-7. Kyle Barraclough, Drew Steckenrider and Adam Conley, Marlins: All three have had success in 2018, have plus stuff and also have years of team control left after this season -- three for Barraclough and Conley, five for Steckenrider -- so they won't come cheap. Yes, scouts have recency bias, and Barraclough's five-run blowup in the ninth inning Sunday won't help the Marlins extract premium value.

8. Keone Kela, Rangers: He 23-for-23 in save situations with 41 strikeouts and just two home runs in 34 innings. He has playoff experience with the Rangers in 2015 and 2016 and still has three seasons of team control. Given some health issues in his past, it makes sense for the Rangers to cash in.

If you really want a starting pitcher

The past few years have seen big-name/top-of-the-rotation starting pitchers get traded: Justin Verlander, Yu Darvish and Sonny Gray in 2017 (although Verlander was traded during the August waiver period); Rich Hill and Drew Pomeranz in 2016 (Pomeranz was an All-Star that year); Johnny Cueto, Cole Hamels, David Price and Scott Kazmir in 2015 (Price was also traded in 2014). It's unlikely any starters of that quality get dealt in 2018.

9. Cole Hamels, Rangers: He's a big name, but what are you getting? His strikeout rate has jumped back up this season, but he also has allowed 21 home runs in 109 innings on his way to a 4.36 ERA. For what it's worth, he has pitched his best against the best teams, with a 3.11 ERA in 11 starts against winning teams. He also has some no-trade provisions in his deal and might agree to a trade only if his $20 million team option for 2019 is picked up.

10. J.A. Happ, Blue Jays: The most likely starter to be traded, Happ had struggled, with 18 runs allowed in 12 innings, before a better outing Sunday against the Orioles, where he allowed one run in five innings while striking out nine. Still, that was the Machado-less Orioles and came with nine days of rest (other than a one-inning appearance in the All-Star Game). Maybe the Yankees or A's bite on him, but his value has certainly gone down with his recent performance.

11. Nathan Eovaldi, Rays: He returned in late May from missing all of 2017 after a second Tommy John surgery and has the same big fastball he's always had, averaging 96.9 mph with his heater. There's more control this time, as evidenced by a 53-8 strikeout-to-walk ratio. He's had one outing of no hits in six innings and two others with one hit, so there's some obvious upside potential for the final two months of the season.

12. Chris Archer, Rays: The Rays have resisted trading Archer for a couple of years now, but a large contingent of scouts witnessed Archer's 13-strikeout performance Sunday (although he allowed four runs in six innings). Archer has a 4.30 ERA and is headed to a third straight season with an ERA over 4.00, as he hasn't advanced beyond being a fastball/slider guy. He's still valuable, however, because he'll make just $27.7 million from 2019 to 2021 with two team options, and this might be a case where a change of scenery will help.

13. Dan Straily, Marlins: Is he exciting? No. Is he maybe better than somebody's current fifth starter? Maybe. Or maybe not. He has a 4.02 ERA while averaging barely five innings per start and a FIP over 5.00, but he also has been better of late, with a 2.78 ERA over his past five outings (although that comes with a .220 BABIP). As with Happ, maybe the Yankees would prefer a veteran over the likes of Domingo German or a struggling Sonny Gray.

14. Kyle Gibson, Twins: The Twins probably need to pack it in and Gibson, having his best season, is interesting trade bait because he's still under team control through 2019.

15. Matt Harvey, Reds: OK, the results have been a little better with the Reds (3.64 ERA), although some of the periphery numbers aren't as impressive. Still, he has shut down the Cardinals, Brewers, Braves and Cubs over the past month, giving up two or fewer runs.

16-17. Kevin Gausman and Dylan Bundy, Orioles. Given the Orioles' abysmal 28-72 record, their road to respectability is going to be years in the making. Maybe they consider imploding the entire team at this point, especially if the Braves or Yankees make a too-good-to-refuse offer.

Have bat, will travel

There are some intriguing position players potentially out there, but nobody who is likely to add more than a win or maybe two the rest of the way. Of course, one win could be the difference between winning a division, winning the wild card or missing the playoffs altogether.

18. Asdrubal Cabrera, Mets: Buster Olney tweeted Sunday that the Indians, Brewers and Phillies are among the clubs interested in the versatile Cabrera. The Indians could play Cabrera at second, as would the Brewers -- those clubs rank 24th and 26th in the majors in wOBA at second base. The Phillies are presumably looking at Cabrera for third base, given his lack of range at shortstop.

19. Wilson Ramos, Rays: The All-Star is currently on the disabled list with a hamstring issue, but a return engagement with the Nationals makes sense given Washington's MLB-worst .183/.268/.267 line from their backstops. (For the "What's wrong with the Nationals?" questions, it's hard to win with a seven-man lineup.)

21. Mike Moustakas, Royals: He has power and is sure-handed at third base (and the Royals have given him some time at first as well), although his low OBP and mediocre range means he's not really a big difference-maker. With Rafael Devers struggling, he could be a temporary fill-in for the Red Sox.

22. Jose Bautista, Mets: The Braves dumped him after 12 games, but he has .396 OBP in 51 games with the Mets. Certainly a useful bench bat for a playoff contender.

23-24. Brian Dozier and Eduardo Escobar, Twins: Two pending free agents whom the Twins might be interested in re-signing, so it's hard to predict what they'll do here. Dozier hasn't had a good season except in the power department (.225/.310/.414), but he's also had some monster second halves, including last year's 17 home runs in August and September. Escobar has cooled off after a hot start but can play third base (he's OK there) or shortstop (not very good there).

26. Adam Jones, Orioles: He's an icon in Baltimore, but even icons sometimes get traded.

27. Jacob deGrom, Mets: He'd match Machado in potential impact if he's traded -- maybe more so, given what we saw Verlander do last October -- but the likelihood of the Mets trading him remains low.

28. Adrian Beltre, Rangers: He is a free agent, but he also has 10-and-5 rights, so he can veto any trade. He has expressed an interest in returning to the Rangers in 2019, so he might not want to move -- although he's also chasing his first World Series title, so maybe he'd go to a contender for two months and a potential October run.

29. Josh Donaldson, Blue Jays: He hasn't played since late May because of a calf injury, so if he gets traded it will be probably in August after he returns from the disabled list and shows he's healthy enough to contribute.

30. Scooter Gennett, Reds: The All-Star is following up his breakout 2017 with an even bigger season, but he has talked about a possible extension with the Reds, which currently seems more likely than a trade. "I feel like they want me here," Gennett told MLB.com's Mark Sheldon right before the All-Star break. "I feel like, just from what I've been told, they want me here for the long term."