Tour de France continues as planned after attack in Nice 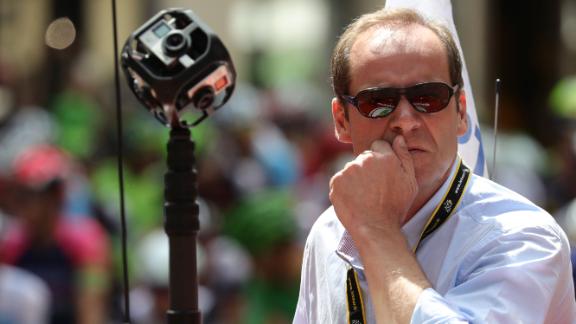 LA CAVERNE DU PONT-D'ARC, France -- The Tour de France rode on as planned Friday, with thousands of fans lining the roads and amid reinforced security a day after a deadly attack in Nice.

France was reeling again after a large truck mowed through a crowd of revelers gathered for a Bastille Day fireworks display in the Riviera city of Nice, killing at least 84 people Thursday night. The attack, on France's national holiday, followed attacks in November in Paris that killed 130.

The carnage did not deter cycling fans from showing up in numbers at the starting line in the small town of Bourg-Saint-Andeol.

"We can't let our guard down, but it was important that they continued the race," said Bruno Pruvost, a 56-year-old fan. "Otherwise, it would be too easy for them."

Froome extended his overall lead Friday after organizers decided the hilly, 23-mile leg from Bourg-Saint-Andeol to La Caverne du Pont-D'Arc in the Ardeche region would go ahead following an emergency meeting with authorities.

Froome finished second to Tom Dumoulin on the 13th stage but ahead of all other general classification contenders. A time trial specialist, Dumoulin was in a league of his own, but Froome limited his time loss to 63 seconds.

"It's terrible what happened and overshadows the day a lot," said Dumoulin, who also won a mountain stage last week in the Pyrenees. "So you're speaking to a man with two sides to his face today. Of course I'm happy with the win, but at the same time my thoughts are with everyone involved in the horrific attacks in Nice."

There was a moment of silence at the start, several hours' drive from Nice.After the stage, Froome was joined on the podium by the other jersey holders, Dumoulin and several Tour officials to pay their respects to the victims.

"Today, we want to pay homage to the victims with dignity," tour director Christian Prudhomme said. "We have been asking ourselves if the race should continue, and after consulting with authorities, we have decided that it should. The Tour de France will continue in a subdued and solemn manner."

France has declared three days of national mourning after the attack in Nice.

The publicity caravan -- which precedes the riders on the stage route every day, handing out free gifts and souvenirs and blasting loud music -- rode silently Friday.

Security already had been reinforced at the Tour this year, with France in a state of emergency since the Paris attacks. The three-week race is protected by an unprecedented force of 23,000 police officers, including SWAT-like intervention squads, while security guards perform bag checks and pat downs at the start and finish of every stage.

Eric Luzet, the police's liaison officer to the Tour, said extra security measures were implemented overnight, with 600 police officers in charge of security for the stage.

"We have adjusted our measures after what happened in Nice," Luzet said. "They have been deployed at the start and finish of the stage and along the 37.5 kilometers of the route."

Mollema -- who was involved in a crash with Froome in the final mile of Thursday's Stage 12 at Mont Ventoux, when a TV motorbike was forced to stop on the road because of fan congestion -- said his "thoughts are with the people in Nice."

Froome was awarded the same time as Mollema after he was forced to wait for a replacement bike following the incident, a decision that left Mollema unhappy. But the Dutch rider put his rivalry with Froome aside.

"I couldn't sleep yet and now read about something more important than the Tour," Mollema wrote on Twitter.

"Being French, gathering, celebrating, loving each other," he posted on social media. "And never giving up. I'm thinking about Nice."

The Associated Press and the Press Association contributed to this report.