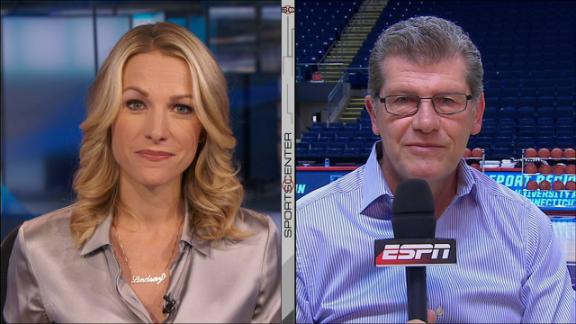 Breanna Stewart has already etched her name as one of the best in college women's basketball history.

Stewart once again made the team in dominating fashion, appearing on all 32 ballots selected by the national media panel that votes on the weekly Top 25. It's the third consecutive year that the 6-foot-5 phenom was a unanimous choice. Voting was done before the NCAA Tournament.

"To be given such a prestigious award three times in a row is unbelievable," Stewart said. "When you name those great players and to be in the same, I guess, class as them -- it's kind of crazy, because they've done so much for women's basketball and it makes me excited for what's to come."

While Stewart has been a fixture on the first team, Jefferson has steadily climbed her way up the list the last few seasons. She was an honorable mention All-American as a sophomore and made the second team last season.

"It's one of those moments that it's so surreal," Jefferson said. "Being able to play with Stewie and with [Morgan] Tuck, obviously, had a lot to do with it. They make my job a lot easier. So, coming in with them was probably the best decision of my life."

Stewart was thrilled that Jefferson made the first team.

"She deserves that," Stewart said. "When you are able to do it with a teammate, it makes it even more special because we've gone through everything this year together and now we can start celebrating what we've done together."

None of the five All-Americans had a harder road to making the team than Banham, who missed most of last season with a torn ACL suffered in December 2014.

"It means a lot," Banham said. "It's something that I always wanted and had been working towards," the guard said. "I told my coach at the beginning of year I want to be an All-American, and coming off an injury, it means a lot more to me."

She flourished in her return, averaging 27.6 points, including a 60-point effort that matched the NCAA record. That drew the attention of her idol Kobe Bryant, who tweeted about the Gophers playmaker.

The three seniors were joined by the two sophomores. Wilson really blossomed this year in helping South Carolina run through the SEC undefeated. She was excited to make the All-America team.

"That's something I always grew up thinking about. I've always wanted to achieve a lot of things. That's an honor. I'm blessed to be in this position and I can't really put it into words," Wilson said. "I have so much work to do to put into my game -- to have that honor when I'm just a sophomore really does warm my heart."

Like Wilson, Mitchell left her mark this season, averaging 25.7 points.

"Obviously, Kelsey is one of the best players in the country, and we're fortunate to have her in our program at Ohio State," coach Kevin McGuff said.

"She has such a relentless drive to be the very best that she can be. That drive is really infectious with the team, and she was a big part of our success this season."

UConn's Tuck was on the second team, along with Nina Davis of Baylor, Brianna Turner of Notre Dame, Tiffany Mitchell of South Carolina and Jamie Weisner of Oregon State.