U.S. blows out Serbia for gold 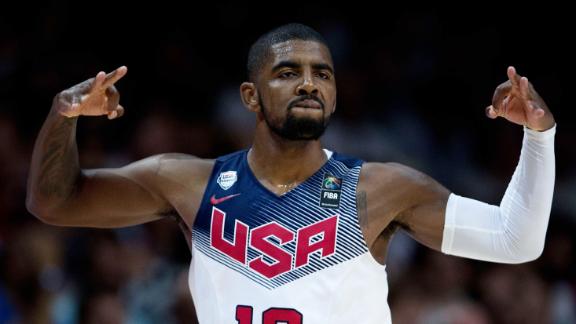 MADRID -- With golden confetti raining on their heads and "Party in the U.S.A." ringing in their ears, it must have been hard for the U.S. basketball players to hear anything.

Doesn't matter. They had stopped listening long ago.

All the questions about their talent, the doubts about their ability, were put down as easily as their opponents.

"It kind of was, again, a smack to our face, saying the U.S. was sending the B-team to go play in the World Cup," forward Kenneth Faried said. "Just because LeBron [James]'s not here, Kobe [Bryant]'s not here, [Kevin] Durant's not here, doesn't mean anything. We can step up and win the gold, too. That's what we did tonight."

And just like every other game, the Americans did it easily.

Tournament MVP Kyrie Irving made all six of his 3-point attempts and scored 26 points, and the U.S. repeated as world champion for the first time by crushing Serbia 129-92 on Sunday in the Basketball World Cup.

James Harden added 23 points for the Americans, who made 11 of 16 3-pointers in a sensational-shooting first half, adding one final romp to a tournament full of them.

This depleted team that was supposedly weak enough to lose was too good to be touched.

"Obviously we didn't have a very close game all tournament, but for that to happen we had to play hard for 40 minutes and not relax and not give any inch while we were out there," guard Stephen Curry said.

The Americans came in winning by 32.5 points per game and their closest victory in the tournament was by 21 points over Turkey. They thought they would get a tough game Sunday, but were simply too good to let that happen.

They finished at 58 percent from the field. They made 15 of 30 3-point attempts and had eight of their 12 players score in double figures.

"I think the results were dominant, but we had spurts of dominance in a lot of games," U.S. coach Mike Krzyzewski said. "And we had tough games and then all of a sudden we'd have a spurt and it looked like we dominated. Tonight we had like about a 35-minute spurt."

The Americans were supposed to have All-Star forwards Durant, Kevin Love and Blake Griffin, who all informed USA Basketball not long before the tournament that they would be unavailable.

But Irving and Harden stuck around, and despite sending the youngest U.S. team since NBA players debuted in 1992, the Americans remained as dominant as ever.

They have won 63 straight games -- 45 in official FIBA events and 18 in exhibition play -- and are automatically qualified for the 2016 Olympics in Brazil.

James, Durant, Carmelo Anthony and Chris Paul might want to return for that competition. But the Americans will have to leave room for some players from this team, which has loads of young talent that figures to get even better from the time it spent together.

It was the fifth world title for the Americans, tying Yugoslavia for the most all-time. And the second for Derrick Rose, who used this tournament as his return after missing most of the last two seasons following a pair of knee surgeries, along with Curry and Rudy Gay.

It was the first medal for Serbia, which had been a part of Yugoslavia when it won five. The Yugoslavians had been the last repeat champions, winning in 1998 and 2002.

The Serbians were only 2-3 in the group stage but then routed previously unbeaten Greece and Brazil before building a big lead and holding on for a 90-85 semifinal victory over France, which had beat them in the group stage and knocked out tournament co-favorite Spain in the quarters.

Serbia carried that momentum into the early moments of this one. Using a fluid offense that produced layups and dunks, Serbia opened the biggest lead any team had against the U.S. in this tournament when Miroslav Raduljica's three-point play made it 15-7.

That was wiped out in a minute, and Serbia's hopes of winning didn't last much longer.

"I don't think anything worked what we planned, but nevertheless I'm still happy with the effort that we put on the floor," Serbia coach Sasha Djordjevic said.

Harden had a three-point play and a 3-pointer, DeMarcus Cousins tied it with a pair of free throws, and then Irving had a jumper, 3-pointer and layup to cap a 15-0 burst that made it 22-15.

Irving hit a couple more 3s in an 11-0 run later in the quarter that provided a 35-19 cushion, and the Americans poured it on midway through the second in making it 56-30 after back-to-back 3s by Irving and Harden.

France beat Lithuania 95-93 on Saturday for the bronze.