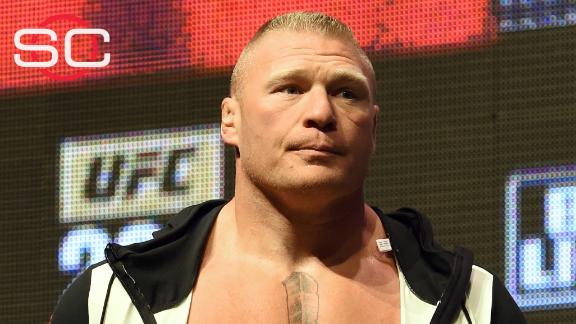 UFC officials were informed Tuesday that Lesnar, 39, failed a fight night drug test at UFC 200 on July 9 in Las Vegas. Results showed the presence of the same unidentified banned substance Lesnar tested positive for on June 28.

Neither of those test results were available to the promotion on July 9, which is how Lesnar (6-3) was still able to fight Mark Hunt at T-Mobile Arena. Lesnar won the fight via unanimous decision.

Lesnar, who is still under contract with the WWE and came out of retirement to face Hunt earlier this month, has not said much on the initial June 28 test. He told The Associated Press last week, "We will get to the bottom of this."

His appearance at UFC 200 marked Lesnar's first professional fight since December 2011. His financial purse, as reported to the Nevada State Athletic Commission (NSAC), was $2.5 million.

Under the UFC's anti-doping program, which went into effect July 2015, results management and adjudication of the case falls to USADA, although Lesnar will also be subject to the jurisdiction of the NSAC. The UFC and NSAC withhold the right to fine and suspend Lesnar, in the result of a confirmed doping violation. Lesnar has not publicly disclosed whether or not he intends to have his B-samples tested.

"It is important to note that, under the UFC Anti-Doping Policy, there is a full fair legal review process that is afforded to all athletes before any sanctions are imposed," UFC said in a statement. The Nevada State Athletic Commission also retains jurisdiction over this matter as the sample collection was performed at UFC 200 in Las Vegas.

"Consistent with all previous potential anti-doping violations, additional information will be provided at the appropriate time as the process moves forward."

Lesnar, a former NCAA wrestling champion and two-time defending UFC champion, had never tested positive for a banned substance before the June 28 out-of-competition test. The UFC's anti-doping program requires any retired fighter be subject to a four-month testing window prior to resuming competition, however the UFC elected to waive that requirement for Lesnar, whose fight against Hunt was announced one month prior to UFC 200.

According to the USADA website, Lesnar submitted eight total samples to the anti-doping agency. USADA official Ryan Madden previously confirmed to ESPN that Lesnar had submitted multiple test samples before June 28 and that each came back clean.

When asked about performance-enhancing drugs during an international conference call earlier this month, Lesnar responded, "I'm a white boy and I'm jacked. Deal with it."

Pending a successful appeal to the July 9 test, Lesnar's victory against Hunt will likely change to a no-contest. Following his successful return at UFC 200, Lesnar had not indicated whether or not he wished to fight again.
Related topics:
sportsespnmmamma ufcwwebrock lesnarusadaufc 200news wwemark hunt
Copyright © 2020 ESPN Internet Ventures. All rights reserved.
More Videos
From CNN Newsource affiliates
TOP STORIES