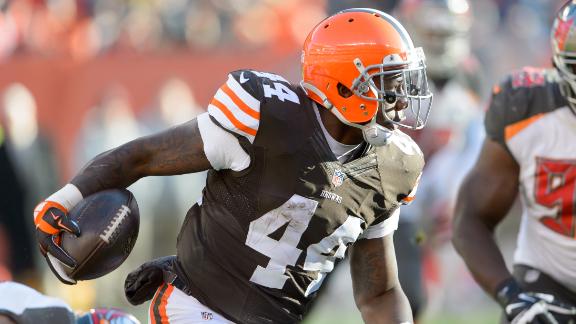 The Minnesota Vikings claimed running back Ben Tate on waivers Wednesday from the Cleveland Browns.

Unless he is able to win an appeal of his suspension, Adrian Peterson will miss the rest of the season. The Vikings have used rookie running back Jerick McKinnon as their primary ball carrier in Peterson's absence, and they have also given Matt Asiata plenty of work in passing and goal-line situations.

McKinnon, though, has been dealing with a low back injury and did not practice Wednesday. Asiata also missed practice with a concussion, and the health of both backs -- as well as the loss of Peterson -- could explain the Vikings' quest for more running back depth.

McKinnon leads the Vikings this season with 484 yards, averaging 4.9 yards per carry. Asiata has six rushing touchdowns and one receiving score, but he has averaged only 3.3 yards per carry, and neither he nor McKinnon has eclipsed the 21 carries Peterson had in the Vikings' season opener.

Tate had just two carries for minus-9 yards in last weekend's loss after complaining earlier in the week about the number of carries he was getting in the Browns' three-running-back rotation with Terrance West and Isaiah Crowell.

Tate agreed to a two-year contract worth up to $7 million in the offseason after serving as Arian Foster's primary backup with the Houston Texans the four previous seasons.

He had six carries for 41 yards in his Cleveland debut, which was soured by a knee injury that forced him to miss nearly a month of action. He ended up playing eight games with 106 carries for 333 yards and four TDs.

Since rushing for 202 combined yards in Weeks 5 and 6, Tate averaged 1.7 yards per carry in his last five games, going for 90 yards on 53 attempts.

Tate argued that his skill set hadn't changed, and the running game was an 11-man effort. He told ESPN on Sunday that he wasn't hurt and wasn't aware of any doghouse issues for him.

Tate was used primarily as a third-down back in Sunday's loss to Houston.

ESPN.com's Ben Goessling and Jeremy Fowler contributed to this report.

Vikings Claim Tate On Waivers
Darren Woodson discusses what Ben Tate offers to the Minnesota Vikings compared with the other running backs on the roster.