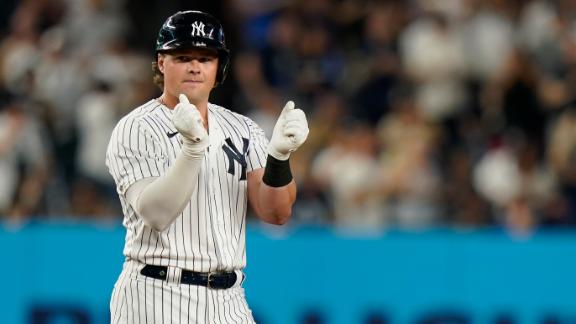 Voit's burst came three days after the 2020 major league home run leader implored manager Aaron Boone to keep him in the lineup, saying he deserved to play just as much as three-time All-Star Anthony Rizzo, acquired from the Cubs in July with Voit on the injured list.


"He's a good player and a good hitter," Boone said. "He's lost of lot of bats dealing with different injuries this year, so I know that part's been frustrating for him, but when he's in the lineup, he's a really good hitter in this league."

"So, I'm sure everyone's going to draw every conclusion like everyone always does that it's because of this. It's not because of that - he's a good hitter. He's a good player and he's gotten some big hits for us here over the last week and a big night tonight."

Rizzo returned this week after missing 10 days with COVID-19 but got the night off. Voit was getting hot in Rizzo's absence and continued that - he's hitting .500 (11 for 22) with three homers and 11 RBI in his past six games to raise his average from .220 to 260.

"Luke's back to himself.," New York second baseman DJ LeMahieu said. "It's been a tough year for him, just banged up and he hasn't really gotten his legs under him for an extended period. It just seems like he looks like himself again and obviously it's been a lot of fun watching him hit."

Voit hit a two-run bases-loaded single in New York's four-run first inning off rookie Charlie Barnes (0-3) and got another single in the second. He hit an RBI double in the fourth and homered to right-center to open the seventh.

"I thought he had really good at-bats," Boone said. "While the last week or whatever, where he's gotten some big hits for us and had some productive games, tonight I thought his at-bats were really consistent."

Aaron Judge and LeMahieu hit two-run homers as the Yankees won for the 20th time in 25 games since losing three of four in Boston from July 22-25.

Bronx native Andrew Velazquez drove in his fifth run this week with a bases-loaded walk and Brett Gardner hit an RBI single.

The Yankees also won by at least five runs for the first time since beating Baltimore Aug. 4. They had played 14 of 15 games decided by three runs or less before scoring double-digit runs for the sixth time this year.


Nestor Cortes (2-1) became the rare Yankee pitcher to work with a big lead and allowed two hits and four runs in a career-high seven innings. The crafty left-hander tied a career high with seven strikeouts, walked two and threw a career-high 104 pitches after his teammates sported "Nasty Nestor" t-shirts in batting practice.

"It's awesome," Cortes said. "I was telling my friends when you got a shirt like that, it means you finally made it."

Josh Donaldson hit a two-run homer and heard boos in each at-bat as Minnesota dropped to 10-27 against the Yankees since the start of the 2015 season.

With an array of leg kicks and deliveries, Cortes got his seventh career win and continued New York's run of outstanding starting pitching. Cortes' outing gave the Yankees a 2.93 ERA in their last 40 starts since Game 1 of their doubleheader against the Mets on July 4 and it marked the 30th time in that span a starter allowed two earned runs or less.

Cortes appeared to tire in the sixth when he allowed three straight hits before getting an out. After Donaldson hit his 17th homer, Cortes allowed a single to Mitch Garver on his 83rd pitch. Following a visit with pitching coach Matt Blake, he quickly finished the inning and then breezed through the seventh.

The Yankees loaded the bases without getting a hit when Barnes plunked Giancarlo Stanton on the foot and Voit made it 2-0 with a single to left that whizzed past the diving attempt of third baseman Luis Arraez.

After the Yankees took a four-run lead, Judge hit his 27th homer into the right field seats in the second. Voit made it 7-0 when Minnesota center fielder Nick Gordon was unable to make a diving catch at the left-center field warning track and the ball hopped over the fence.

Twins: OF Byron Buxton (fractured left hand) started a rehab assignment in Triple-A St. Paul. ... 1B/DH Miguel Sanó was placed on the paternity list. His wife had a baby girl Thursday morning and Sanó will rejoining the team next week in Boston. ... RHP Edgar García was recalled from Triple-A St. Paul. ... RHP Nick Vincent cleared waivers and was assigned to St. Paul.

Yankees: SS Gleyber Torres (sprained left thumb) started taking dry swings and fielding ground balls. Boone said most of the swelling from Torres' thumb is out. ... RHP Domingo Germán (right shoulder inflammation) experienced soreness Thursday following his bullpen session Wednesday. ... Gardner was lifted after getting hit by a pitch in the elbow in the fifth. Boone said Gardner was not getting any tests.