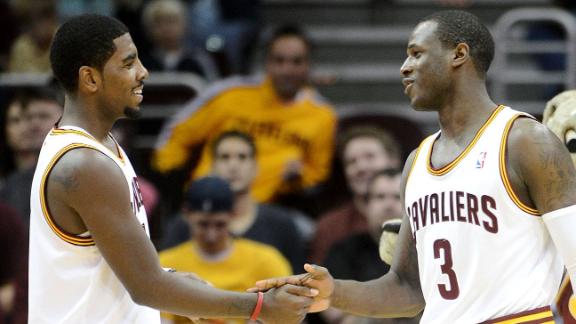 INDEPENDENCE, Ohio -- The Cleveland Cavaliers figure to have a target on their backs wherever they go this season, but there could be a little extra rivalry when they travel to the nation's capital.

Washington Wizards guard Bradley Beal told reporters at his team's media day Monday that he and John Wall are "definitely the best backcourt in the league."

"That's nonsense," Waiters said after practice Tuesday. "(Beal is) supposed to say that, but I know deep down, he's not messing with me and Ky (Kyrie Irving). I think me and Ky are the best backcourt, young backcourt. That's all."

While the stat lines aren't far off, the team results have been. The Wizards were the No. 5 seed in the Eastern Conference playoffs last season, making the second round after winning 44 games during the regular season.

Whether Waiters is right or not is purely subjective, but his backing of Irving is certainly a sign of growth from last season, when things got so bad between the two that a players-only meeting had to be called in late November to address their differences.

Waiters said that the additions of veterans such as LeBron James, Mike Miller and Shawn Marion have already changed the team atmosphere through just four days of training camp.

"The locker room is totally different from the first two years I've been here," Waiters said. "It's a different type of vibe. Everybody is talking, outgoing and then you got the vets who are easy to go to and talk to. They've been here 10-plus years, all three of them (James, Miller, Marion). It's just a great thing to be a part of."

James has put in extra time after practice going through shooting drills with both Waiters and Irving in the first few days of camp and sees the potential in each of them.

"It's high," James said when asked about the ceiling for the young guards. "It's really, really high. Obviously we know what Kyrie is capable of doing and I believe Dion can do some great things, as well. His ability to shoot the ball, handle the ball, his strength, his athleticism. I told him on every team there's a guy that they want to kind of place the blame on and it would be Dion on our team. I told him you can't get involved in that or what people say about you. It's not what people think of you, it's about what you think of yourself. The only way to re-write the notion of, 'Can Dion fit in this?' is to play the right way and to dominate his opposition every single night. That's all he should worry about."

James scoffed at the notion that Irving and Waiters cannot complement each other's games when they're on the court together.

"Yeah," James said when asked if Irving and Waiters would be able to thrive as a pair. "Why not? You got two guys that love to play the game of basketball. They're gym rats and they want to win and compete. So, it's not hard for them to mesh."

Waiters has purposefully attached himself to James from the start of camp, hoping the four-time MVP will rub off on him.

"We're just working together," Waiters said. "Just building that chemistry. At the end of the day, I want him to take me under his wing. He's been here. He's won championships. He's a proven player, the best player in the world and why not learn from a guy like that? I think I benefit from it. I'm like a sponge out there soaking everything up."

And James is happy to have Waiters as a pupil.

"I am noticing that with Dion and I will continue to stay on him," James said. "I want him to continue to learn the game mentally. I think physically, he could be a very good player if not a great player in our league. But our game is more mental than anything and when he can start thinking the game before he actually physically plays the game, I think he will be even more dynamic and I stay on him about that."

Part of the extra attention James has paid to Waiters has been geared toward convincing Waiters not to pay any attention to what anyone outside of the Cavaliers' organization says about him.

"From the outside looking in, it's always kind of been Dion," James said. "You know, 'Can Dion play alongside Kyrie?' And then when I came, 'Can Dion take the role that D-Wade (Dwyane Wade) took? Is he a selfish player? Is he not a selfish player? Can he play without the ball?' So, I'm not saying stuff that's not already been said.

"I know how you guys will take a sound bite and completely turn what I just said. I'm saying stuff that's already been said about Dion and I know that. So, for me as a leader of the team, he needs to understand that don't worry about everyone is saying about him. It's about us and it's not about what everybody else thinks."