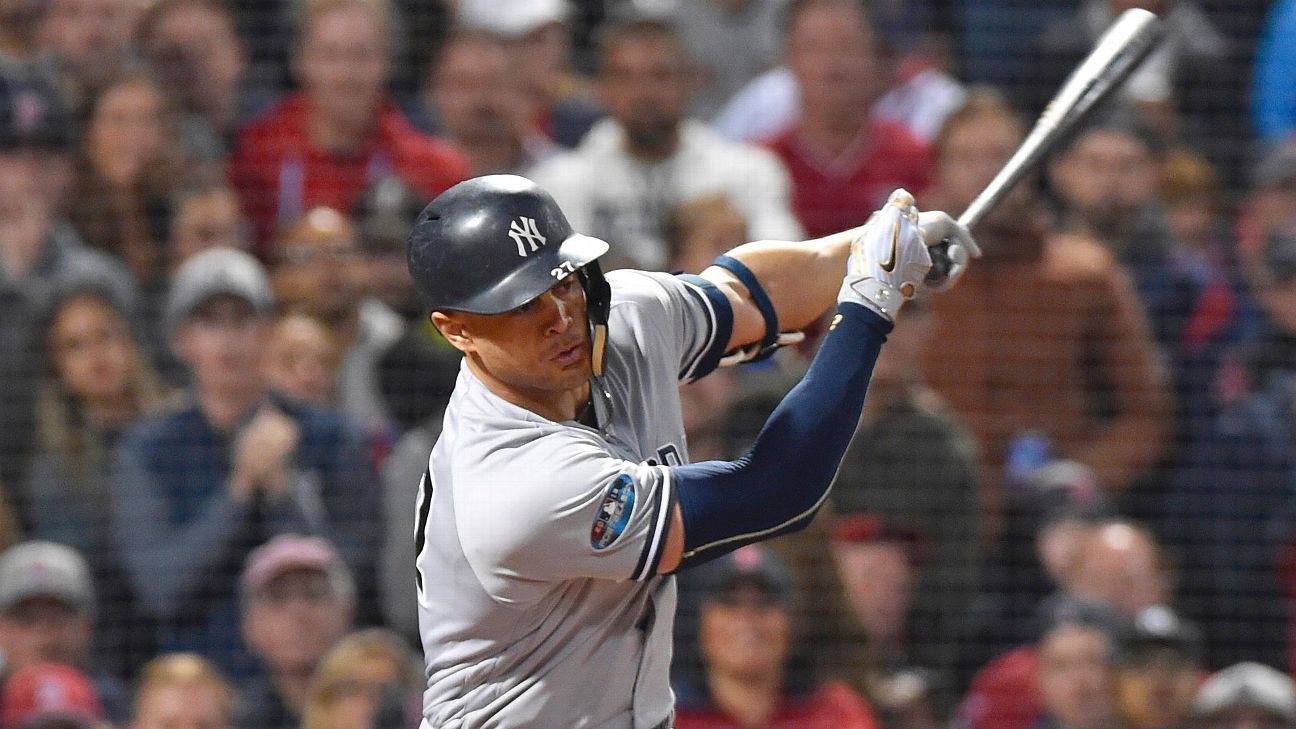 BOSTON -- This was what Giancarlo Stanton wanted all along -- a chance. Before he even slid his bulky arms into his pinstriped No. 27 New York Yankees jersey for the first time at an introductory media conference in December, the slugger had been simply seeking an opportunity to play for a team pursuing a World Series ring.

To even get that opportunity, though, he first had to make it to the playoffs. He can scratch that off the to-do list. Now, it's all about helping his team stay alive.

Successful pressure-packed postseason moments can really provide that life. After spending eight postseason-less years with aMarlinsfranchise that had trouble even getting to .500 regularly, Stanton -- a key cog in the Bronx Bomber machine -- can finally say he's truly chasing a championship.

But in order for a title to come, with the Yankees already trailing the Boston Red Sox 0-1 in the American League Division Series following Friday's 5-4 loss, and with Stanton coming up short in two clutch spots in the game, he still has work to do for his postseason impact to be felt.

"I wasn't able to get it done," Stanton said, just after he struck out in two late-game situations in which he represented the tying run. "I should've put the ball in play."

These moments of failure were tangible examples of something Stanton intimated earlier this week ahead of his playoff debut. He knew then that this postseason run, regardless how long it ultimately lasts, won't be easy.

Take one look at his body language coming into October and it's plainly evident just how much of a blast he had been having.

Perhaps no moment better exemplified his enthusiasm for finally playing on the postseason stage than when he tagged a hanging inside slider in the eighth inning of Wednesday's 7-2 win over theOakland Athleticsin the American League wild-card game. Extra insurance, the 443-foot home run Stanton crushed came off a mistake pitch from A's reliever Blake Treinen. Stanton sent it, seemingly, into outer space.

"What a moonshot. I was looking for that thing to go out the stadium he hit it so far," Yankees right fielder Aaron Judge said.

It was how Stanton reacted to the homer, though, that best let the Yankees know how at ease he was entering his first career playoff series.

As soon as the ball left his bat, going on a towering fly, Stanton paused for a moment, admiring its arc before slowly jogging up the first-base line.

"It's kind of what happens in the postseason when you're feeling hot and you're feeling great about what's going on in that game," New York center fielder Aaron Hicks said of Stanton's stare-down.

Stanton was so hot entering Friday night's ALDS opener that he brought an eight-game hitting streak into it. He also had homered four times in his previous four regular-season and postseason games, providing some timely power.

He ended up going 1-for-5 against the Red Sox, with a lined single that left his bat at 109.2 mph. He also scored a run during the Yankees' sixth-inning rally. But Stanton's bases-loaded strikeout an inning later on a low curve stalled another. And batting as the tying run in the ninth, his caught-looking strikeout on three pitches against Red Sox closer Craig Kimbrel might make it seem to his harshest critics that he can't be counted on in the most pressure-packed postseason spots.

"You know, that goes with Giancarlo sometimes," Yankees manager Aaron Boone said. "If you make pitches against him, his outs are a lot of times strikeouts."

But Stanton has had some success against Boston's Game 2 starter, David Price. Throughout his career, Stanton is 9-for-16 (.316) with three RBIs off him.

As well as Stanton had been playing of late, his four punchouts still were reminiscent of other times this season in which he has struggled. Remember his April? At the end of his first month in pinstripes, Stanton was hitting a tame .230 and had 43 strikeouts. Early in that stretch, he had a pair of five-strikeout performances in the Bronx that had a restless fan base ready to turn on him before he even got comfortable.

Inspired by all the strikeouts, the hometown tabloids didn't go easy on him, nicknaming the slumping superstar "GianKarlo" and "Stan' the Fan."

"I mean, all in all, a lot of things were different for me," Stanton said. "That's life. That's coming to a new team. The Yankees are more magnified than most, but you're aware of that going in, and you adjust for things you maybe didn't think about or process before."

Teammates believed it wouldn't be long before Stanton would snap out of the funk.

"We're going to look back on this," Judge said early in the spring, "and laugh about it."

Even opponents were bracing for Stanton to pick it up.

"We won't be having this conversation when he's hitting 7-for-10 with six homers," Red Sox right fielder Mookie Betts said at the time.

Stanton did go on to have his share of similarly effective stretches after April ended, finishing with a 38-homer season that also featured 100 RBIs and an .852 OPS. And those 38 home runs represented the second-highest total of his career. But now that he's playing for a team competing in October, none of that matters as much as what he delivers from here on out. 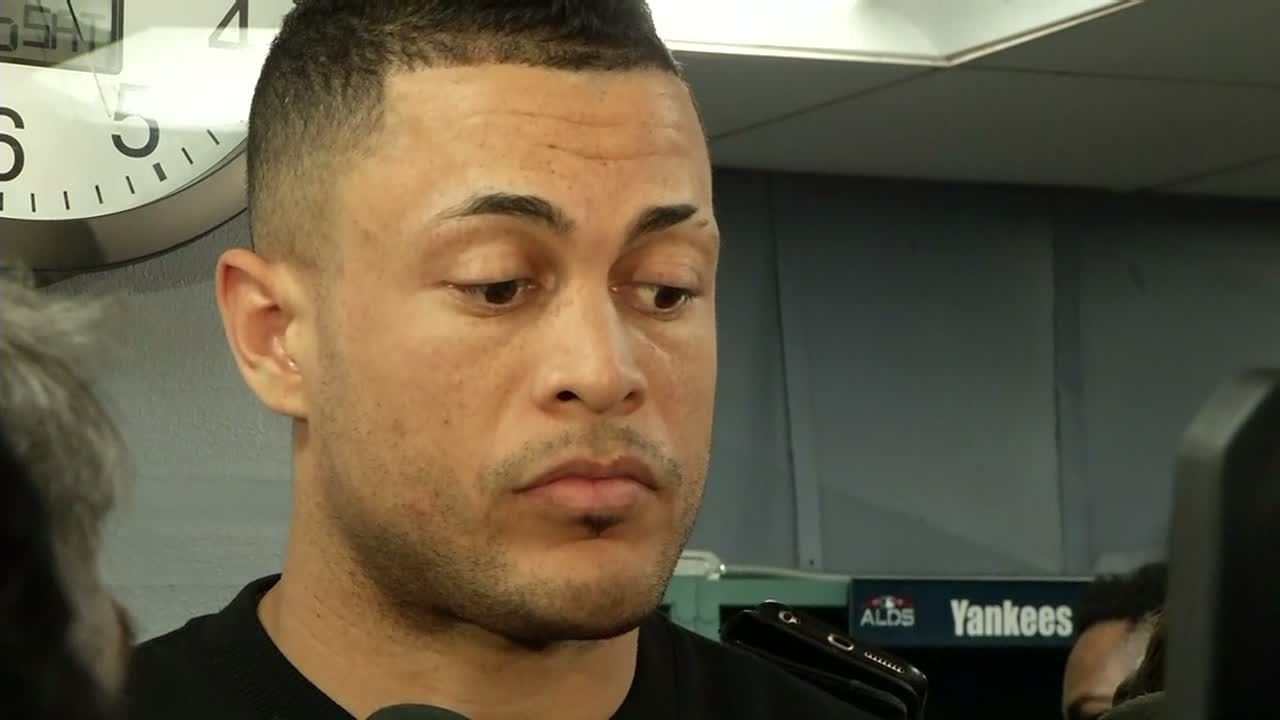 Stanton: 'I wasn't able to get it done'
Giancarlo Stanton reflects on his performance in Game 1, striking out four times on the night, including with the bases loaded in the seventh inning.
Report a correction or typo
Related topics:
sportsespnpostseasonmlb postseasonworld seriesmlbal division seriesgiancarlo stantonnew york yankeesaldsplayoffs
Copyright © 2020 ESPN Internet Ventures. All rights reserved.
More Videos
From CNN Newsource affiliates
TOP STORIES