While Astros confront past, Gerrit Cole 'thrilled for new adventure' with Yankees 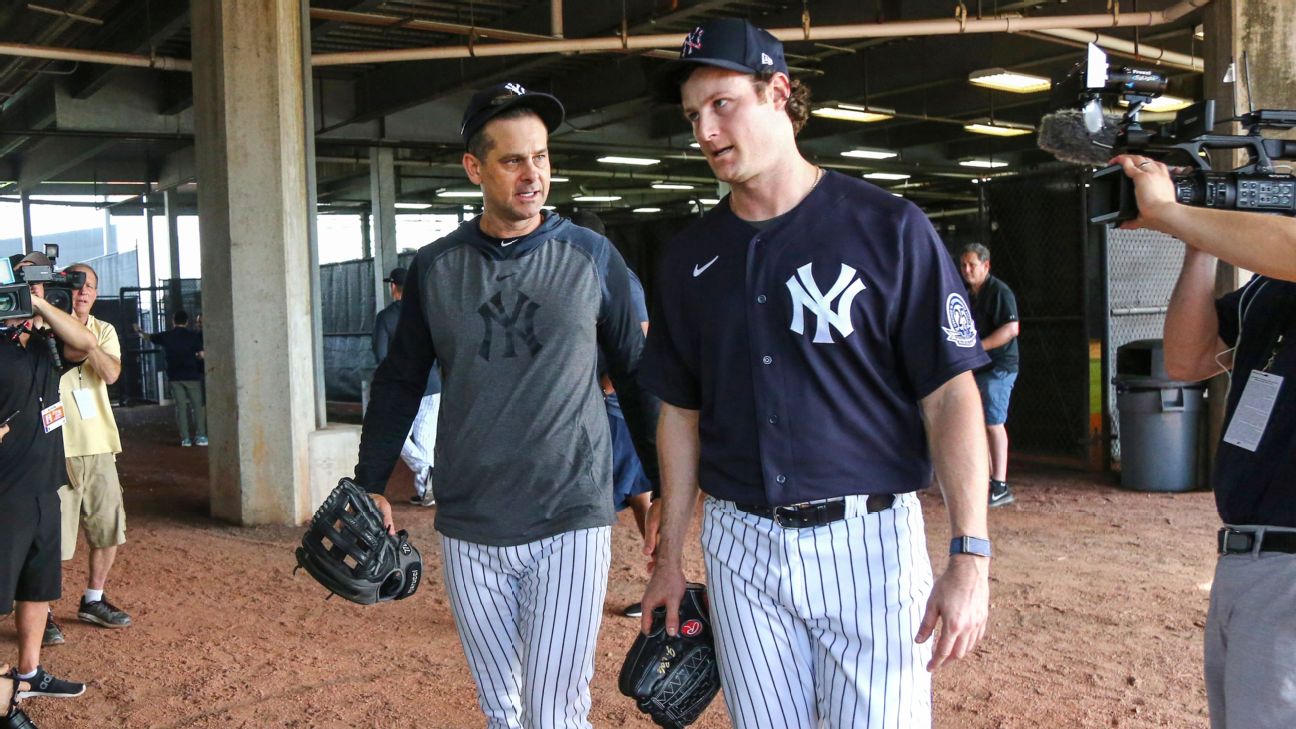 ESPN
By Buster Olney
TAMPA, Fla. -- Gerrit Cole ambled into the clubhouse at theNew York Yankees' facility for the first time the other day, glancing at the placards at the tops of the lockers to find his name and his spot. The Cucuzza brothers, Rob and Lou, make the decisions about who sits where, and Cole got the locker formerly occupied by Aroldis Chapman, who, because of his seniority among the pitchers, was moved to the coveted and spacious spot CC Sabathia had for years.

Cole has a pretty good locker, right underneath the clubhouse television, very handy for March Madness days, and as it turns out, he resides right next to a former teammate from his Pirates days, J.A. Happ. When Happ walked over, Cole greeted him happily, extending his forearm after noticing they both had the same modest watches.

In Pittsburgh, Happ and Cole were catch partners, sharing the daily ritual of tossing a baseball, and they are reunited in this. As Cole joked happily, he's relieved he won't be the guy left out.

While Cole's former Houston teammates are stuck in apology prison on the other side of the state, doomed to serve an indefinite sentence of penance, Cole is here, seemingly like a college student excited in his first days experiencing a new place, investing in a new set of friends.

Context is important: Cole was not part of the 2017 Astros team that, according to the commissioner's report released in January, beat the Yankees in the American League Championship Series while engaged in systematic sign stealing. He did pitch for the Astros in 2018, when the sign stealing continued, and in 2019, when the Astros again beat the Yankees in the ALCS. When Yankees manager Aaron Boone was asked Thursday about whether a bridge needed to be constructed for Cole with his new teammates, he initially misunderstood the question, because, as he clarified, the bridge is already there. Cole has been embraced already.

He joins the Yankees to be, in theory, the $324 million finishing piece to a team capable of being the first New York team to win a World Series since 2009. The Yankees have a dominant bullpen and their lineup led the league in runs last year, but Cole appeared to be the difference between Houston and the Yankees in the playoffs. The ace, the No. 1 starter. Now Cole is theirs, wearing No. 45. As far as the right-hander is concerned, the burden of expectations -- the Steinbrenner Doctrine of World Series or bust -- is anything but onerous.

"I love it," he said. "From a player's perspective, it doesn't get much more simple than that.

"I've been champing at the bit," he continued. "I'm thrilled for this new adventure."

He threw his first bullpen session for the Yankees on Wednesday, 25 pitches, and when it was over, after the finishing tap of the glove with catcher Gary Sanchez, Cole stood and talked with Yankees staffers, Boone and new pitching coach Matt Blake and a small horde of others. Five minutes passed. Ten minutes. Twenty minutes.

Cole was cheerily animated, talking about his philosophy of working in to left-handed hitters and away from right-handed hitters and the setup of the catcher, among other topics. He loves to talk, he said, and for a baseball junkie, this was baseball mainlining. With other responsibilities calling them away, Boone and others drifted off, the crowd dissipating around the celebrity newcomer who clearly enjoyed the face time with everyone.

At the outset of the first team meeting Thursday morning, Boone spoke with Yankees pitchers and catchers about bringing a positive energy into the clubhouse, about contributing to the work environment, and for Cole, this resonated.

There haven't been any vibes that other Yankees expect Cole to bare his soul about the Astros' cheating scandal. As a pitcher, he wouldn't have had direct involvement anyway, and in his news conference after his workout Thursday, he indicated that he didn't really know anything. If teammates approach him with questions, he said, he'd answer as honestly as possible, but there is no sense here that any veteran Yankee will demand anything of him. He came here to pitch, to lead.

Meanwhile, his former Houston teammates appear destined to lead the majors in road attendance in 2020, but not for reasons any of them might've envisioned when they hoisted the 2017 championship trophy.

Before Cole walked out of the building here Thursday, he sat in a pair of jeans, a T-shirt and running shoes, and chatted with Lou Cucuzza, one of the clubhouse godfathers, buoyantly showing Cucuzza something on his phone.

The Cucuzza brothers haven't laid out the locker assignments in Yankee Stadium yet, so it's unclear whether Cole will inherit Sabathia's old locker or some other spot down pitchers row, maybe closer to where Happ is. But it's already evident that whatever spot Cole is given, he will be exactly where he wants to be, as part of the Yankees. 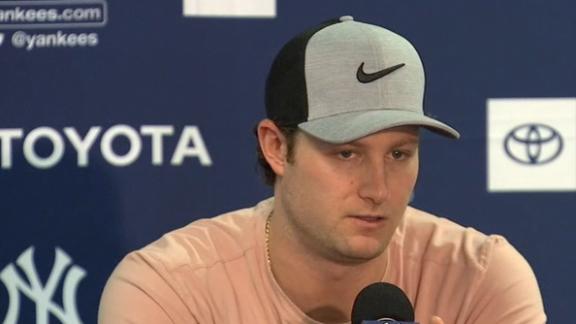 Cole addresses Astros' sign-stealing scandal
Gerrit Cole says that he was unaware of the Astros' cheating and doesn't have anything to apologize for. 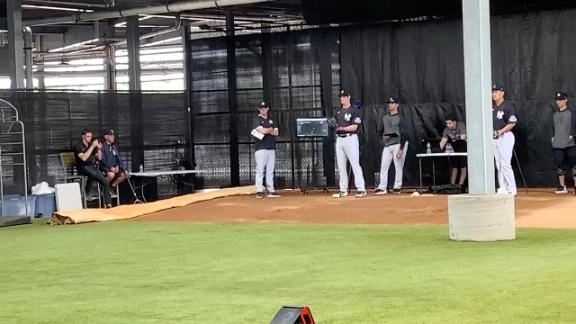