Winter meetings predictions: What's going to go down in Orlando 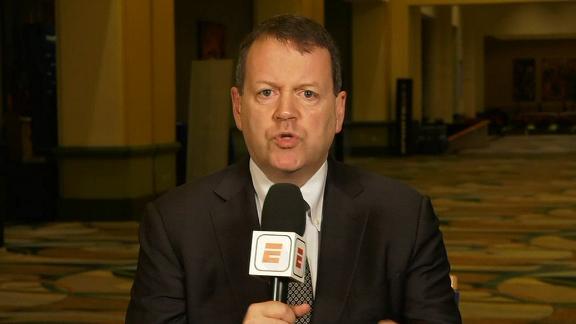 With much of the industry and the leaders of all 30 teams on site in Orlando, Florida, the winter meetings should deliver rumors, splashy trades and big-money moves by free agents. We asked our experts to predict what is likely to happen at the meetings before everyone leaves at the end of the week.

Which team will be most active?

I expect it to be someone from the Red Sox-Cardinals-Giants contingent. St. Louis and San Francisco showed how invested they are in acquiring a big bat when they spent five weeks in a futile pursuit of Giancarlo Stanton. Maybe they take a plunge into the free-agent market or resurrect talks with Miami with a focus on Marcell Ozuna or Christian Yelich. The Red Sox aren't necessarily in panic mode after the Yankees acquired Stanton, but you have to think they have a greater sense of urgency to add a bat along the lines of a J.D. Martinez or Eric Hosmer now that New York's lineup features two players who combined for 111 homers in 2017. -- Jerry Crasnick

The Giants need a center fielder with range, a corner outfielder with power, a third baseman and bullpen help. I'm not sure how they can acquire all that without exploding the payroll, but that's the likely scenario if they really want to get back into the playoff picture. This team is 94-140 since the 2016 All-Star break, the worst record in the majors. One big addition isn't enough, so the Giants should be busy on both the trade and free-agent fronts. -- David Schoenfield

I'll cop out and go with a tie between the Cardinals and Giants. They've been the most-whispered-about teams in the rumor business, and after they whiffed on their big swings, I suspect we'll see them make frenzied attempts to enact their respective Plan B's in Orlando. It's easy to understand why the Cardinals would be making a push; with the Giants, I'm less certain I agree with their approach. --Bradford Doolittle

What's one big prediction for the week?

Now that Shohei Ohtani has signed with the Angels and Stanton has been traded, the run on free agents can really begin -- and it will start with starting pitchers. Unlike with the slugger market, the demand for pitching far outweighs the supply, which means teams will begin lining up for Jake Arrieta and Yu Darvish. Arrieta, being a Scott Boras client, will wait for Darvish to set the market. But it wouldn't be surprising to see both pitchers sign this week while offense-needy teams try to bargain hunt before taking the plunge for Martinez and Hosmer. -- Scott Lauber

The Yankees go all Evil Empire on everyone and sign Darvish for the rotation. OK, a more realistic scenario is the Yankees re-signCC Sabathia for two years. Or maybe they go with youngsters Luis Cessa and Chance Adams in the fifth spot. But maybe Hal Steinbrenner turns into his father, forgets limits on the payroll and the luxury tax, and goes all-in for 2018 and beyond. -- Schoenfield

The Red Sox and White Sox swing another big deal, this year sending Jose Abreu to Boston for a new stack of prospects to help complete Rick Hahn's restocking of Chicago's farm system. Abreu is arbitration-eligible for two seasons, and that's a better bet for Boston -- financially as well as performance-wise -- than any of the other offensive options on the market. Both teams win the trade, and Hosmer loses because his best possible landing spot as a free agent goes away. -- Christina Kahrl

Pick an under-the-radar team that you think will be active this week.

TheArizona Diamondbacks. While everyone is focused on the ticking clocks in the Orioles' and Nationals' front offices because Manny Machado and Bryce Harper will become free agents next winter, the Snakes have to deal with the fact thatPaul Goldschmidtis under club control for just two more seasons. Their window to reach the postseason extends only that far, while their stack of arbitration-eligible players this winter could take their budget beyond $100 million for just the third time in franchise history. I'm expecting GM Mike Hazen to try some creative solutions to work around that expanding budget while keeping the team competitive. -- Kahrl

Don't be fooled by Seattle's payroll. Between the money the Mariners already have committed for 2018 ($126 million) and the money they're expected to spend on arbitration guys and rounding out the roster ($29 million), they are already slightly above the team-record $154 million payroll they had on Opening Day last year. But as long as GM Jerry Dipoto is the one pulling the strings, the M's will be movin' and shakin'. -- Eddie Matz

Pick one surprise you think could happen this week.

One of the harder teams to read for me has been the Rays, and I could see them leaping into full rebuild this week. Few teams have as many good, movable starting pitchers who can bring the kind of return to really stack what is already a pretty good minor league system. The Rays have been kind of treading water, and with what's going on in the AL East, that isn't going to get them to the postseason. If Erik Neander does take this route,Evan Longoria could end up on the block. -- Doolittle

Having missed out on Ohtani, the Minnesota Twins -- yes, the Twins! -- will sign Darvish. In order to build on their surprising wild-card berth, they are looking to add a top-of-the-rotation starter. They wanted Ohtani, but now they'll turn their attention to Darvish. -- Lauber

Who signs first:Arrieta or Darvish? And which arm would you prefer if you were a GM?

I think Darvish signs first, if only because of the price tag Boras has slapped on Arrieta and Boras' track record of waiting until January for the market to evolve. It's a close call, but I'd prefer Arrieta because I would feel more comfortable putting the ball in his hand in a big game or in the postseason. Maybe it's unfair to question Darvish based on two horrendous World Series outings, but scouts and evaluators had questions about his ability to perform under extreme pressure even before he imploded against Houston in October. If I'm giving someone $150 million, I want to make sure he's ready to embrace the big stage. I have concerns about how well Arrieta will hold up physically as he approaches his mid-30s, but he keeps himself in great condition, and he's as competitive as it gets. -- Crasnick

Darvish signs first, with an AL club to be named later. He's also the pitcher I'd rather have. Darvish is slightly younger but has the significantly better strikeout rate, despite spending most of his career in the DH league (and pitching in a tough park in Texas). Despite the surgical histories of the two, Darvish is the stronger upside play if you're going to go beyond three years on a deal for a pitcher. The Boras factor also looms large. If Boras got five years for Jered Weaver and Ian Kennedy, not to mention seven forMax Scherzer and Stephen Strasburg, what do you think Arrieta expects? Do you, as a GM, really want to give Arrieta anything like five years or more when his FIP just ballooned to 4.16 last season? Arrieta's 2014-2015 run of dominance was amazing; it's also not what a buyer will get from him. -- Kahrl

Who signs first: Hosmer or Martinez? And which slugger would you prefer if you were a GM?

Martinez will sign first for the simple fact that he isn't a first baseman. Teams that are interested in Hosmer might be inclined to also consider Carlos Santana, Logan Morrison and even Yonder Alonso and Lucas Duda, all of whom won't cost as much. As an outfielder, Martinez might be pursued by a different subset of teams.

Choosing between Martinez and Hosmer really depends on what a team needs. The Red Sox, for instance, should prefer Martinez because they ought to be prioritizing power after finishing last in the American League in homers for the first time since 1993. Hosmer is the better defender at his position and has a reputation as a winner and clubhouse leader, qualities that will appeal to plenty of teams, but he has never hit more than 25 homers in a season and tends to hit a lot of ground balls. Martinez and Mike Trout are the only players to bat .300 with at least 125 home runs, 350 RBIs and a 140 adjusted OPS over the past four seasons. For pure power, Martinez is the better bet. -- Lauber

Well, they're both Scott Boras clients, so there's no tie-breaker there. I'll say Hosmer signs first, if only because his estimated contract would be less than Martinez's, thus conceivably bringing more teams into the bidding process. Plus, those "Hosmer to the Padres" rumors are heating up. If Martinez gets something like six years and $150 million and Hosmer six years and $120 million, I'd probably go with the Martinez contract. First-base production is still relatively easy to find, and Hosmer's inconsistency should make a team wary about paying $20 million for the kind of production you can find for much cheaper. -- Schoenfield