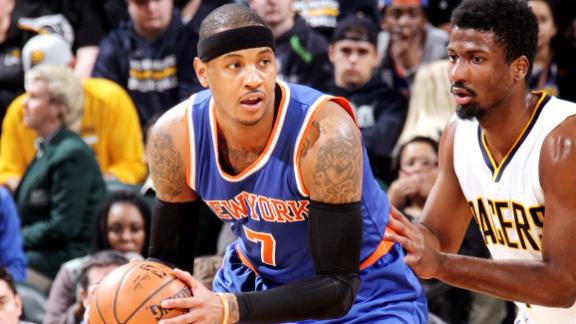 Carmelo Anthony is going to be fine, as he is the most natural scorer the New York Knicks have had since Bernard King. He will get his knee rehabilitated over the summer, and he will come back next season to score 25 a night -- and probably do some of the other things required of an NBA player who isa little better than he is given credit for.


Phil Jackson? Now there's a recovering star worthy of your concern. As a rookie team president, all Jackson did was prove that he was a hell of a head coach, and that maybe Red Auerbach had a point -- beyond his petty jealousies -- when he said the man who had replaced him as the league's all-time lord of the rings had never built anything.


Jackson is the reason Anthony made a public confession Thursday that you don't often hear from big-name athletes in noisy, big-time markets. Asked if there were times during this ungodly 17-65 season when he thought he'd made a mistake sticking with the Knicks over the Chicago Bulls and other win-now options during free agency, Anthony said the following:


"I try to keep myself from thinking like that. But as a human being those thoughts definitely come into play. You sit down at night and you're thinking, 'Did I really make the right decision?' ... But not often did I think about that. There was one point in time this season where it was just cloudy and I didn't really have any clarity and I was second-guessing what I did and the decision I made."

Though the Knicks never lead the league in smart public-relations choices, trotting out Anthony alone on the day after the worst season in franchise history ended was a particularly wise call. Jackson and coachDerek Fisher were exposed as overmatched novices in Year 1, and while they do deserve some time to prove their championship pedigree will overcome their mistakes, there was no point in showing their faces to a fan base already tired of seeing them.


Anthony has been keeping it low since his surgery, but beyond that, he's the one Knick who's actually good at his job. Though it's assumed in some NBA corners that he's a self-absorbed jerk, Melo is actually a relatively friendly franchise player (if a 17-65 team can have a franchise player) with an agreeable personality, a healthy understanding of the marketplace, and even respect for the news media. Why the Knicks don't do more to make him the human face of an otherwise cold and forbidding organization is beyond me.


Either way, fans don't have to fret over what they'll get from Anthony the next two or three seasons. He said Thursday that he expected to return to the court "stronger mentally" after sitting and watching -- and even coaching --lesser teammates as they failed and failed and failed some more.


"I never thought I would have this much clarity being away from the game of basketball," Anthony said.


That clarity is applied to the team's immense challenge in the coming months, when Jackson will have a top-five draft pick -- and maybe the overall No. 1 -- along with about $30 million in salary-cap space to make the Knicks relevant again. Anthony said he watched so much basketball while recovering that his wife ordered him to turn off the TV, and that he did have some thoughts on the Karl-Anthony Towns vs. Jahlil Okafor debate (he wouldn't share those).


"I think this class is pretty powerful," Anthony said. He revealed that he plays amateurgeneral managerin his own office with the most prominent members of that draft class, and with the league veterans who will be available through free agency or a trade, putting their names on his own personnel board.


"I like to kind of break stuff down and see who's available and who's not available," Melo said. "And who fits and who don't fit and how we can get this person and that person. So yeah, I'm very in tune to that side of it."


It's encouraging to hear that Anthony remains that engaged. But in the end, all that matters are the names Jackson has on his board in his office, and to date he's inspired little faith in his ability to have those names in the proper order.


By trading Tyson Chandler for Jose Calderon, Jackson didn't just cut against the grain of traditional NBA thought by exchanging big for small, he also dealt productive for non-productive. Jackson also got nothing useful out of dealing non-stars J.R. Smith and Iman Shumpert to the Cleveland Cavaliers, who sent two first-round picks to Denver for another non-star, Timofey Mozgov, and stood by helplessly while his old friend and noted asset-compiler, Pat Riley, effectively edited Goran Dragic out of the Zen Master's master summer plan. Jackson thought his Knicks could make the playoffs this year, and his judgment there was worse than that of his point guards. Go ahead and name the Knick who got better under Jackson, inside his cherished triangle, other than Langston Galloway.

So Anthony didn't need a second look when asked what his team needs most. "Players," he said. "I can't get no more specific than that. Just players. Good players."


Jackson was signed for $60 million over five years to identify and successfully recruit good players, and his former GM in Chicago, Jerry Krause, told ESPNNewYork.com that Jackson "took the job for the money," no other reason. His motives don't matter anymore. His performance does.


Anthony said he hasn't lost any faith in his boss, and perhaps he wasn't quite as candid on that one as he was when confirming he's second-guessed his decision last year to pick the Knicks over the Bulls, who now carry a 50-32 record into the playoffs. Melo also said he'd be definitely willing to "be the second option" if Jackson signed a superstar to lighten the offensive load.


The team president needs to hit one over the wall, at least one, and the evidence so far suggests that's a long shot. As far as recovering Knicks stars go, fans should be less worried about Carmelo Anthony's knee than they are about Phil Jackson's eye.