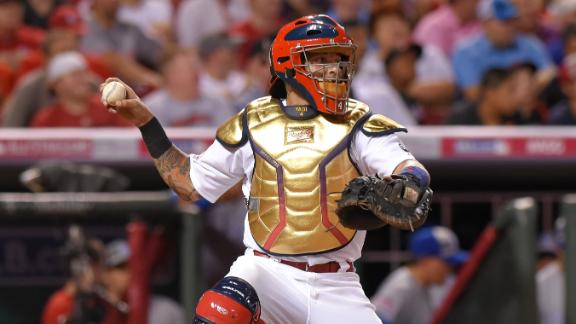 Molina, 33, now has an opportunity to win his fourth Rawlings Platinum Glove Award, given to the top overall defensive player in the National League and American League.

All 18 Gold Glove winners, nine in each league, automatically qualify for the Platinum Glove awards, which are determined by fan voting on Rawlings.com.

The NL and AL winners will be announced Friday night during a ceremony in New York.

Molina's eighth Gold Glove moved him ahead of Bob Boone and into third place behind Ivan Rodriguez (13) and Johnny Bench (10) for the most Gold Gloves by a catcher.

Yoenis Cespedes, who was traded from the Detroit Tigers to the New York Mets on July 31, played long enough to not only qualify for the AL Gold Glove in left field, but also win it over the Royals' Alex Gordon, who was last year's AL Platinum Glove winner and was seeking his fifth consecutive Gold Glove award.

The Gold Glove Award winners were announced on a special edition of Baseball Tonight on ESPN2 on Tuesday, with the active participation of some of the winners. The broadcast also featured performance analysis by Baseball Info Solutions, whose metrics help determine the awards under the Gold Gloves' new voting procedures.

Including Escobar and Cespedes, there were nine first-time winners overall. Among them was San Francisco Giants shortstop Brandon Crawford, who got the award over two-time Gold Glove winner Andrelton Simmons of the Atlanta Braves.

Since 2013, the Gold Glove awards have been calculated based on a combination of two variables -- voting by managers and coaches, and the SABR Defensive Index, which measures runs saved at a player's defensive position.