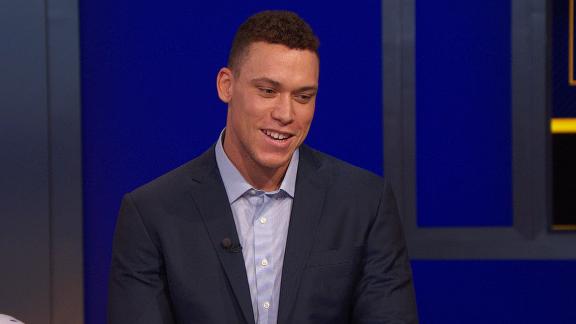 NEW YORK -- Yankees slugger Aaron Judge is a finalist for AL MVP and Rookie of the Year, giving him a chance to become just the third player to win the awards in the same year.

The Baseball Writers' Association of America revealed the finalists for its major awards on Monday night. The winners will be announced next week.

Judge could be a unanimous winner for Rookie of the Year, but the MVP field also includes Houston second baseman Jose Altuve and Cleveland infielder Jose Ramirez.

The 25-year-old Judge, who made his major league debut last year, hit .284 with 52 homers and 114 RBIs in 155 games this season. Led by Judge's breakout, New York got into the playoffs as a wild card and made it to the American League Championship Series before it was eliminated by Altuve and the Astros.

Houston went on to win the World Series for the first time. In addition to Altuve, the BBWAA also recognized A.J. Hinch from the Astros as a finalist for AL Manager of the Year alongside Terry Francona of the Indians and Paul Molitor of the Twins.

The race for NL MVP also is intriguing. Miami slugger Giancarlo Stanton, who led the majors with 59 homers and 132 RBIs this year, is competing against first basemen Paul Goldschmidt of Arizona and Joey Votto of Cincinnati.

Stanton and Votto each played on losing teams, while Goldschmidt helped the Diamondbacks get into the playoffs as a wild card.

The NL champion Dodgers could take home three awards. Cody Bellinger could join Judge as a unanimous winner for Rookie of the Year, Clayton Kershaw is going for a fourth NL Cy Young Award and Dave Roberts is up for Manager of the Year.

Pittsburgh first baseman Josh Bell and St. Louis infielder Paul DeJong round out the field for NL Rookie of the Year, and Boston outfielder Andrew Benintendi and Baltimore slugger Trey Mancini also are up for the AL award.

Kershaw is competing against Washington aces Max Scherzer and Stephen Strasburg. Corey Kluber of Cleveland, Chris Sale of Boston and Luis Severino from the Yankees are up for the AL Cy Young Award.