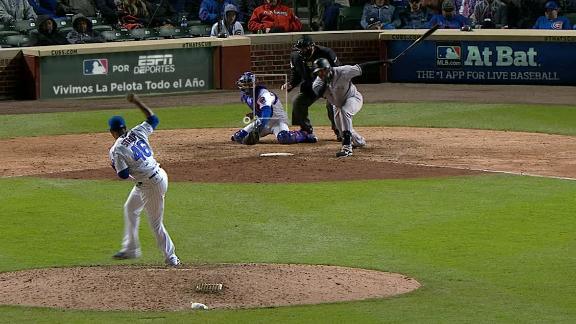 The Yankees and Cubsbroke a major league record for combined strikeouts in a game with 48 on Sunday night in New York's 5-4 victoryin 18 innings at Wrigley Field.

The record fell when Yankees catcherAustin Rominebecame the game's 44th strikeout in the 17th inning, while facing Cubs relieverPedro Strop.

Four more K's pushed the total to 48 as the game stretched into the 18th inning, making it MLB's longest of the season by innings and duration. It also was the first interleague game to go 18 innings and the longest in game time, at 6 hours, 5 minutes, in the history of Sunday Night Baseball, since the series began in 1990.

The previous record of 43 strikeouts was set in a 20-inning game between theLos Angeles Angels and Oakland Athleticsin 1971.

Starlin Castro drove in Hicks with a fielder's choice in the 18th for the go-ahead run.

Hicks led off with a bunt single against Strop (0-2) and advanced to second when the Cubs' catcher, Contreras, threw it into right field for an error. With one out and Hicks on third, Castro hit a bouncer up the middle. Russell tried to throw home, but it was wide, and Hicks scored easily.

"I know we lost, but you've got to try to have fun with it," Rizzo said.

Before Hicks scampered home with the winning run, the biggest highlight of extra innings belonged to Schwarber. The Cubs' slugging left fielder went into the stands in foul territory for an outstanding catch on Headley's foul popup in the 12th.

What was left of the crowd also sung along when the Cubs showed a tape of Harry Caray singing "Take Me Out To The Ball Game" for the second seventh-inning stretch in the 14th.

Chicago trailed 4-1 before it rallied in the ninth against Aroldis Chapman, who helped the Cubs win the World Series last year for the first time since 1908. Albert Almora Jr. and Javier Baez each singled in a run before Chapman hit the slumping Rizzo on his left wrist with the bases loaded on his 36th pitch, forcing home the tying run.

Rizzo got an X-ray on his arm and it came back negative.

"Thank my parents I drank my milk when I was a kid," Rizzo said. "Decent bones."

Tyler Clippard then came in and got Ben Zobrist to bounce to second for the final out.It was Chapman's first blown save since Game 7 at Cleveland.

"I felt normal. It just wasn't my night tonight," Chapman said through a translator.