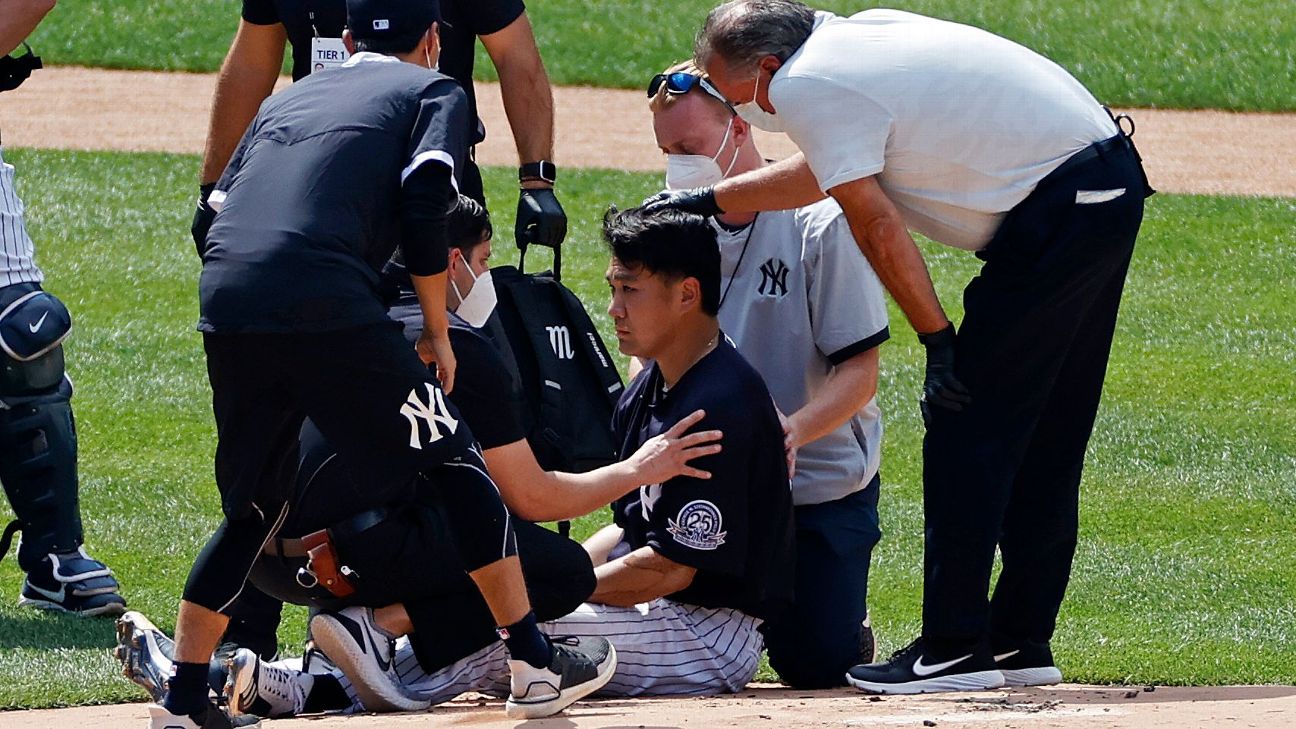 The New York Yankees are relieved that starting pitcher Masahiro Tanaka is doing well after being drilled on the right side of his head by a Giancarlo Stanton line drive Saturday afternoon.

"Masa had concussion-like symptoms that have since dissipated. He went through a battery of tests at the hospital; everything checked out well," Yankees manager Aaron Boone said. "He had a CT scan, and it's negative. He's still there. They're going to keep them for a couple more hours just to be safe, but we expect him to be released this evening. I would say right now he's doing well."


After Boone addressed the media at the end of the workout, the Yankees released a statement that said Tanaka had been released from the hospital.

Tanaka posted a message on his Twitter account saying: "I appreciate all the support. I feel it a bit right now, but I'm all good. Going to try to get back on the mound ASAP! Thanks again for all the encouraging words!"

Boone said Tanaka, who is 75-43 with a 3.75 ERA, 947 strikeouts and 200 walks in six seasons with the Yankees, would go into the concussion protocol. But the team felt that it was good news overall given the fact that the right-hander, who was throwing his first simulated game on the team's first official day of summer camp workouts, immediately collapsed on the pitching mound after he was hit.

Major League Baseball's standardized concussion protocol requires players to be completely symptom-free or be placed on a seven-day injured list.

Stanton, who knelt at the plate as soon as Tanaka was hit, was shaken up by the event but later returned to finish taking part in batting practice. In 2014, then with the Miami Marlins, Stanton suffered gruesome injuries to his face, including a broken jaw, when he was hit by a pitch.

All Yankees players stood by silently as the medical staff rushed over to attend to the starter, who is a key piece of the team's rotation.

"A little bit of relief to see him walk off, and seemed to be at least OK immediately, and then we were able to let Stanton know a little bit later that he was doing well. I don't necessarily want to speak for G [Giancarlo], but he seemed to handle it as well as could've been expected," Boone said. "Any time you see that on a baseball field, and then add a layer that it's a teammate -- that stops you in your tracks and you hope for the best. So that's one of those real unfortunate scary moments that happens every now and again in our game."


"It's definitely horrible," said left-hander Jordan Montgomery, who requested an "L screen" to protect himself as he followed Tanaka to throw his simulated game. "I'm just thinking and praying for him right now. I hope that he's OK and doing good."

"Obviously, it sucks to see something like that, especially during something as simple as a sim game," said outfielder Aaron Hicks, who was on the field watching teammates Aaron Judge, Gleyber Torres and Stanton hit against Tanaka, 31. "It's just one of those things where, as soon you step onto the field, anything can happen, and just kind of sucks that it happened to him."

"We had two players -- and we've received permission from them -- that tested positive before coming to New York, before intake testing," Boone said. "DJ LeMahieu and Luis Cessa are both self-isolating right now at their homes, outside the state of New York right now. In DJ's case, he's been asymptomatic the whole time; in Luis' case, very mild symptoms. We're hopeful that it'll be a short time, but they are not here at this point. We'll see how that continues to unfold the next several days."

Catcher Gary Sanchez and closer Aroldis Chapman were the other two Yankees not present at the stadium Saturday afternoon, but Boone said it was not because of injury or illness but because they had not finished their intake and testing protocols amid the coronavirus pandemic. 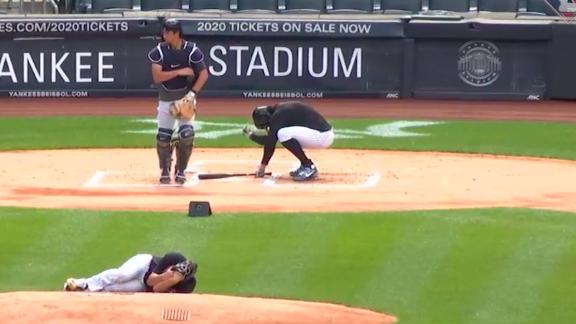 Tanaka hit in head by line drive
Masahiro Tanaka was taken to the hospital after being hit in the head by a Giancarlo Stanton line drive. 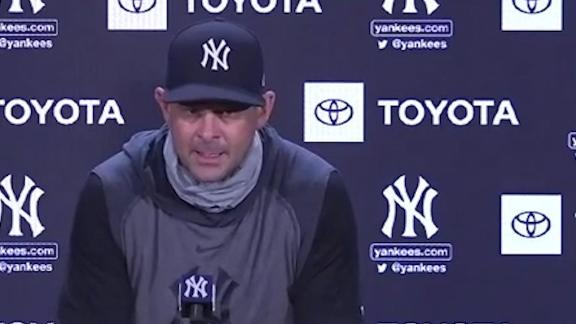