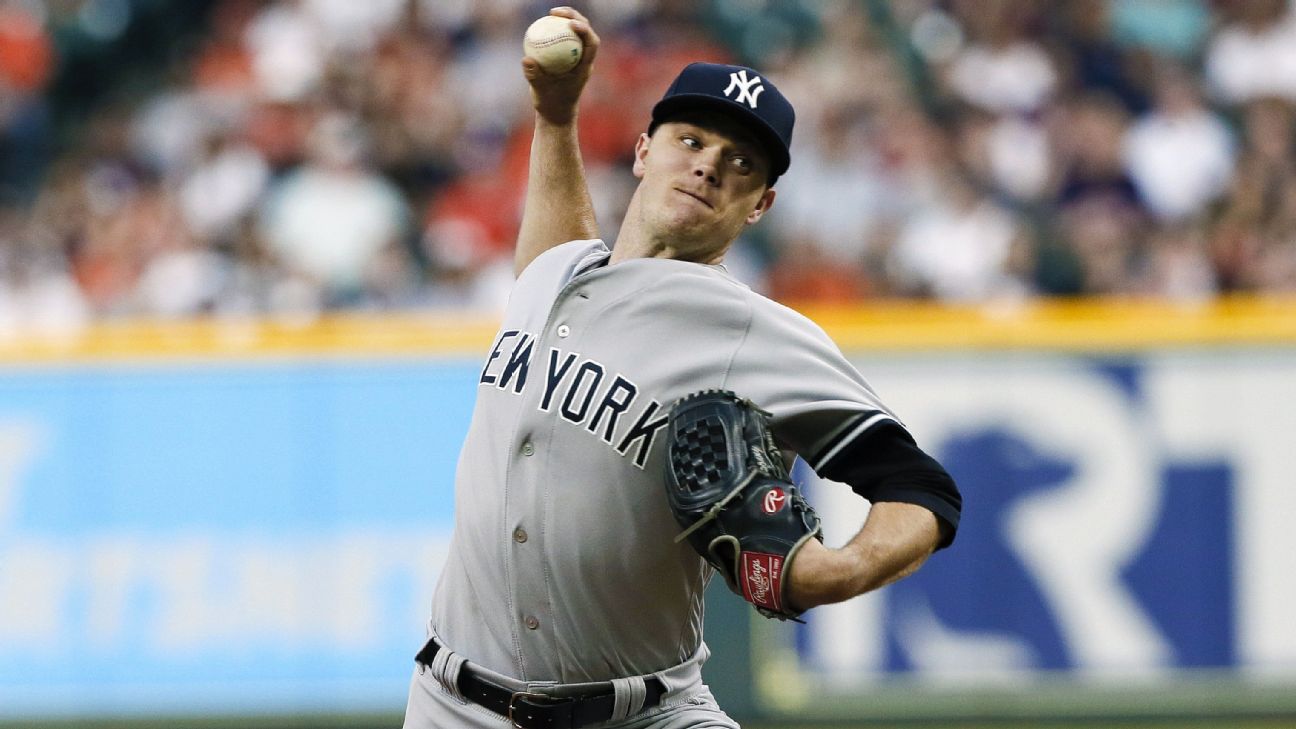 HOUSTON -- New York Yankees pitcher Sonny Gray appears, for the short term at least, to be getting a personal catcher.

Yankees manager Aaron Boone said following Gray's strong six-inning, two-run, four-hit outing Monday that the right-hander likely would get another game with help from Austin Romine, the backup catcher who has caught his past two starts.

That help, Boone contends, primarily is the product of nuances in the schedule.

"His next start is probably Saturday when we're home [against Cleveland], which will be a day game after a night game," Boone said. "So especially in those kind of scenarios like here where we travel and got in in the middle of the night and where you knowGary [Sanchez]is going to be down.

"At least in the short term we'll do that [with Gray and Romine] and hopefully get to a point to where it doesn't matter."

After beating the Los Angeles Angels on Sunday night, the Yankees took a cross-country flight and didn't arrive at their hotel in Houston until after 4 a.m. Monday. Because of that, Boone gave Sanchez part of the opener against the Houston Astros off, using him as a designated hitter until late substitutions forced him to catch one inning.

Whatever Boone's motivation, there is no denying that Gray's past two starts have been among his best of the season. There also appears to be no denying that Romine has had a hand in that.

"He just adapts to the game and flows," Gray said. "There's a great communication. In between innings there's constant communication, which for me is extremely beneficial with everything I try to do with the baseball."

Although Gray recorded a loss to the defending champion Astros, who won 2-1, he featured a lively fastball that helped him regularly get ahead in counts. A first-inning balk led to an early run, and he got into a bases-loaded jam in the fourth. Otherwise, he was sharp.

When he did get in trouble, Gray said, "that's the spots I really rely on [Romine] for."

Gray said he might have shaken off a Romine sign just once the whole game. He felt like they were on the same page all night.

Said Boone of Gray's ability to get out of danger: "The last two outings it feels like adversity within the game isn't affecting him. He's coming back and continuing to make pitches."

Boone and Gray both called this outing a "step forward." It was the second time they made such a remark in a week. They also said it after Gray's three-run showing in a 4-inning outing last week provided small glimpses of the pitcher the team traded for last season.

Prior to that outing, Gray had two others in which he gave up a combined 11 earned runs and couldn't make it out of the fourth. Sanchez, New York's starting catcher, was behind the plate for both of those games.

Since joining the Yankees last season, Gray has a 2-7 record with a 5.94 ERA and 11 home runs allowed in 53 innings with Sanchez catching him. With Romine, Gray is now 3-2 with a 2.75 ERA and two homers allowed in 39 innings.

In the past, Boone has indicated he isn't in favor of pitchers using personal catchers. He doesn't want to use a singular matchup all season, only for it to be potentially spoiled by any number of factors by the time the postseason begins. Once October arrives, Boone would like for each of his pitchers and catchers to have spent time together throughout the season.

Gray echoed Boone in saying he wants to build a solid rapport pitching to both Sanchez and Romine.