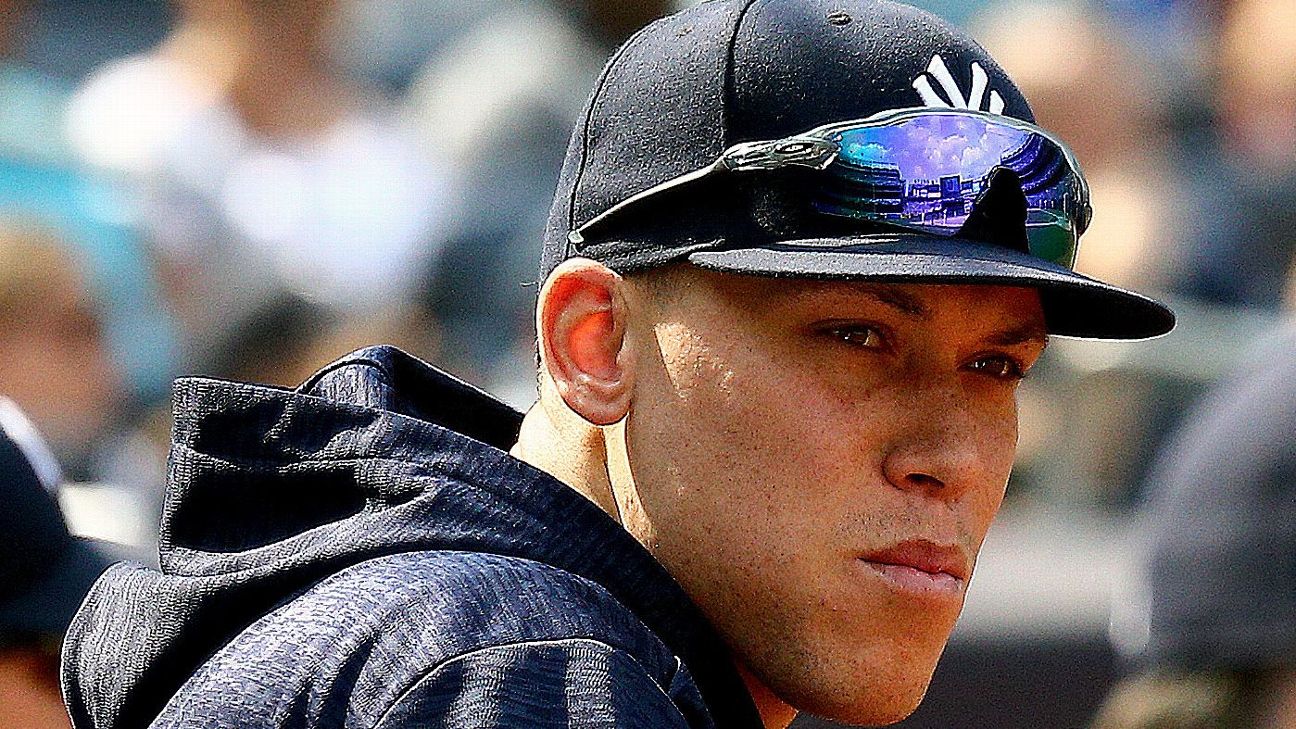 NEW YORK -- Aaron Judgewas back in the Yankees' lineup Tuesday night, going 0-for-4 in his first start since July.

Judge batted second and finished with two fly outs to right field, a double play and a check-swing strikeout. Still, after Neil Walker's three-run homer in the eighth inning, the Yankees won the series opener against the Boston Red Sox in the Bronx3-2.

Despite the hitless performance, Judge was still generally pleased with how he played.

"I felt like I never left. Everything felt good," said Judge, who had spent nearly eight weeks on the disabled list. "Felt like my at-bats were good, I'm seeing the ball well. That's all I can really ask for, coming back after missing that many weeks.

"I'm excited with the start, we got the win, and we've just got to keep that rolling."

Judge's first-inning at-bat against Red Sox starter Nathan Eovaldimarked his first plate appearance since he suffered a chip fracture of the right wrist when he was hit by a pitch July 26. Judge came off the 10-day disabled list on Friday and had played two innings in the field, but the Yankees hadn't cleared him to hit until Tuesday afternoon.

"We'll kind of watch it closely and see how he bounces back," Yankees manager Aaron Boone said before Tuesday night's game. "We'll pick our spots to maybe try and get him out of there, and we'll just kind of go day-by-day with this -- as far as how he's bouncing back and how he's feeling -- but I'm looking at it as: 'We're going.'"

Judge's return comes with the Red Sox awin away from clinching the American League East. The Yankees, meanwhile, are trying to retain their lead in the AL wild-card standings over theOakland Athletics.

If it hadn't been for Mother Nature, Judge likely would not have gotten this start until Wednesday.

When Boone arrived at the ballpark and first wrote out the lineup Tuesday morning in advance of the game's original 1:05 p.m. ET start time, he did not put down Judge's name.

But around 9:30 a.m. ET when the Yankees and Red Sox were debating moving the game's first pitch to 7:05 p.m. ET due to rain showers that were forecast over the Bronx all afternoon, Judge had a chance to change his skipper's mind.

"Kind of deliberated on [playing Judge] after we got finished," Boone said.

After spending the noon hour thinking about giving Judge the start, Boone went first to general manager Brian Cashman, then his assistants, his training staff and ultimately Judge before determining whether the 26-year-old slugger would hit Tuesday.

Judge believes his relentless push to play after repeatedly pleading to do so finally got Boone and others to cave.

"I just voiced my opinion -- a lot," Judge said. "They kind of got tired of me telling them I'm going to be playing. They finally said, 'Let's put him in there and let's see what happens.'"

Judge's return marked the first time since July 2 that the Yankees have had their six 20-homer players in the same lineup. In the 38 games that Judge, Giancarlo Stanton, Didi Gregorius, Miguel Andujar, Gleyber Torres and Aaron Hicks all have played together this season, the Yankees are 28-11.

Boone isn't sure how long it might take Judge, who batted .285 with 26 homers and 61 RBIs before his injury, to return to his dangerous power-hitting form.

"As I've kind of said leading up to this, hitting's a funny thing," Boone said. "Sometimes it happens real quick. Sometimes it takes a little bit of time.

"It's just a matter of getting that good timing. That's something that even for great hitters, it can come and go a little bit. So we'll see as the next couple days unfold."

Before Judge was hurt, Yankees right fielders had combined to bat .273 with a .918 OPS; they also averaged 13.7 at-bats per home run. Since Judge last hit July 26, the right fielders that the Yankees have used to replace Judge batted .187 with a .652 OPS, and they averaged 20.8 at-bats between home runs.

New York hopes Judge's addition will not only shake up those numbers, but also give life to a team that went 26-22 after his injury.

"I definitely think certain guys energize a situation," Boone said. "When we're talking about Aaron, not only is he a special player, but he's a special presence on our club.

"Writing that [name] down on a long day at the ballpark for us, it was nice to write him in and just to see the effect it has on lengthening our lineup. We're certainly excited to have him back."