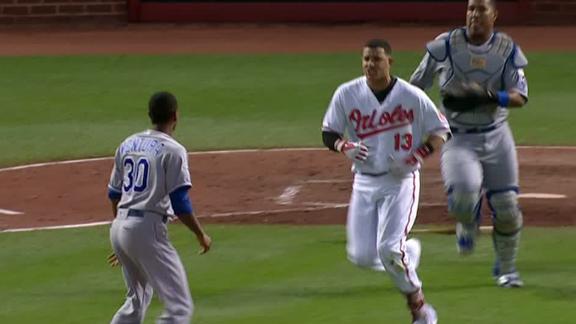 With one out in the bottom of the fifth inning and the Orioles leading 5-1, Ventura's first pitch to Machado -- a 99 mph fastball -- hit the Baltimore slugger in the back. Machado charged the mound as Ventura prepared for the confrontation by taking off his hat and glove. Machado threw a punch at the Kansas City starter and slammed him to the ground.

With the crowd at Camden Yards chanting, "Man-ny, Man-ny," both benches and bullpens flooded the field. Machado was restrained by teammate Chris Tillman after the initial contact.

After the Orioles routed the Royals 9-1, Ventura insistedthe errant throw was unintentional and implied that Machado has a reputation as a hot head.

"Everybody knows what kind of player he is," Ventura said through an interpreter. "One just got away and he came at me, and I have to defend myself at that point."

"I thought he was trying to hit him the at-bat before," Showalter said. "That's why I talked to him before he took his last at-bat. I wanted him to be aware of it."

Even though he had been prepped by his manager, Machado said he didn't think when he was hit by the pitch, that he just reacted.

"I don't regret anything," he said. "It's part of the game. Reactions fly. When somebody's throwing 99 at you, it's going to hurt. You can ruin someone's career. You don't think in that situation. You just react to it."

Both Machado and Ventura are likely to be suspended.

"I don't think that should be in order," Ventura said.

Said Machado: "You got to deal with the consequences once you cross that line."

The Royals and Orioles play the finale of their three-game set Wednesday night. Asked whether he thought tensions between the teams would continue, Showalter said, "Bring it on; we'll handle it."

Ventura previously hit Machado and Chris Davis in a Royals win on Sept. 12 last season. Ventura also came close to hitting Machado, who had homered in the Orioles' win Monday against Kansas City in the second inning. Ventura threw inside twice with Baltimore leading 5-0, and they exchanged words at the end of the at-bat after Machado flied out.

Machado said he didn't know what was Ventura's intention with the inside pitches and that his words to Ventura were not about that.

Ventura had already given up four first-inning runs and a long home run to Ryan Flaherty in the second inning, and the defending World Series champion Royals are now on a six-game losing streak.

However, he refused to assign blame for the fray.

"That's a tough question to answer," he said. "You know, Ventura, in Manny's first at-bat, was pitching him in. Obviously, he didn't like it -- flew out and was screaming at Ventura. I'm thinking, 'OK, he's going to pitch him inside again.' I mean, looked to me like [the pitch got away from him]. I don't know; that's something you're going to have to ask him, but I don't know who's at fault there."

For Ventura, this marked his third career ejection. In addition, he was suspended seven games last season after an angry exchange with the Chicago White Sox's Adam Eaton led to a brawl between the teams.

Yost was asked whether Tuesday night's fifth-inning pitch, if it wasn't an accident, was a sign of immaturity.

The ejection was Machado's fourth of his career. Despite the pre-at-bat warning, Showalter said he was not disappointed by Machado's reaction to being hit. Neither were his teammates.

"I'm glad for Manny for defending himself," said Adam Jones, who also said he would pay any fine Machado receives. "Screw it. Defend yourself. If somebody's trying to hurt you maliciously, you go out there and you defend yourself. I hope the league goes and sees and reviews exactly what happened, because you can't go out there when you've got a weapon or something at 100 miles per hour, you don't have to hit and you're trying to hurt somebody. That's not part of the game. If you have to hit? All right, cool. The tables can be turned, and he can get his fair share at the hitting." 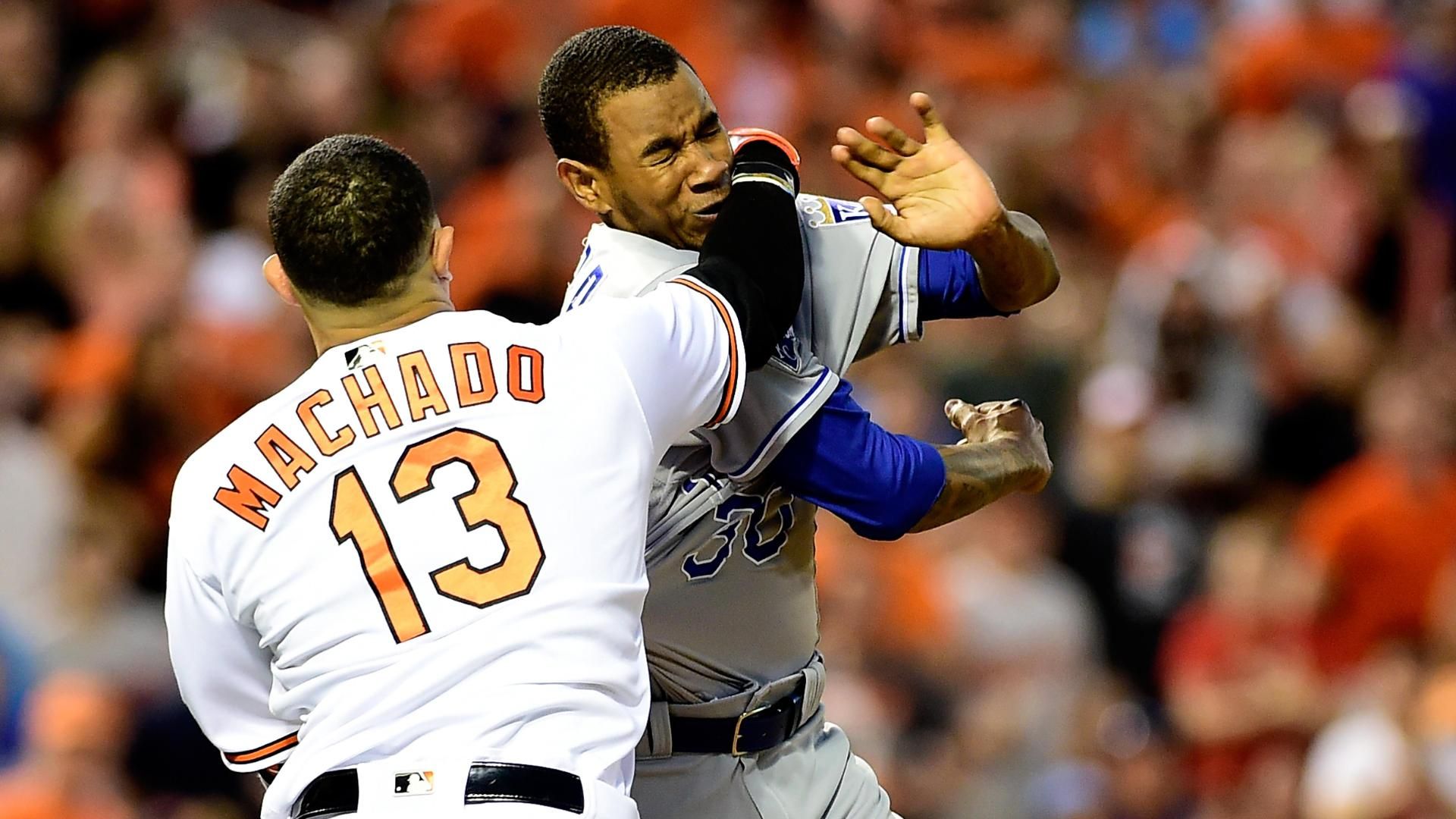 Machado: 'I don't regret anything'
Manny Machado talks to reporters about charging the mound after he was hit by a Yordano Ventura pitch and says he doesn't regret his actions.

Showalter: I don't like when my guys are put in harm's way
Orioles manager Buck Showalter says it's not the first time Royals pitcher Yordano Ventura has hit a batter and isn't disappointed in Manny Machado's reaction to it.