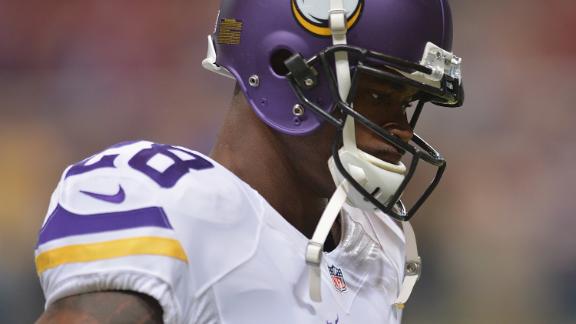 Though Adrian Peterson has said that a fresh start with a new team might be beneficial, coach Mike Zimmer told ESPN NFL Insider Ed Werder that he believes the star running back will return to the Minnesota Vikings when he's reinstated.

In an exclusive interview published by USA Today Sports on Thursday, Peterson hinted that some within the Vikings organization haven't been supportive and so he's thought about getting a fresh start with a new team.

"I know there's people in the organization that support me and there's people that I know internally that has not been supporting me," Peterson told USA Today Sports. "Maybe it's best for me to get a fresh start somewhere else."

League sources told ESPN NFL Insider Adam Schefter that Peterson was referring to Vikings general counsel Kevin Warren as the individual who wasn't in favor of his return.

Sources familiar with the case also told Schefter that Warren and the NFL have been working together to make sure Peterson does not return this season.

Earlier this week, NFL commissioner Roger Goodell suspended Peterson for the rest of the season amid child abuse allegations in Texas and told Peterson that he will not be considered for reinstatement before April 15, 2015, for his violation of the NFL's personal conduct policy.

Peterson, who has not played since Week 1, pleaded no contest on Nov. 4 to misdemeanor reckless assault for injuring his 4-year-old son with a wooden switch. His appeal of the NFL suspension will be held Dec. 2.

"I think Adrian wants to be back here," Zimmer told ESPN. "You have to ask him. I don't know. But I know he does have an awful lot of people here who have supported him, and I don't know who he's speaking of who doesn't.

"All I know of Adrian is that he's always been great with me, always done what I've asked him to do, and I kind of go by what I see."

Zimmer said Peterson, who has spent all eight seasons of his pro career with Minnesota, is well-liked by the Vikings coaching staff and that teammates were disappointed with Goodell's announcement.

Sources told ESPN that the Vikings ownership -- along with general manager Rick Spielman -- have been heavily involved in effort to have him play this season, an indication they may take him back when reinstated.

"Throughout the whole season we've known he's been gone and I think players were disappointed with the ruling," Zimmer told ESPN. "It's really about Adrian taking care of himself. Everybody really likes this kid, feels like they hope he comes out of this thing good. So it's more concern for him than anything else."