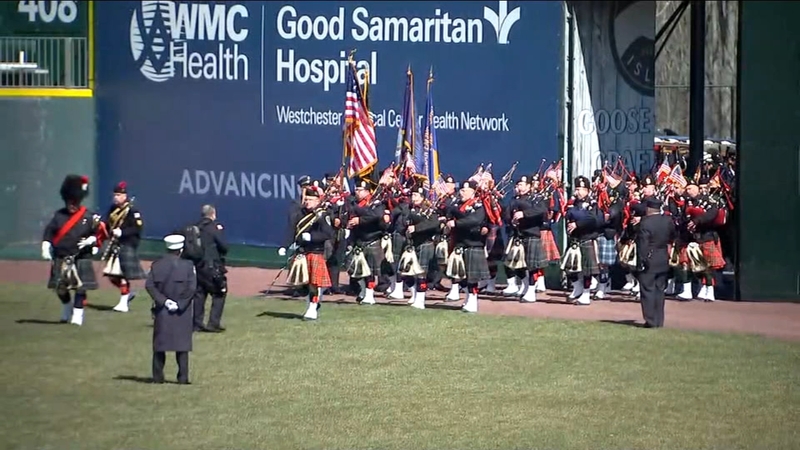 SPRING VALLEY, Rockland County (WABC) -- A final farewell was held for the firefighter who lost his life last month in a massive fire at a nursing home residence in Rockland County.

"This was one of the worst fires Spring Valley has ever had," Chief Spring Valley Department ... Jared sacrificed his life for the life of others. He died a true hero."

"His body was full of energy, his heart with pride and dedication, his calm demeanor resonated throughout the whole fire department," Columbian Fire Engine Company No. 1 Ex-Chief Mike Johnson said. "His training knowledge and ability and his willingness to share his experiences helped him rise to the ranks of Lieutenant. The only thing more important than putting out a fire was his family. The safety of his fellow firefighters at the public and the end is pure selfless dedication cost him his life."

A procession carried Lloyd's body into the stadium and was escorted by the Rockland County Police Emerald Society Pipes and Drums Band.

"Jared has been a good son, always loved putting his life before others, he had a passion for service since high school," Lloyd's mother said. "He was very proud to be part of the Colombian Fire Engine Company Number one, which became a second family. Even when they're obstacles along the way, Jared, always persevered, because this was his calling. Jared will always be my hero and his legacy will be forever in my heart. His grandsons will know how much their father loved them, and how he sacrificed his life to save others. We thank you for celebrating my son Jared Lloyd, and for respecting our privacy during his most difficult time. His life and memory will live on forever."

Following the funeral, there was a procession that went down Route 45 to Route 59, up West Street to Lloyd's Columbian Firehouse for a ceremonial "last call," west on Maple to Route 306, then north on Route 306 to Brick Church Cemetery.

The route was lined with well-wishers eager to pay their respects to the volunteer firefighter who paid the ultimate sacrifice.

Firefighters from Westchester, Bergen and Orange County are filling in today for Rockland County firefighters as they take the day to remember the Lloyd.

The 35-year-old father of two died on Tuesday, March 30 after he ran into an assisted living facility to save residents during a massive fire.
EMBED More News Videos


"His loss is devastating," Rockland County Executive Ed Day said. "His loss and his heroism will never be forgotten."

Lloyd had served the Spring Valley Volunteer Fire Department for 15 years. His day job was with the cable company Altice, which put out a statement saying how much he'll be missed.

Officials say that an investigation into the deadly fire could take several weeks.