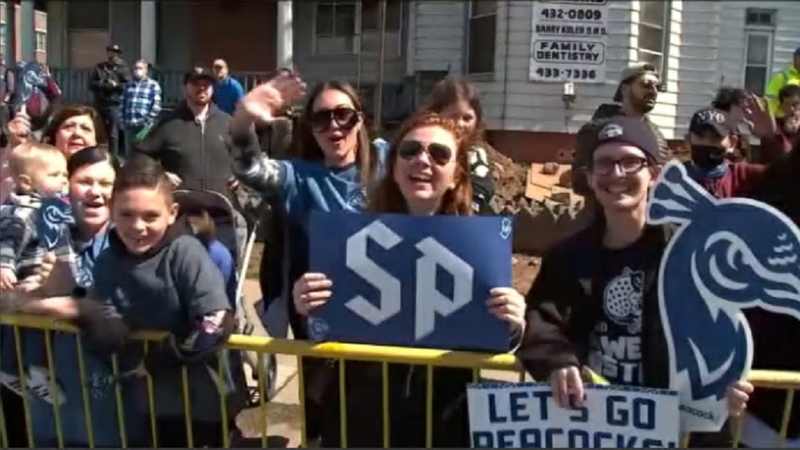 JERSEY CITY, New Jersey (WABC) -- The St. Peter's men's basketball team was celebrated with a parade and ceremony after their bracket-busting performance in the NCAA tournament.

St. Peter's was the Cinderella story of the NCAA tournament, breaking brackets and beating much larger teams.

"The team did an amazing job no matter what end result is they are still amazing," fan Denise Miller said.

"It's peacock pride, absolutely. I'm here to show it," another fan said.

"When I tell you this is a big thing for Jersey City, it's a really good thing," Wanda, a Jersey City employee, said.

"It's a fantastic day welcome to Peacock nation. I'm honored to be a graduate of St. Peter's. What a better way to celebrate with a fantastic group," he said.

The Peacocks made history by becoming the first number 15 seed to reach the NCAA Tournament's Elite 8.

Students on the campus couldn't be more proud of their team.

They exploded with excitement inside the school gym after their historic win over Purdue.

The Peacocks weren't able to pull off a win over eight seed University of North Carolina.


But Jersey City's mayor, and the rest of the community, still wanted to celebrate the team for their hard work.

Just days ago, Seton Hall announced that St. Peter's head coach Shaheen Holloway is leaving the Peacocks and heading there.

Multiple players attended the press conference to show their support.

"They got the best. Honestly, really do. So they better be ready to work. We're going to miss him a lot. He's done a lot for us. The whole team," said Doug Edert, St. Peter's basketball player.

"I wouldn't be up here if it wasn't for those 15 young men right there. They, those guys changed my life. I'm very grateful. Thank you guys," Holloway said.